‘Don’t Be Evil’? GOOGLE Is Becoming A Police State

Google employees are creating their own enclave of mandatory wokeness, but they're not content to keep this ideological policing within their own walls. 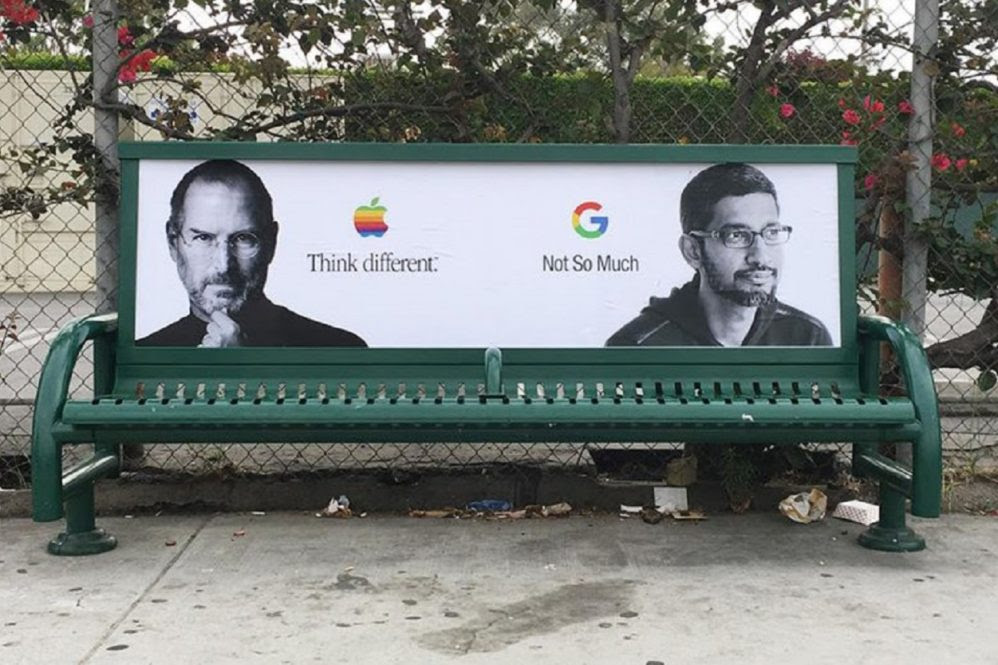 
Back in the day, Google famously adopted the corporate motto, “Don’t be evil.” It hasn’t turned out so well.
The problem is that their motto didn’t define what constitutes evil, so it left an opening for narrow-minded zealots to commandeer company resources in a witch hunt against whatever they define as the forces of wickedness. That’s what has happened at Google, which has adopted a corporate culture of quasi-totalitarian ideological uniformity that it is now starting to impose on everyone who uses its services. Which is, let’s face it, pretty much everyone. For now.
Google’s internal culture has been laid bare by James Damore’s lawsuit alleging employment discrimination. The picture we get is a corporate culture of lockstep ideological uniformity, enforced by censorship, badgering, and blacklisting. Damore furnishes one note from a Google manager in 2015, addressed to “hostile voices.”

I will never, ever hire/transfer you onto my team. Ever. I don’t care if you are perfect fit or technically excellent or whatever.
I will actively not work with you, even to the point where your team or product is impacted by this decision. I’ll communicate why to your manager if it comes up.
You’re being blacklisted by people at companies outside of Google. You might not have been aware of this, but people know, people talk. There are always social consequences.

Another manager proposed creating a “public-within-Google” document that “calls out those googlers who have made public statements that are unsupportive of diversity.” Other admit to maintaining their own blacklists based on “opinion[s] about religion, about politics, or about ‘social justice.'” While conservatives were regarded as “bad apples” to be excluded, other Googlers were recruiting or advocating for violent leftist “antifa” groups, with no apparent consequences. Then there’s this doozy:

Google’s internal company systems allowed employees and managers to maintain a ‘block list’ of other employees with whom they did not wish to interact. For example, if A adds B to her block list, B is not able to look A up in the company directory, communicate with A through the internal instant messaging system, view A’s contact information or management chain, or see A’s posts on internal social media. A and B would not be able to work together constructively on an engineering project if either person blocked the other.

Sounds like a great way to do business.
“Peer bonuses” that were supposed to reward Google employees for outstanding work performance were also used, with management approval, to reward them for arguing against heterodox political views, while something called “social pecking” was used—”unambiguously,” in the words of one Google vice-president—to gang up on dissenters. If you read through the whole complaint you see what this kind of “pecking” looks like, and it looks a lot like—well, it looks a lot like angry political Twitter, complete with people lobbing obscenities at each other over politics.
What company in its right mind would encourage its employees to treat each other this way? Well, maybe a company that is not in its right mind. An internal presentation urging sensitivity for employees who are “living as a plural being”—which seems to refer to some kind of multiple personality disorder—lists one of the forbidden thoughts: “assumptions that we’re mentally damaged.” This is literally an environment where the insane are welcome and the sane are not.
All of this is part of a wider trend in Silicon Valley toward enforcing political conformity. Commenting on this trend a few years back, when some people were trying to blacklist Silicon Valley Trump supporters like Palmer Luckey and Peter Thiel, I wrote: “The logical conclusion, when you think about it, is that every company should have a Chief Political Officer in charge of monitoring the ideological deviations of its employees.” We can now see that Google is going one better. It has a whole culture of co-workers informing on each other and referring dissidents for what the Damore lawsuit calls “crowdsourced harassment.” I call it the self-enforcing police state.
Google is a private company and can create its own little enclave of mandatory wokeness if it likes, Damore’s lawsuit notwithstanding. The problem is that Googlers are not content to keep this ideological policing within their own walls. We discovered recently that when Donald Trump complains about “fake news,” that makes him the very worst threat in the entire world to freedom of the press.
But what happens when the Left inveighs against “fake news”? What happens is what Google just did to conservative websites—including The Federalist. David Harsanyi runs down the supposedly contested claims that Google has decided to flag for our Web site. It targets claims we didn’t make, links to debunkings that don’t address us, treats ideological partisans as if they are impartial fact-checkers, and applies scrutiny to publications on the Right that it doesn’t apply to those on the Left.
None of this makes sense if you view it as an objective attempt to police accuracy. It makes perfect sense if you view it as an attempt to pre-emptively discredit Googlers’ ideological enemies in the minds of unwary Google users. I don’t think this is going to be very effective, because it depends on Google users acting like Google employees and volunteering to enforce groupthink on themselves. But it is revealing about Google’s intent.
Some on the Right are responding to this by calling for Google to be regulated as a monopoly. That’s the best way to ensure that nothing changes. Regulating search engines as a public utility would tend to freeze the leading company in place, as regulators did with AT&T back in the day, and discourage new competitors from entering the field. Instead, let the market do its work. All the things that make me outraged about Google’s crusade for political correctness also strike me as signs of enormous weakness for the company, both internally and externally.
Internally, Google has the hallmarks of a company being run for its employees, to accommodate their private agendas, petty political vendettas, and weird psychological dysfunction—not to serve the interests of its shareholders, customers, or users. It’s clear from the documents in the Damore suit that there has been a disgruntled faction of right-leaning employees inside Google who have been complaining to the HR department about their treatment, but at this point, I doubt many of them will want to stay. There is already a steady trickle of Silicon Valley refugees, like Tim Ferriss and Sam Altman, fleeing what Ferriss calls “a peculiar form of McCarthyism masquerading as liberal open-mindedness.”
The other news from the lawsuit is that Google seems to have a very active HR department and a lot of mandatory internal meetings, which is also a bad sign. I expect that talented young engineers with nonconformist ideas won’t risk wasting years of their lives in such a repressive multi-layered bureaucracy. In short, the same impulses that led Silicon Valley entrepreneurs to upend established industries will now be working to upend Google.
Externally, Google’s whole business model is based on the fact that we let them relentlessly collect our data and mine it for information about our behavior and preferences. They’re trying to go even farther and get us to invite Google’s AI assistant into our homes, so they can monitor our lives in even finer and more intimate detail. If that’s their business plan, perhaps gaining a reputation as the PC thought police isn’t the best idea.
There is currently no good alternative to Google’s search engine—readers have recommended them to me, but so far none of them work half as well—or to some of its other services, like Web ads. But I’m certainly not going to volunteer to make any part of my life or my business too dependent on a Google product, and I’ll be eagerly looking for alternatives. Google isn’t quite 20 years old, and its dominance over the flow of our information is very, very recent in the scheme of things. It rose up by outmaneuvering bigger and more established rivals, and somebody can do the same to them.
If I were a tech entrepreneur, I would be slavering at the prospect of getting rich by knocking down such a bloated, bureaucratic, arrogant company. They’re practically asking for it, so get to work.
Source>http://thefederalist.com/2018/01/12/dont-be-evil-google-is-trying-to-become-a-police-state/
Posted by theodore miraldi at 4:17 PM