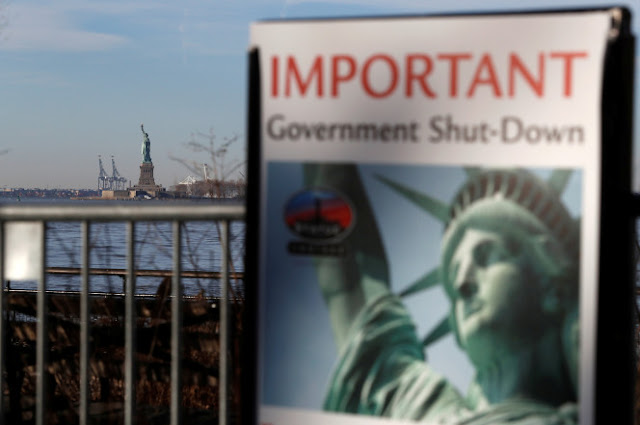 
Gov. Cuomo says he’s ready to sail to the rescue of tourists eager to visit Lady Liberty.
Cuomo on Saturday offered to pony up state cash to reopen Liberty Island, which was shuttered by the federal government shutdown.
“How do you close the Statue of Liberty? It’s the symbol of New York, it’s the symbol of America,” Cuomo asked reporters after he wrappeed up a breakfast with womens’ march activists in Midtown.
“I’m volunteering that the state will pay to keep the Statue of Liberty open.”
Cuomo came to tourists’ rescue during the 2013 government shutdown by kicking in about $250,000 in state money to reopen Liberty Island.
But the state cash didn’t get the tourist boats sailing to Liberty Island until the 12th day of that year’s 16-day government shutdown.
Early-morning tourists on Saturday got a disappointing real-life civic lesson when they arrived at the Battery Park docks and found that boat trips to the Statue of Liberty and Ellis Island were canceled.
The National Park Service said the islands were closed “due to a lapse in appropriations.”
“We spent a lot of money; we got up early,” griped Catherine Jones, 27, from England. “And it’s all completely shut down! I couldn’t believe it.”
“We’re bummed. We came from California for this,” added Emily Dehesa, 21. “This is America for you.”
Tourists who hoped to visit Lady Liberty up close and personal were able to trade their tickets for an hour-long harbor tour that let them see her from the water, an offer that some grudgingly accepted.
Others took a refund and trudged off to non-governmental hot spots.
“It’s my birthday actually, and we were going to go to the Statue. That’s what I wanted to do,” said Juan Martinez, 32, of Chicago. “We didn’t think the government shutdown would shut down the Statue of Liberty.”
Source>https://nypost.com/2018/01/20/federal-shutdown-closes-statue-of-liberty/
Posted by theodore miraldi at 1:13 PM