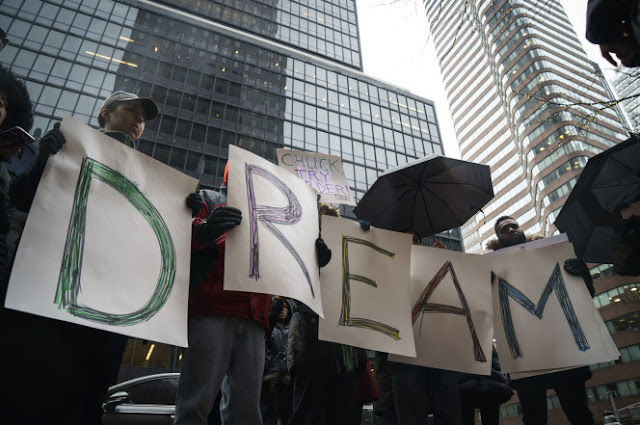 Could the fight over the Dreamers finally get the Supreme Court to put its foot down on the campaign by liberal district judges to foil Donald Trump’s presidency? It looks like we could find out.
That’s because of the announcement this week that the Trump administration will try to go back to the Supreme Court over the latest orders from a judge in San Francisco who blocked the president’s immigration policy partly because he sniffed a “plausible inference” of “racial animus.” Trump called this “outrageous,” and Attorney General Jeff Sessions vowed to appeal.
At issue is whether Trump can use his executive authority to enforce the law and undo President Barack Obama’s use of his executive authority to skirt the law.
The Dreamers are caught in the middle, and so am I. I’d keep the vast majority of these dreamers who were brought here as minors. We’re lucky to have them, from wherever they came.
The law, though, is with Trump. Nor is he the only one fuming at efforts of liberal judges to curb his use of presidential powers.
The voters, to whom the immigration question was put in the 2016 election, decided for Trump (and the voters have their own constitutional powers).
This storm started in 2001, when two senators — Democrat Dick Durbin and Republican Orrin Hatch — introduced the Development, Relief and Education for Alien Minors Act. The Dream Act was designed to address the plight of the hundreds of thousands of illegals who came here as minors and grew up to be, essentially, Americans.
It’s a tragedy that Congress failed to act back then. Particularly because a bipartisan majority in the Senate was prepared to pass the measure. (It failed to get cloture.)
Obama got so frustrated that he established the policy called Deferred Action for Childhood Arrivals. Because Congress wouldn’t change the law, Obama decided, he wouldn’t enforce it.
Trump is taking the opposite view. He’s saying he’ll enforce the law — meaning deport the Dreamers — unless Congress changes it. He has conditions (like the Wall) that the voters asked for in 2016.
You’d think that would be a cinch. But only if you haven’t read the opinions raining down from the bench of Judge William Alsup of the Northern District of California.
The judge concluded that such plaintiffs as Janet Napolitano, Obama’s erstwhile secretary of homeland security, are likely to win their case against Trump’s recission of Obama’s program. Alsup reckoned that the Trump administration’s recission of DACA was, among other things, “arbitrary” and “capricious.” Never mind that Trump and Hillary Clinton had spent nearly $2 billion arguing about it.
An argument Trump won.
Alsup followed that up three days later with the business about the “plausible inference” that it’s all being based on bigotry. On what basis did His Honor come to that decision?
Plaintiffs, it seems, have alleged that it was Trump himself, not the acting secretary of homeland security, who “directed the decision” to end DACA.
And why would that be a problem? Because Trump’s action was — wait for it — “in line with his campaign rhetoric.”
This may be the first time in history a court suggested it would be illegal for a president to keep a campaign promise.
What’s the point of having the confounded election to start with? Why not let the federal district judge in California run the entire country?
The judge’s decision isn’t final, of course. The details in the dispute haven’t yet been fully heard. That, though, just means the president can be stymied on a mere allegation.
No wonder Trump is going directly to the Supreme Court. As recently as December the nine justices sharply rebuked Alsup on a procedural matter — and with no dissent.
Some of the cagiest court-watchers wonder whether Trump is merely playing for time. After all, the court case is being played out against the backdrop of Trump’s negotiations with Congress.
Either way, the Supreme Court ought to tell Alsup to stay out of politics. Otherwise, at the rate he’s going, he’s apt to order the country to hold a new election.
Source>https://nypost.com/2018/01/17/judges-need-to-stop-trying-to-annul-trumps-election/
Posted by theodore miraldi at 4:17 PM