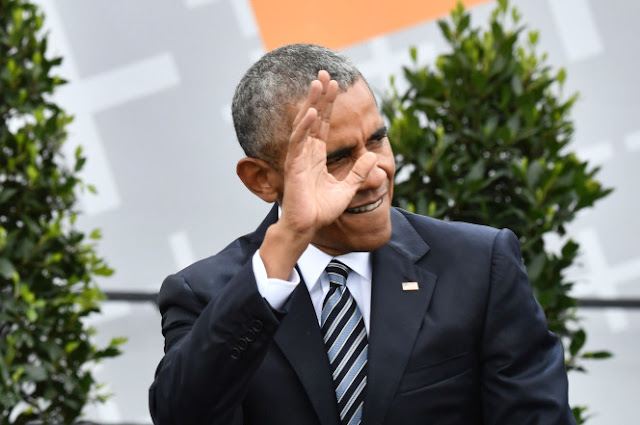 In a moment of woeful irony in the Obama-administration documentary “The Final Year,” UN Ambassador Samantha Power travels to Cameroon to offer photo-op comfort to families terrorized by Boko Haram — only to have her motorcade kill a 7-year-old boy.
Greg Barker, the director of this fan film, does his best to downplay the accident: It is discussed while we watch a clip of Power’s convoy moving at a crawl when in fact it was reportedly traveling at over 60 miles an hour when it struck the boy.
Despite Barker’s intentions, the handiwork of the Road to Hell Paving Co. is obvious. Team Obama, with its let’s-hug-it-out attitude to world conflict, left a bloody trail.
“The Final Year,” which is playing on a few screens ahead of its debut on HBO in May, drew notice for a scene in Power’s apartment on Election Night 2016. She invited the camera crew to film her party with the world’s 37 female ambassadors to toast the inevitable Hillary Clinton landslide. Power’s fist-pumping as she watches the election returns turns to blanching, but it’s Deputy National Security Adviser Ben Rhodes who has the most amusing reaction to Donald Trump’s victory.
Asked whether a Trump administration might endanger his accomplishments, he says, “I’ve never really considered that.” So what does the speechwriter and former aspiring novelist have to say when Trump wins? “I mean, uh, I can’t even [long pause] I can’t, I ca - - [long pause] I mean I, I can’t, I can’t, I can’t put it into words. I don’t know what the words are.”
“The Final Year,” though, is chiefly a study of Obama-administration foreign policy as overseen by Secretary of State John Kerry, Power and Rhodes. The foreign-policy masters see their three accomplishments as the Paris Climate Accord, the opening to Cuba and the Iran deal.
Given that the former was nonbinding and later dumped by President Trump, while the other two amounted to making concessions to American foes in exchange for virtually nothing, this is a bit like bragging that you suckered the Franklin Mint into giving up a souvenir Elvis plate for only $34.95.
But to understand why Rhodes and Obama are so pleased with their foreign policy, you have to understand the way they think. The documentary is revealing about that.
Naïvety, meet arrogance. These were the guiding forces behind the Rhodes-Obama foreign policy. The arrogance came in thinking that all previous administrations were too thick to come up with this awesome idea Rhodes had: Military force is bad.
No one figured this out before Ben Rhodes. “In Washington,” he says, “there is a kind of default that we’ve been trying to break. Which is that the way in which we demonstrate that we’re serious about a problem is by using military force.”
This, the film backs with images of the bombing of Laos during the Vietnam War. In a Rhodes-written speech, Obama is seen saying, “We must change our mindset about war itself. To prevent conflict through diplomacy.” It’s like the old Monty Python lesson about how to play the flute: It’s easy. You just blow in one end, then move your fingers up and down over the holes.

Blame Obama for Dreamers’ dilemma and other comments

Obama's vanishing legacy, both parties are stuck in fantasyland and other comments

Actual events don’t align with the Rhodes-Obama rhetoric. Vladimir Putin, frustratingly, keeps failing to be bent by the Arc of History(™) and doing whatever he wants, seizing Crimea and abetting Bashar al-Assad.
“The error that we may have made is Putin doesn’t seem to pursue Russia’s national interests. He pursues Putin’s interests,” Rhodes says. In other words, surprise! — Putin doesn’t share a liberal American Democrat’s vision about what’s best for Russia.
Kerry, after Russia breaks the ceasefire in Aleppo in 2016: “It’s just so frustrating because we really had an agreement that could have worked. And unfortunately we have some people who didn’t want to cooperate.”
So “The Final Year” is about the Obama Doctrine, also known as hashtag diplomacy, also known as leading from behind, also known as voting “present” — also known as hands-off.
Summing up, I give you none other than Samantha “Soft” Power herself, who near the end of the doc says in a moment of sudden clarity: “My world is a world where you have 65 million displaced. Yemen and Syria and Iraq, Nigeria, Cameroon and Chad, Central African Republic, Burundi, South Sudan, Darfur . . . There are concerns about terrorism, and there is a fear of the other and . . . all the trendlines — on democracy, right now, at least — are going in the wrong direction.”
If only she or her friends had held positions of authority, maybe they could have done something about some of that.
© 2018 National Review. Used with permission.
Source>https://nypost.com/2018/01/26/new-film-accidentally-exposes-team-obamas-foreign-policy-naivety/
Posted by theodore miraldi at 9:58 AM