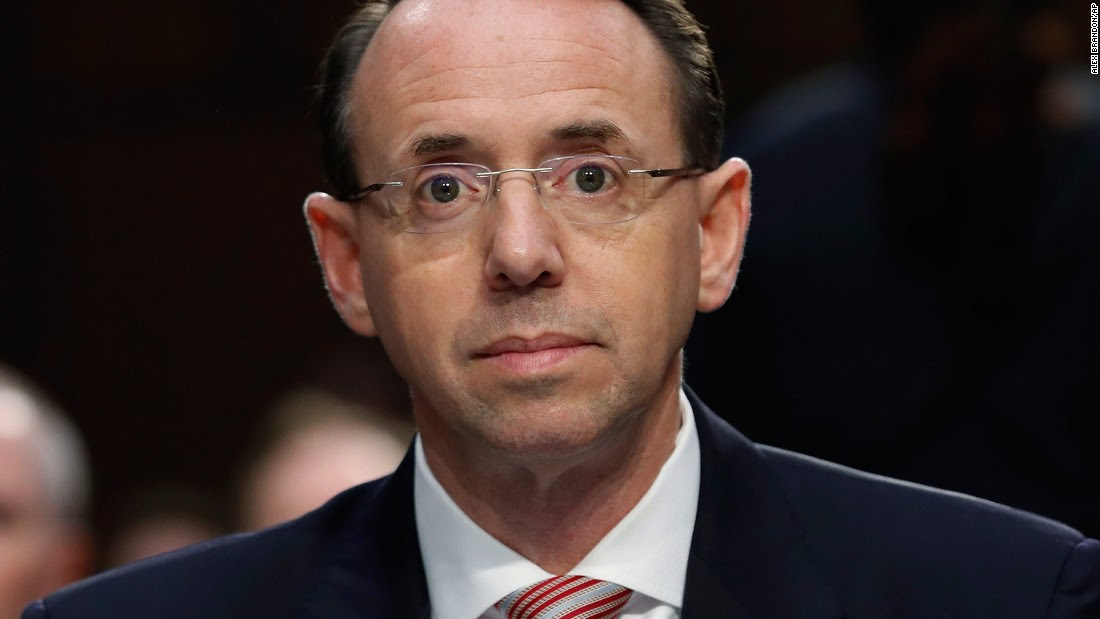 
A controversial and classified memo shows that Deputy Attorney General Rod Rosenstein okayed an application shortly after taking office last year to monitor a former Trump campaign associate, according to a report.
The Department of Justice under President Trump extended surveillance on Carter Page, believing that he was acting as a Russian agent, the New York Times reported late Sunday, citing people familiar with the memo’s contents.
The document faulted the FBI and the DOJ for failing to completely explain to the intelligence court judge in seeking the warrant that they were relying on information supplied by Christopher Steele, who compiled the disputed dossier that contains unsubstantiated claims about Trump’s ties to Russia, the newspaper said.
Research for the dossier had been paid for by Hillary Clinton’s presidential campaign and the Democratic National Committee.
A number of top DOJ officials can approve such surveillance but the responsibility usually falls to the deputy attorney general, the newspaper said.
The report also said the FBI and the DOJ did nothing improper in seeking the surveillance warrant against Page, who was part of the campaign until September 2016.
A White House spokesman said Trump wants “transparency throughout this process.”
“Based on numerous news reports, top officials at the F.B.I. have engaged in conduct that shows bias against President Trump and bias for Hillary Clinton,” Hogan Gidley told the Times.
“While President Trump has the utmost respect and support for the rank-and-file members of the F.B.I., the anti-Trump bias at the top levels that appear to have existed is troubling.”
The FBI had been keeping an eye on Page for years and an investigation in 2013 showed that a Russian spy tried to recruit him.
But a visit to Russia in July 2016 when he was working with the Trump campaign renewed the bureau’s interest and they began monitoring him again that fall, the Times said.
That surveillance led the FBI and DOJ to seek to renew the application in the spring of 2017, shortly after Rosenstein was confirmed in April, the newspaper said.
Trump has had Rosenstein in his crosshairs, venting to staff his frustration with the DOJ’s No. 2 and mulling whether he should fire him, according to reports.
Rosenstein appointed Robert Mueller to investigate Russian meddling in May 2017 after Trump fired former FBI Director James Comey, who had been heading up the probe.
Trump wanted to fire Mueller last June, but backed off after White House counsel Don McGahn threatened to resign, the Times reported last Friday.
The White House and some Republican lawmakers are calling for the memo to be declassified and released to the public to show how the agencies are biased against the president.
But Democrats who have seen the four-page memo — written by House Republicans — say they carefully selected information that is intended to discredit the investigation into Russian involvement in the election and any collusion on the part of the Trump campaign.
The DOJ called efforts to release the memo “reckless” without the department and the FBI first being able to review the document to see if it harms national security.
Source>https://nypost.com/2018/01/29/team-trump-thought-carter-page-might-be-a-russian-spy/
Posted by theodore miraldi at 2:06 PM