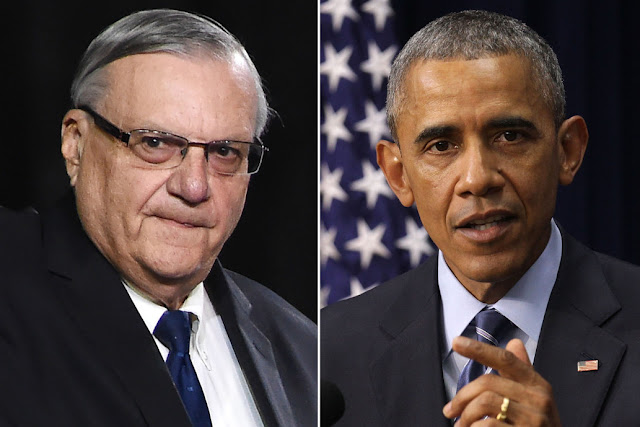 Disgraced Arizona lawman Joe Arpaio on Wednesday renewed crazy claims that former President Obama’s birth certificate “is a forgery” – and wants Congress to investigate that conspiracy theory instead of Russia.
The former Maricopa County sheriff, running for the seat of retiring US Sen. Jeff Flake (R-Ariz.), told WABC radio hosts Rita Cosby and Curtis Sliwa that Russian interference in the 2016 election should take a backseat to his baseless claim about Obama’s birth.
“They’re (Congress) too busy talking about Russia,” said Arpaio, who insisted he has proof that Obama wasn’t born in the United States. “We came up with some more, new information, not that we need it, but you’ll hear more about it.”
Arpaio, 85, said he doesn’t care what blowback he suffers from propping up the long-discredited “birther” movement.
“I’m not gonna back down on this. I don’t care if I lose elections or anything,” said Arpaio. “I’m going to tell you again that that document is a forgery.”
Arpaio was convicted of criminal contempt of court for ignoring judicial orders to stop profiling Latino drivers. He faced a maximum sentence of six months in jail, before President Trump pardoned him this past August.

Arpaio said if he wins Flake’s seat, he’ll introduce legislation to make presidential candidates prove they were born US citizens.
Conspiracy theorists have long doubted that Obama was born in the United States – despite a birth certificate showing he was born on Aug. 4, 1961 in Honolulu.
Obama’s birth was also announced, contemporaneously, in local newspapers.
“I want to get it to Congress. I want to get it to Congress so they can pass some type of law, regulation, that when somebody runs for president, you oughta check their background, so this won’t happen again,” said Arpaio, voted out of office in 2016 after 24 years as sheriff.
Source>https://nypost.com/2018/01/10/sheriff-joe-arpaio-revives-obama-birther-conspiracy/
Posted by theodore miraldi at 7:44 AM