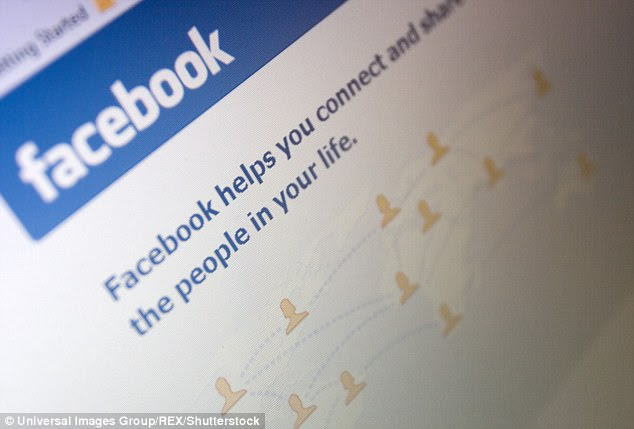 Scores of criminals are freely touting for business on Facebook and other sites.
Many are offering cannabis for sale while one dealer even offered to sell cocaine.
Social media sites were accused of failing to shut down ‘blatant’ law-breaking.
Calls for tougher sanctions over failure tech giants' failure to stop criminality.

Drug dealers are openly using Facebook to target children, a Daily Mail investigation reveals.
Scores of criminals are freely touting for business on the site and other social media giants including Instagram and Twitter.
Many are offering cannabis for sale. One dealer, when contacted, offered to sell cocaine. A reporter posing as a teenage boy found dealers on Facebook willing to supply him with drugs even when they knew he was still at school.
On Instagram, the picture sharing site owned by Facebook, an account with more than 22,000 followers appeared to be dedicated to verifying genuine cannabis dealers in the UK.
Last night, the social media sites were accused of failing to shut down ‘blatant’ law-breaking and of ‘aiding and abetting’ the sale of drugs. They have already come under fire for their alleged failure to restrict terrorist material or launch crackdowns on the activities of child abusers.
MPs and campaigners yesterday called for internet giants to face tougher sanctions over the continued failure to root out criminal activity.
A Government spokesman said: ‘We want the UK to be the safest place in the world to be online. Anything that is illegal offline should be illegal online. We encourage people to report [anything] concerning to the police as well as ... report such images to the app providers themselves.’
The Mail’s investigation followed a report earlier this month that warned that children as young as 13 were using social media to buy drugs online.
The report, from the charity Young Addaction, said dealers were using hashtags and emojis to advertise their wares, with a big rise in the trend in the last 18 months.
Now the Mail has found evidence of the alarming scale of drugs now being advertised on sites that are hugely popular with youngsters. Our reporter was able to find drugs offered for sale on Facebook, Instagram and Twitter within five minutes. 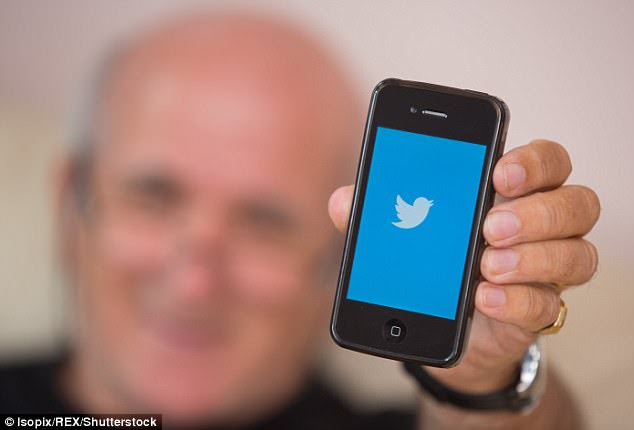 +4
Scores of criminals are freely touting for business on the site and other social media giants including Instagram and Twitter
The sites were found to host thousands of posts and accounts linked to dealers and abusers. Pushers use emoji codes and hashtags – including #weed4sale – to attract buyers.
They use photography via Instagram to flaunt their stock and direct customers to their account on encrypted messenger app Wickr. Illegal deals are then arranged on the free app without fear of police accessing the messages.
Cannabis dealers provided a menu of both home-grown and imported marijuana in stock. Posing as a schoolboy, our reporter contacted two Facebook pages pedalling drugs online, and both immediately agreed to sell.
One page, which the Mail has chosen not to name, featured pictures of bags of drugs. Minutes after a sending a message, a man called back using the alias of a Tottenham footballer offering two grams of ‘banging Charlie’ [slang for cocaine] for £120 or some ‘great weed’.
He was unconcerned at being told the would-be buyer was still at school.
Another Facebook page provided a price list featuring an array of cannabis products costing from £100 to £350. One of its sister sites was shut down last week after the Mail got in contact. But yesterday afternoon there were at least four other sites advertising drugs with the same contact details. 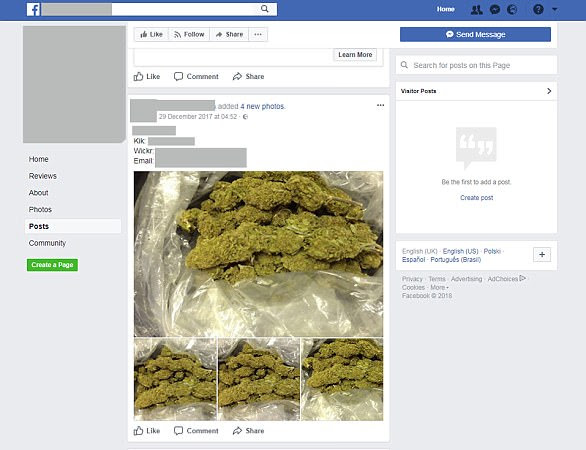 +4
Shameless: One of the Facebook pages advertising cannabis
FACEBOOK
A reporter was able to find dealers offering to sell ecstasy and cannabis on Facebook within minutes.
Cannabis appeared to be advertised on Facebook last month by a user in Bristol.
The page was deleted after the Mail alerted Facebook, but several other near-identical pages offering the drug with the same contact details were still live last night.
Posing as a schoolboy, the Mail contacted two other Facebook pages peddling drugs online, and both immediately agreed to sell.
One was unconcerned when told the would-be buyer is still at school, and told him to meet him in East London close to Canary Wharf to complete the deal.
Another site provided a price list of cannabis products costing from £100 to £350 when contacted. The dealer told the reporter to send a Post Office MoneyGram and he would deliver to his address.
The undercover reporter emailed back: ‘Will it be well disguised because I don’t want my mum to notice it if it arrives while I’m at school?’ The dealer replied, ‘Yeah mate it’s well packaged and sealed.’
INSTAGRAM
Scores of Instagram account holders were found to be posting photos of cannabis for sale.
Some dealers even posted menus of what was available to buy if customers got in touch using their Wickr username – an encrypted messenger app.
Using Wickr, a reporter found dealers across the UK willing to sell and post drugs.
One dealer even offered to include a free gram as it was the first order.
TWITTER
It took less than two minutes for us to find a US dealer willing to ship 150 ecstasy (MDMA) pills to London.
The dealer had posted scores of photos of pills and cannabis – urging buyers to get in touch.
Through Wickr he offered to send our reporter 150 Class A MDMA pills for £1,630 using a ‘scout’ in the UK.
Drugs are also offered on Instagram. One dealer posted a photograph of two large bags of cannabis on Instagram, urging potential customers: ‘Don’t miss out.’
Other boasts included ‘we provide the most official delivery service’ and ‘get it delivered the next day’.
Punters are even offered a menu of different types of powerful cannabis with names including ‘alien glue’. A pusher from the US advertising on Twitter offered 150 ecstasy tablets – a Class A drug – for £1,630 via the Wickr messaging service.
It is illegal to possess Class B cannabis in the UK and those caught dealing it face up to 14 years in prison. But youth drug worker Nick Hickmott, of charity Young Addaction, said drug dealing online was increasing and internet firms were ‘turning a blind eye’. He said Instagram was the ‘preferred choice’ among cannabis dealers, adding: ‘It is just so blatant.
‘It is unbelievable that it is allowed to operate like that. They are the only ones that have the power to police it. If these big multimedia companies wanted to do something about it they could.’ 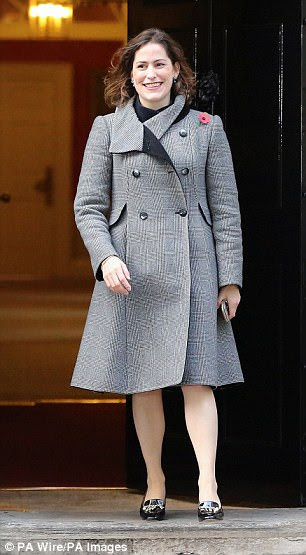 +4
Home Office minister Victoria Atkins encouraged people to report illegal online material to the police
Mr Hickmott claimed that the picture sharing apps Instagram and Snapchat tended to be the platforms most used for dealing. The Mail’s investigation now proves reports that dealers were sharing images of the drugs before providing alternative contact details.
David Green, of the Citivas think-tank, said social media firms could find themselves criminally responsible if they did not do enough to stop blatant criminality.
He said: ‘It is another example of an organisation that claims to be nothing more than a platform that in this case is aiding and abetting the sale of illegal substances.’
Labour MP Helen Goodman, a former shadow culture minister, last night said: ‘This is yet another example of social media firms denying the power and influence they have and failing to act as responsible citizens. It will reach the point with these social media companies where there are so many problems that the Government must ... start looking at both legal changes and proper enforcement.’
Home Office minister Victoria Atkins said last night: ‘We want the UK to be the safest place in the world to be online. Anything that is illegal offline should be illegal online. We encourage people to report concerning material to the police as well as using the in app tools to report such images to the app providers themselves.’
Last night, a Facebook spokesman said: ‘We encourage our community to report any activity like this using our reporting tools so we can quickly remove it.
‘We recently announced we’ll be doubling our security team to 20,000 people over the next year to improve how we detect and remove content that shouldn’t be on Facebook.’ Instagram said it encouraged users to report illegal activity. Twitter said all users must agree not to use the site for unlawful purposes. A spokesman said account holders were not allowed to use it for ‘any unlawful purposes’.
He added: ‘By using Twitter, you agree to comply with all applicable laws governing your online conduct and content.’
Source>http://www.dailymail.co.uk/news/article-5269267/Drug-dealers-using-Facebook-target-children.html
Posted by theodore miraldi at 9:49 AM