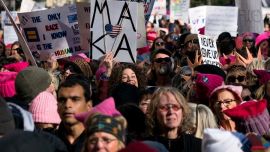 
One year ago this weekend, liberal women flowed into our nation’s capital and other cities across America for a march to protest the inauguration of President Trump. And on Saturday, women and some male supporters again gathered in Washington and hundreds of cities to protest against the president and in support of protection for illegal immigrants and other liberal causes.
While the Saturday protests were underway, Congress was trying to figure out how to reach agreement on a spending bill to end the government shutdown that began Saturday morning.
Donning pink hats resembling women’s sacred body parts suddenly exposed for all to see, protesters last year expressed fury that against all odds a white, male Republican who never before held public office somehow bested their longtime feminist-in-chief Hillary Clinton. How dare he stop Hillary from shattering the glass ceiling!
The glass ceiling the protesters had envisioned shattering entirely was instead left in shards that got under their skin – deep under their skin.

After much public dialogue over the last year, the questions must now be asked: What exactly has the Women’s March accomplished and are the protesters capable of turning their angst into action? Will Saturday’s protests accomplish anything more, or just serve as a self-affirming feel-good moment for President Trump’s opponents?
While the Women’s March last year certainly served as an outlet for liberals to gather and share their “election depression,” there was no real call to action. There was no plan for attendees to return to their respective hometowns, run for office, nor do anything differently than they had done before the 2016 election. Quite frankly, without that kind of action the Women’s March risks becoming nothing more than annual group therapy.
Whether the protesters can now turn their angst into action remains to be seen. Thus far, the Women’s March already falls short on tangible results when compared to other recent populist movements.
By comparison, the Tea Party movement that sprang in the spring of 2009 accomplished far more in their inaugural year than the Women’s March has.
In record speed from the moment the movement was invoked on February 19, 2009 from the floor of the Chicago Mercantile Exchange – to the ensuing raucous Tea Party rallies that played out on the steps of cities from coast to coast – Americans watched as their government was taken back by the people.
However, the Tea Party movement didn’t stop at the rallies. They quickly rolled up their sleeves and got to work, putting aside their differences with their own party and often volunteering at local GOP headquarters, signing up for campaigns, knocking on doors and mobilizing “Get Out the Vote” efforts.
Unlike the Women’s March, the Tea Party movement’s swift action yielded instantaneous results that were impressive; record-breaking, in fact.
In 2010, just one year after launching, the Tea Party movement helped Republicans regain control of the House of Representatives. Credit was widely given to the Tea Party, which staged vigorous protests of Congress members’ town hall meetings back in their home districts, successfully shined a light on House races and made ObamaCare a central issue.
In 2014, the Tea Party movement helped Republicans win the U.S. Senate and win the largest Congressional majority in American history. With the staggering loss of 50 seats in Congress, Democrats suffered their largest defeat in decades.
And in 2016, in arguably a continuation of the populist revolution, the Tea Party helped put Donald Trump in the White House in what Politico called the biggest upset in American history.
The Women’s March has no such scalps on the wall. In fact, the movement hasn’t yielded any new stars.
Whereas the Tea Party movement spawned stars such as Republican Senators Tom Cotton of Arkansas and Joni Ernst of Iowa – both leaders in their respective classes today – no one has wanted to attach themselves to the Women’s March.
However, leaders of the Women’s March may have realized their risk of falling into political oblivion, because the organization announced new components to Saturday’s marches.
The protesting women are launching a nationwide voter registration campaign to recruit more women to vote, and aim to affect the midterm elections in November.
The strategy just might work as the Women’s March has joined forces with Rock the Vote, a movement that registered youth to vote in the 1992 presidential election and impacted the presidential race in favor of the saxophone-playing, boxers-or-briefs-clad Bill Clinton.

If the Women’s March is able to recruit talented people from Rock the Vote who succeeded in previous voter registration outreach campaigns, the group has a chance to deliver on its promise.

If the Women’s March is able to recruit talented people from Rock the Vote who succeeded in previous voter registration outreach campaigns, the group has a chance to deliver on its promise.
As the new year unfolds and the midterm elections loom, the Women’s March has a real opportunity to shift from “protest” to “pragmatism.”
Whether or not the Women’s March can make the transition will determine whether the movement is a force to be reckoned with, or will simply go down in history as a passing fad worth not much more than the cheap yarn from which its pink hats were spun.
Source>http://www.foxnews.com/opinion/2018/01/20/women-s-march-are-watching-movement-or-just-group-therapy-for-trump-haters.html
Posted by theodore miraldi at 11:42 AM