THIS is the concerning moment Chinese President Xi Jinping addressed his military forces amid rising tensions between the United States and North Korea. 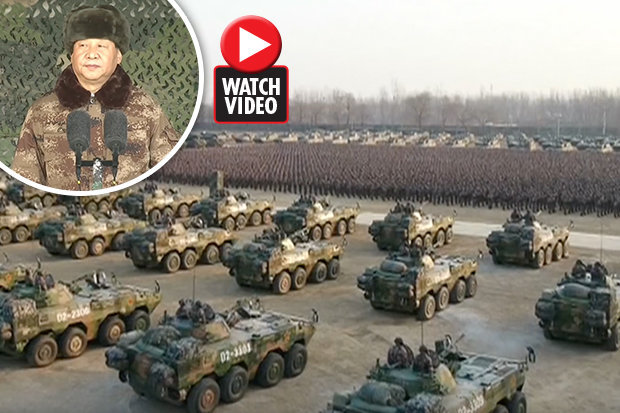 In the clip, filmed in Central Theatre Command on Wednesday, more than 7,000 Chinese servicemen await Xi's New Year orders.
As the camera pans through the crowd, it gives an insight into how regimented the world’s largest army is.
Speaking in front of thousands of troops and over 300 perfectly organised military vehicles, Xi – the Communist Party's General Secretary – ordered his forces to prepare for the event of war.
“Here I give my orders: the military at all levels should strengthen training and war preparedness.”
Chinese President Xi Jinping
"Here I give my orders: the military at all levels should strengthen military training and war preparedness.
“The military should continue to implement actual and joint trainings under combat conditions, and continue to conduct strict training in accordance with the Outline for Military Training and Evaluation.
“The military should hold training and competition with mass participation, strengthen tailored and adversarial training, enhance real combat capabilities, and master the skills to fight and win."
After Xi issued the orders, soldiers of the People’s Liberation Army took oath, standing in front of the military flag.
This clip comes following a rise in concerns over a potential North Korean missile launch.
On Wednesday, tensions heightened after US President Donald Trump took to Twitter to mock Supreme leader Kim Jong-Un over the size of his missile button as well as his "depleted and food-starved regime”.
It was also reported that China's Communist Party had adopted an undercover mission in September to bolster the North Korean government with increased weapon aid.
Military service is not mandatory in China, but the country still boasts the largest force in the world, with estimated numbers of almost 2,300,000 personnel.
Earlier today, shocking claims emerged that China could be aiming for "global domination by 2020".
And in October, at the 18th Communist Party congress, Xi outlined his plan to forge a “new era” for his nation as a global socialist superpower.
Source>https://www.dailystar.co.uk/news/world-news/671371/China-President-Xi-Jinping-prepares-army-for-war-USA-North-Korea-WW3-Nuclear-missile-video

Posted by theodore miraldi at 7:49 PM