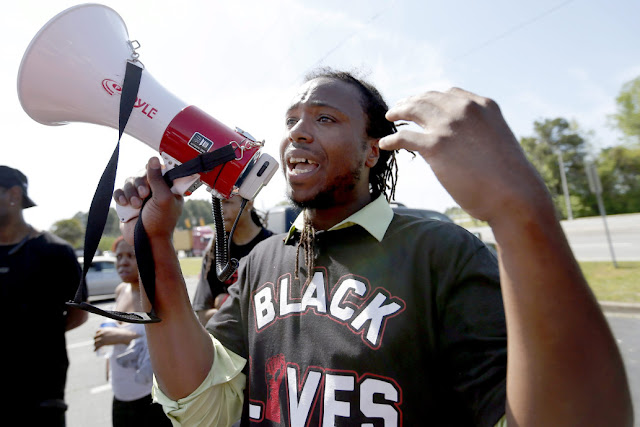 
The Black Lives Matter leader known for diving over a barrier to snatch a Confederate flag from a protester on live TV last year was shot dead in New Orleans, police said.
Muhiyidin Elamin Moye, who went by Muhiyidin d’Baha, was found dead Tuesday morning after being shot in the thigh while riding his bicycle, the Advocate reported.
New Orleans police spokesman Beau Tidwell said no information about a potential motive or suspects was immediately available.
D’Baha, 32, moved to South Carolina from Poughkeepsie, NY, when he was 13 and was in the Big Easy on a personal trip, his niece Camille Weaver told the Post and Courier.
“He loved Charleston and loved fighting for what’s right,” she said. “I’ve never met anyone more committed and hardworking than him. He was an asset to the Charleston community and will be greatly missed.”
The activist drew national attention last February when he was arrested for jumping over a barricade in an attempt to grab a Confederate flag away from a demonstrator at the College of Charleston.
Members of the South Carolina Secessionist Party had gathered to protest a lecture by activist Bree Newsome, who famously climbed the South Carolina capitol flagpole to remove its Confederate flag in 2015.
D’Baha was slapped with disorderly conduct charges as a result of the incident, which was caught on air.
“Not another generation of people are going to be intimidated by this flag,” he told the Washington Post after the incident, adding he’d tried to wrestle the flag away to “help them understand what it is to meet a real resistance, to meet people that aren’t scared.”
In the hopes of bringing d’Baha’s body back to Charleston for a funeral, his niece started a GoFundMe drive that had raised almost double its $7,500 goal by Wednesday.
Source>https://nypost.com/2018/02/07/black-lives-matter-leader-shot-dead/
Posted by theodore miraldi at 2:05 PM