Pelosi: 'Put an end to this charade'

You know the Democrats are in Trouble when they Stage Demands for their Base. Baseless Demands!
...tmiraldi 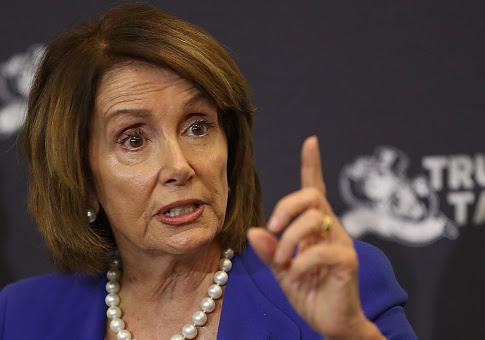 House Minority Leader Nancy Pelosi’s (D., Calif.) demand came in response to the revelation that after the original version of a controversial memo was voted on and approved for release by committee members, Nunes may have altered its contents in a version released to the White House. The classified memo alleges abuses by the FBI and Department of Justice in its handling of a surveillance operation against the president and his associates.

In a press release about the "partisan memo" from Pelosi’s office, she says Nunes’ actions make him unfit to serve as the committee's chairman.

"The decision of Chairman Nunes and House Republicans to release a bogus memo has taken the GOP’s cover-up campaign to a new, completely unacceptable extreme," Pelosi started off her letter to Ryan.

Pelosi said Nunes has disgraced the committee ever since beginning his tenure as chairman, claiming his "deliberately dishonest actions make him unfit to serve as Chairman, and he must be removed immediately from this position."

"House Republicans’ pattern of obstruction and cover-up to hide the truth about the Trump-Russia scandal represents a threat to our intelligence and our national security," Pelosi said. "It is long overdue that you, as Speaker, put an end to this charade and hold Congressman Nunes and all Congressional Republicans accountable to the oath they have taken to support and defend the Constitution, and protect the American people."

The Democratic leader said that as a result of his actions, the integrity of the House of Representatives is in jeopardy.

Senate Minority Leader Chuck Schumer (D., N.Y.) followed up with a letter of his own, the Hillreported.

"I urge to answer the preceding questions; remove Chairman Nunes from the [House] Intelligence Committee; withdraw support for the release of the … memo," Schumer wrote.

Posted by theodore miraldi at 7:21 PM