This same action is what started the Civil War. The Feds have to ACT FORCEFULLY NOW, or suffer the same consequences as our nation faced in 1861.
...tmiraldi In January, Oakland strengthened its commitment to being a “sanctuary city” by barring city employees from helping immigration agents — and local leaders braced for a showdown with President Trump. Shortly after the unanimous vote, Mayor Libby Schaaf (D) told a reporter that, yes, she would be willing to go to jail to “protect all of our residents regardless of where we come from.”
The defiant attitude has apparently remained unchanged.
On Saturday, Schaaf issued a news release, shared widely by her Twitter followers, warning that U.S. Immigration and Customs Enforcement “is preparing to conduct an operation in the Bay Area, including Oakland, starting as soon as within the next 24 hours.”
“As Mayor of Oakland, I am sharing this information publicly not to panic our residents but to protect them,” she said in the statement, adding that the information was based on “multiple credible sources.”
The San Francisco Chronicle reported that several people were detained by immigration authorities across the region on Sunday — in Pinole, El Sobrante, Napa and Atwater.
It was unclear if those actions, in cities beyond Oakland, were part of a larger sweep, but panic spread anyway.
Hotlines for immigrant advocacy groups were flooded with calls about reported ICE activity, the newspaper reported.
The mayor’s warning was the latest salvo in the debate over what, if anything, local and state governments should do to help federal immigration authorities. Sanctuary cities refuse to help federal officials carrying out immigration enforcement actions. Recently, Trump threatened to pull immigration agents out of California, and the acting director of ICE has said that local and state officials who adhere to sanctuary policies should be arrested.
Schaaf’s news release was short on detail. It didn’t provide times or locations or say how the mayor, who took office in 2015, had obtained information about an upcoming federal raid.
But it came a month after a Bay Area roundup and is similar to informal warnings that have circulated within immigrant communities for decades.
Schaaf’s news release directed worried people to Centro Legal de la Raza, an organization that offers legal aid to immigrant and Latino communities. The organization has an ICE activity tip line. 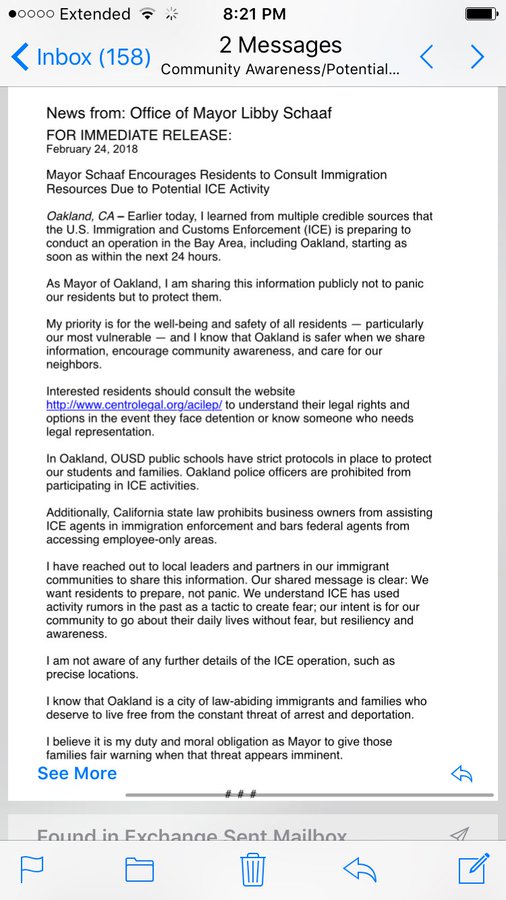 Twitter Ads info and privacy
“I know that Oakland is a city of law-abiding immigrants and families who deserve to live free from the constant threat of arrest and deportation,” Schaaf wrote. “I believe it is my duty and moral obligation as Mayor to give those families fair warning when that threat appears imminent.”
ICE officials didn’t immediately respond to a message seeking comment. In a statement to San Francisco ABC affiliate KGO-TV, ICE officials said, “There are ICE operations every day and it is unclear what the mayor is referring to.”
As The Washington Post’s Darla Cameron reported, Trump issued an executive order less than a week after taking the oath of office that would punish state and local governments that do not cooperate with federal immigration authorities.
That order denying federal funding to sanctuary cities was blocked by a judge in November. The judge ruled that it was “unduly coercive” and that it was unconstitutional to threaten funding “merely because a jurisdiction chooses an immigration enforcement strategy of which the President disapproves.”
Trump has argued that sanctuary cities endanger American lives by essentially harboring immigrants who are wanted for violent or serious crimes.
He lashed out after a 45-year-old undocumented immigrant was acquitted of murder and manslaughter charges in the 2015 killing of Kate Steinle.

Donald J. Trump
✔@realDonaldTrump
The Kate Steinle killer came back and back over the weakly protected Obama border, always committing crimes and being violent, and yet this info was not used in court. His exoneration is a complete travesty of justice. BUILD THE WALL!

Twitter Ads info and privacy
Jose Ines Garcia Zarate had been released from jail shortly before the killing. Federal authorities had asked the city of San Francisco to hold him, but the city denied the request because of its sanctuary laws.
[ U.S. police chiefs blast Trump for endorsing ‘police brutality’ ]
According to the Los Angeles Times, Trump and Attorney General Jeff Sessions have said local and state authorities should give immigration agents limitless access to jails so they can target people who are in the country illegally and detain or deport them.
Schaaf and other leaders in sanctuary jurisdictions have argued that their police, doctors and cities can’t be conscripted as de facto immigration agents. Becoming a sanctuary city — or a sanctuary state, as California did in October — codifies that stance.
Alameda County, which includes Oakland, also shelled out $1 million for a rapid-response hotline aimed at helping residents who are swept up in an immigration raid, according to San Francisco CBS affiliate KPIX.
But even if Trump is thwarted by municipal policies and by the courts, leaders in sanctuary cities realize he has something else at his fingertips: the entire federal immigration apparatus.
According to the San Francisco Chronicle, federal immigration agents raided 77 Northern California businesses in one week in January, asking the detained for proof that they were allowed to work in the country. There have also been large-scale sweeps in the southern part of the state.
Even as the sweeps were ongoing, they were being factored into the debate on sanctuary cities.
“Uncooperative jurisdictions,” ICE spokeswoman Sarah Rodriguez told the L.A. Times, have forced ICE agents to “conduct at-large arrests in the community, putting officers, the general public and the aliens at greater risk, and increasing the incidence of collateral arrests.”
Source>https://www.washingtonpost.com/news/post-nation/wp/2018/02/25/oaklands-mayor-just-warned-the-sanctuary-city-about-a-potential-ice-raid/?utm_term=.54c6569771ed
Posted by theodore miraldi at 8:09 AM