DNC'S $300,000 PAYMENT WAS MADE AS STATE DEMOCRATIC PARTIES WERE WAITING ON PROMISED FUNDING 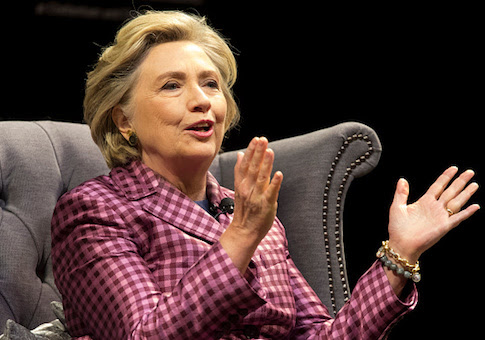 
The cash-strapped Democratic National Committee (DNC) and the Democratic Congressional Campaign Committee (DCCC) have combined to pay Hillary Clinton's "resistance" group nearly $900,000 for list acquisitions, Federal Election Commission filings show.
The DNC, which is in the midst of facing financial hardships, conjured up $300,000 on Jan. 8 to pay Onward Together, Clinton's group, for "list acquisition," according to the FEC filings. The payment was made to Clinton's organization as state Democratic parties were waiting on $10 million in funding for rebuilding efforts that was initially promised last July.
As of early January of this year, the money had never made its way to the parties, and the DNC did not even have $10 million on hand. In late January, after reports surfaced of its inaction in relation to the state parties, the DNC finally announced it would begin disbursing $1 million to 11 different state parties, with grants going to Arizona, Idaho, Maine, Michigan, Minnesota, Nevada, North Carolina, Pennsylvania, Tennessee, Washington, and West Virginia.
The DCCC also paid hundreds of thousands to Clinton's "resistance" group for "generic committee list rental" between mid-December and late January.
On Dec. 12, the DCCC disbursed $286,689.34 to Onward Together for the list rentals. In January, two more payments were made to Clinton's group in the amounts of $139,242.20 and $145,882.40 for the rentals.
The DNC and DCCC did not respond to a request for comment by press time.
Clinton launched Onward Together in April of last year after saying that she intended to be a part of the "resistance" against President Donald Trump.
"From the Women's March to airports across the country where communities are welcoming immigrants and refugees to town hall meetings in every community, Americans are speaking out like never before," Clinton wrote shortly after the group's formation. "I believe more fiercely than ever that citizen engagement at every level is central to a strong and vibrant democracy."
The group was formed to send funding to other left-wing organizations that could counter Trump through direct action and protest. Throughout 2017, Onward Together sent more than $1 million to a number of progressive organizations, an employee of the group previously told the Washington Free Beacon.
Clinton also sent $800,000 from her Hillary for America, her former campaign committee, to Onward Together on May 1 of last year.
Source>http://freebeacon.com/politics/cash-strapped-dnc-dccc-pay-hillarys-resistance-group-nearly-900000-combined-list-acquisitions/
Posted by theodore miraldi at 8:26 AM