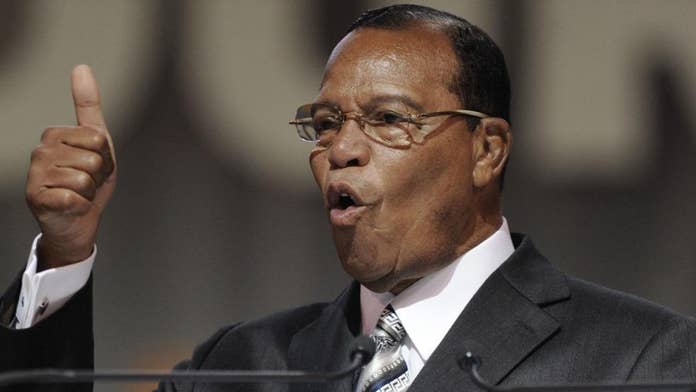 
A planned anti-Trump rally next month outside the White House is shaping up to be as much a test of African-American leaders' support for bigoted firebrand Louis Farrakhan as a denunciation of the commander-in-chief.
Organizers of the April 21 rally to “condemn the appalling bigotry and racism of the Trump administration,” say Al Sharpton, Colin Kaepernick and black members of Congress will take part. But many African-American leaders, especially those on Congress, have come under fire for not condemning Farrakhan, known for his bigoted vitriol against Jews, whites and the LGBT community.
“Condemn President Donald Trump and leave Louis Farrakhan alone,” said organizer Malik Zulu Shabazz, president of Black Lawyers for Justice. “Please do not try to stop us because we will not turn back. We will represent professionally and politically vigorously.”
Rally organizers say it is “a follow-up effort by some of the activists who helped organize…the 1995 Million Man March,” which was organized by Farrakhan and the Nation of Islam.
Shabazz said the black community must “focus on removing Donald Trump from office and establishing a government of our own.”
It is unclear which Congressional Black Caucus members will be speaking at the rally, which will be part of a multi-day National Black Men’s Convention.
Other speakers listed on the press release for the anti-Trump rally and march are: former NFL quarterback Kaepernick, New Black Panther Party Chairman Hashim Nzinga, Black Lives Matter leaders and Sharpton.
Eight caucus members, all Democrats, have been assailed by a range of critics, including liberals and conservatives, for having ties to Farrakhan, mainly in the form of meetings with him on several occasions. The lawmakers are Gregory Meeks, of New York, Danny Davis, of Illinois, Barbara Lee, from California, Andre Carson of Indiana, Maxine Waters of California, Al Green of Texas, Keith Ellison of Minnesota and James Clyborn of South Carolina.

Fox News reached out to the press secretaries of all the caucus members about whether they were going to speak at the rally or participate in any other way, but none responded.
Jewish groups, including the Anti-Defamation League and the Jewish Republican Coalition, have demanded that the Black Caucus members state where they stood on Farrakhan and his views. Ellison is deputy director of the Democratic National Committee and Clyborn is the third-highest ranking House Democrat. The coalition called on CBC members who have ties to Farrakhan to resign.
Only four of the caucus members – Meeks, Lee, Davis and Ellison – have disavowed Farrakhan's anti-Semitic and racist rhetoric. Green and Waters have been silent, ignoring repeated requests for comments by news outlets. Others have expressed intolerance for bigotry and hateful rhetoric in general, but have refused to directly speak about Farrakhan.

“They won’t repudiate a guy who hates gay people, who is anti-Semite. What he says and what he does doesn’t matter," said Tony Katz, a conservative radio host in Indiana, to Fox News in reference to the black lawmakers. "They feel the need to protect him. They never lose anything for taking this position."
In a prelude to the anti-Trump rally and march, scores of black leaders and organizations held a lobbying campaign on Capitol Hill on March 19 titled: “CONDEMN TRUMP, NOT FARRAKHAN!,” which was described by its sponsors as “a response to calls from the GOP for Democrats and Congressional Black Caucus members to officially condemn…Nation of Islam leader Minister Louis Farrakhan.”
The pro-Farrakhan activists used the day on Capitol Hill to denounce a resolution Rep. Todd Rokita, an Indiana Republican, proposed that condemns Farrakhan.
"We cannot allow a politically hypocritical political situation to exist whereas an openly racist president, Donald Trump is given a free pass and to spew racist venom and racist policies by a confederate based GOP,” Shabazz said last week, “then they have the gall to issue an official legislative condemnation of a private citizen and Black leader who is dearly beloved by the masses."
Rokita, who introduced the anti-Farrakhan resolution, said his Capitol Hill peers should not associate with Farrakhan.
"Louis Farrakhan's anti-Semitic and hateful comments are indefensible," Rokita said. "There is no question that Congress must condemn such vile hate, and my colleagues who have met with him must answer for their meetings."
Rokita’s resolution condemns Farrakhan for “promoting ideas that create animosity and anger toward Jewish Americans and the Jewish religion,” citing his Feb. 25 speech in Chicago at which he blasted “the Satanic Jew” and declared that “white folks are going down.”
The press release announcing the anti-Trump rally lists the national co-chair of the Women's March, Tamika Mallory, as a speaker. But Aquib Yacoob, a spokesman for Mallory, said she will not be speaking there.
The Nation of Islam and the March 19 lobbying campaign organizers have lashed out at caucus members who directly or indirectly have disavowed Farrakhan. Campaign organizers vowed to make sure they are not re-elected.
“We’re going to get some action. Because regardless, we’re going to get to know these Congressional Black Caucus people and they’re going to know that they are not going to bow to white people, they are going to bow to us," said Shabazz.

Louis Farrakhan's anti-Semitic and hateful comments are indefensible. There is no question that Congress must condemn such vile hate, and my colleagues who have met with him must answer for their meetings.
- Rep. Todd Rokita, Indiana Republican

He warned: “You’re going to represent us or we’re going to triple and quadruple our numbers and drive you out of here.”
In an open letter to lawmakers who disavowed Farrakhan, the Nation of Islam called them sellouts.
The new letter cited a previous one that Farrakhan in 2010 directed at “black leadership” that warned against becoming “an apologist” for Jews. Farrakhan said that siding with Jews would put black leaders at risk of being “seen by the masses of our people as a modern day Uncle Tom who believes you owe more to [Jews] than to the masses of our suffering people.
Source>http://www.foxnews.com/us/2018/03/28/farrakhan-supporters-plan-white-house-protest-in-test-mainstream-black-leaders.html
Posted by theodore miraldi at 8:07 AM