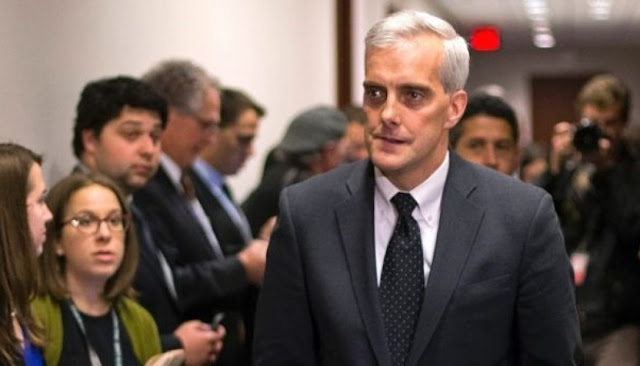 Newly uncovered text messages between FBI officials Peter Strzok and Lisa Page suggest a possible coordination between high-ranking officials at the Obama White House, CIA, FBI, Justice Department and former Senate Democratic leadership in the early stages of the investigation into alleged collusion between the Trump campaign and Russia, according to GOP congressional investigators on Wednesday.
The investigators say the information provided to Fox News “strongly” suggests coordination between former President Barack Obama’s Chief of Staff Denis McDonough, then-Senate Democratic Leader Harry Reid, and CIA Director John Brennan — which they say would “contradict” the Obama administration’s public stance about its hand in the process.
Page texted Strzok on Aug. 2, 2016, saying: “Make sure you can lawfully protect what you sign. Just thinking about congress, foia, etc. You probably know better than me.”
A text message from Strzok to Page on Aug. 3 described former FBI Deputy Director Andrew McCabe as being concerned with “information control” related to the initial investigation into the Trump campaign. According to a report from the New York Times, Brennan was sent to Capitol Hill around the same time to brief members of Congress on the possibility of election interference.
Days later, on Aug. 8, 2016, Strzok texted Page: “Internal joint cyber cd intel piece for D, scenesetter for McDonough brief, Trainor [head of FBI cyber division] directed all cyber info be pulled. I’d let Bill and Jim hammer it out first, though it would be best for D to have it before the Wed WH session.”
In the texts, “D” referred to FBI Director James Comey, and and “McDonough” referred to Chief of Staff Denis McDonough, the GOP investigators said.

FBI officials Peter Strzok and Lisa Page texted about a briefing given to former Obama Chief of Staff Denis McDonough, seen here.  (Reuters)
“We are not making conclusions. What we are saying is that the timeline is concerning enough to warrant the appointment of an independent investigator to look at whether or not the Obama White House was involved [in the Trump-Russia investigation],” a GOP congressional source told Fox News.
An FBI spokesman did not immediately respond to Fox News' request for comment.
The congressional investigators pointed out to Fox News that the CIA and FBI are supposed to be “independent agencies,” and noted that “coordination between political actors at the White House and investigators would be inappropriate,” raising questions about the level of involvement of Obama White House officials.

Former CIA Director John Brennan, seen here, briefed then-Sen. Harry Reid, D-Nev., two days before the Democratic leader wrote a letter to Comey.  (AP, File)
But weeks later, on August 25, 2016, Brennan went to Capitol Hill to brief Harry Reid — and it was unclear whether FBI officials attended the briefing, a congressional source told Fox News.
Two days after the briefing, Reid penned a letter to Comey requesting an investigation into potential collusion between the Trump campaign and Russia.
“The evidence of a direct connection between the Russian government and Donald Trump’s presidential campaign continues to mount and has led Michael Morrell, the former Acting Central Intelligence Director, to call Trump an ‘unwitting agent’ of Russia and the Kremlin,” Reid, a Nevada Democrat, wrote. “The prospect of a hostile government actively seeking to undermine our free and fair elections represents one of the gravest threats to our democracy since the Cold War and it is critical for the Federal Bureau of Investigation to use every resource available to investigate this matter thoroughly and in a timely fashion.”
Reid cited reports in his letter, noting “methods” Russia was using to influence the Trump campaign and “manipulate it as a vehicle for advancing the interests of Russian President Vladimir Putin.”
Reid added that “recent staff changes within the Trump campaign have made clear that the Trump campaign has employed a number of individuals with significant and disturbing ties to Russia and the Kremlin,” urging Comey to make the investigation “public.”
The New York Times first reported on Reid’s letter to Comey on Aug. 29, 2016.

Former Senate Democratic Leader Harry Reid, seen here, penned a letter in August 2016 to former FBI Director James Comey requesting an investigation into potential collusion with Trump campaign associates and Russia.  (AP)
The following day, Aug. 30, 2016, Strzok texted Page: “Here we go,” sending a link to the Times report titled, “Harry Reid Cites Evidence of Russian Tampering in U.S. Vote and seeks FBI inquiry.”
Strzok replied: “D [Comey] said at am brief that Reid called him and told him he would be sending a letter.”
Congressional investigators suggested that the Reid letter possibly provided “cover” for the fact that the FBI and Justice Department had already begun investigating the Trump campaign in mid-July on what they called “questionable ethical and legal grounds.”
“The ‘here we go’ text between Strzok and Page indicates the FBI/ DOJ knew the letter from Reid was coming,” a congressional source told Fox News. “This created the inference they knew it would create public calls for an investigation into Russian interference — covering them.”
The source told Fox News on Wednesday that investigators were neither “passing judgement” nor “claiming a smoking gun,” but suggested that the timeline was “incredibly concerning.”
“At some point, the amount of concerning information becomes enough for a special counsel to look into it.”
Source>http://www.foxnews.com/politics/2018/03/28/documents-suggest-possible-coordination-between-cia-fbi-obama-wh-and-dem-officials-early-in-trump-russia-probe-investigators.html
Posted by theodore miraldi at 7:57 AM