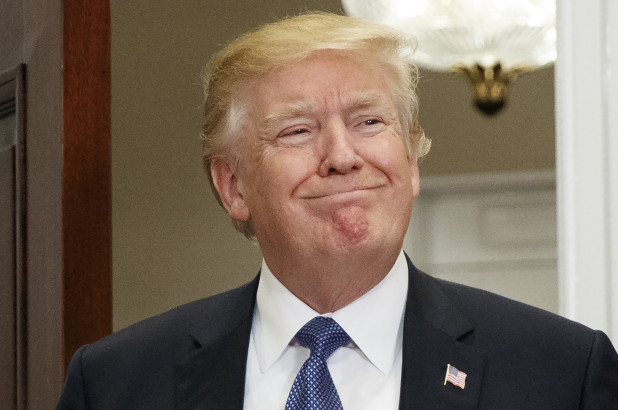 
A popular line among Washington reporters is that covering the Trump White House is like trying to drink water from a gushing fire hose. The volume overwhelms the effort.
Recent days illustrate the point and underscore the even greater difficulty of assessing the impact of Donald Trump’s presidency. So much is happening so fast that it’s impossible to make sense of what it all means for America.
Last week featured the president leading a televised discussion with bipartisan members of congress on gun legislation, his market-rattling announcement on tariffs and reports about whether Trump will agree to an interview with special counsel Robert Mueller. Those and other big-ticket items were mashed up with tweetstorms and breathless reports about who on his team is up, who’s down and who’s out.
For people outside Washington, the task of separating the wheat from the chaff is made more difficult by extreme media bias. Virtually everything Trump says and does is presented through the darkest possible lens almost everywhere.
Consider how he was accused of being too bellicose in reacting to North Korean threats to bomb the United States, then accused by some of the same people of not being bellicose enough after Vladimir Putin’s boasts about Russia’s nukes.
Then there’s CNN, which invited Bob Woodward and Carl Bernstein to compare recent events to Richard Nixon’s final days. Nothing subtle there.
From networks to newspapers, rumor and speculation are dressed up as authoritative by citing “sources close to the president.” This is compelling only if you forget how many times anonymous sources were wrong.
Of course, the fever pitch is alive on both sides of the street, with many Trump supporters still believing, as one said recently, that “he can do no wrong.”
The love vs. hate for Trump reminds me of a cynic’s view of the law of averages: If one foot is in ice water and the other is in scalding water, your feet are, on average, comfortable!
None of this is to suggest there is nothing unique about Donald Trump’s presidency. On the contrary, almost everything about it is unique.
That’s precisely why it is so difficult to be certain about the meaning of so many events. He continues to take the ship of state into uncharted waters and that alone explains much of the hair-on-fire reaction.
For example, Trump three times put on a public master class in presidential leadership. He did it with members of both parties on immigration several weeks ago, then at a meeting with governors and last week with members of congress on gun control. The president is supremely comfortable in front of the camera and those sessions allow him to talk over the heads of the Washington media and directly to people in their living rooms and offices, much as he did during the campaign.
In all three cases, Trump showed himself knowledgeable and flexible as he tried to find common ground on vexing subjects. Many ardent Democrats especially were wowed by his eagerness to accuse fellow Republicans of being afraid of the NRA.

I believe Trump was wrong on that point, and that most GOP supporters of gun rights believe the Second Amendment means what it says, and that they are representing their constituents.
Still, there is no denying that Trump broke with his party’s recent record by showing a willingness to meet Dems more than half way on gun and immigration issues.
His CEO style at those events reflects one of the initial hopes for a Trump presidency — that he could break the logjams in Washington because he is not of Washington, and is not beholden to anybody’s orthodoxy.
Yet it remains to be seen whether the approach will yield results. Can Trump bring along enough Republicans, or will he further divide the GOP?
And do Chuck Schumer and Nancy Pelosi really want to make deals on guns and immigration, or would they rather keep moving the goal posts because they want to claim in the midterms that Trump can’t govern?
All things considered, then, here is my current guide to those who want to see Trump succeed but are perplexed by events: Keep your eye on the big picture and begin each day with optimism because betting against him has been a loser.
While no president in modern history has faced such media assaults and entrenched opposition, including from some in the FBI, Trump has work horse stamina and warrior determination to succeed.
His policies are mostly the right ones and his tax changes and regulatory reforms will spur growth and create opportunities for millions of Americans.
I also believe Democrats are more divided and in a deeper hole than they want to admit. Pelosi’s absurd characterization of tax cuts and bonuses for working families as “crumbs” will not be forgotten by voters and could help the GOP hold the House.
Yet I’m not without concern.
Trump’s habit of shooting himself in the foot — why does he diminish himself by attacking Alec Baldwin? — provokes the worry that some voters who like his policies will get tired of the personal pettiness and give up on him.
I also worry that feuds with some Republicans could lead to policy defeats. And I fear that Trump’s habit of beating on his aides in public — even when he’s right, as he is about Attorney General Jeff Sessions — could cost him the services of John Kelly, his chief of staff.
While Kelly has not been mistake-free, he is the team’s MVP because he provides a stable foundation on which Trump and his administration can depend.
My conclusion: Unless Mueller produces clear evidence of wrongdoing, Trump’s policies will produce enough progress that he will finish this term strongly and have a good chance of winning again in 2020.

Count yourself lucky if you were able to watch the moving funeral of the Rev. Billy Graham. I didn’t plan on watching but when Fox offered complete coverage, I thought I would catch a few minutes. I was hooked and stayed until the tearful end.
It was a glorious event befitting “America’s pastor,” with Graham’s sister and children telling powerful stories. Taking place in a tent near his North Carolina library, it was a gospel revival all its own.

Headline: Deer semen donations are fueling Texas political campaign.
This is why they say “don’t mess with Texas.”

The decision by Mayor de Blasio’s choice for school chancellor to stay in Miami is embarrassing but could be an opportunity. The most important question is not who; it’s what.
What does the mayor want schools to achieve in his second term? So far, he has not articulated a vision that would fix a system where there is too little excellence and too much mediocrity and failure.
Without a vision for true success, no successor to incumbent Carmen Fariña will make much difference in the lives of 1.1 million students.
Source>https://nypost.com/2018/03/03/the-media-continues-to-ignore-trumps-presidential-leadership/

Posted by theodore miraldi at 1:01 PM