Trump Suggests the MILITARY Might Build the Border WALL 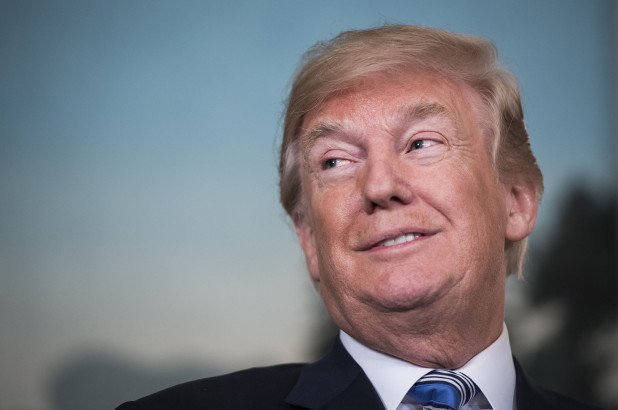 
President Trump hinted in a tweet on Sunday that the military could be tasked with building a wall on the Mexican border after a $1.3 trillion spending billfailed to include the funds he sought to erect the structure.
“Because of the $700 & $716 Billion Dollars gotten to rebuild our Military, many jobs are created and our Military is again rich,” Trump wrote in a postingabout the increase in military spending. “Building a great Border Wall, with drugs (poison) and enemy combatants pouring into our Country, is all about National Defense. Build WALL through M!”
But the 2,232-page spending plan, which Trump threatened to veto on Friday before changing his mind, came up short of providing the $25 billion the president wanted to build the wall – an oft-cited campaign pledge that also included the vow that Mexico would pay for it.
While the bill provided for $1.6 billion for wall construction, it severely limited the money to be used on shoring up parts of the existing barrier.
It also provides funds for new fencing, but prohibits a concrete barrier or construction of any of the prototypes Trump has considered.
Senate Minority Leader Chuck Schumer pointed out to Trump that the budget he signed last Friday doesn’t include money for a new wall.
“I remind the president, he did campaign on the wall, and guess who he said would pay for it? How about going to Mexico and getting them to pay for it, because this budget doesn’t allow American citizens to pay for it,” the New York Democrat said on Sunday.
Railing about the bill that passed the House and Senate last week and ended up on his desk for signature Friday, Trump declared: “I will never sign another bill like this again – I’m not going to do it again.”
Trump, who has said a wall is necessary to keep drugs and illegal immigrants from flowing over the border, suggested in his remarks that he would use the military to erect the barrier as part of a “national defense” strategy.
“I want to address the situation on border security, which I call national defense. I call it stopping drugs from pouring across our border. And I call it illegal immigration. It’s all of those things,” he said at the White House signing ceremony. “But national defense is a very important two words. Because by having a strong border system, including a wall, we are in a position, militarily, that is very advantageous. ”
Trump’s nod to military involvement is significant because among the omnibus bill’s military funding is $654.6 billion to continue the global fight against terrorism.
The president has been working with the US Army Corps of Engineers and the Department of Homeland Security to build the wall.
Additional reporting by Reuven Fenton
Source>https://nypost.com/2018/03/25/trump-suggests-the-military-might-build-the-border-wall/
Posted by theodore miraldi at 8:08 AM