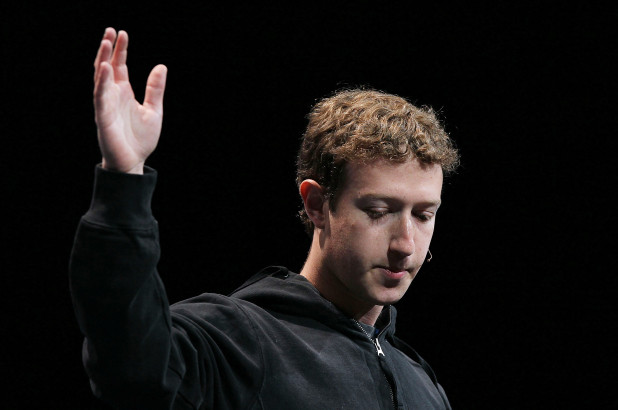 Mark Zuckerberg’s words did little to soothe anxious shareholders.
The Facebook chief executive last Wednesday finally addressed the social network’s Cambridge Analytica scandal — but his “very sorry” mea culpa couldn’t stop another sell-off in the company’s shares.
Facebook shares fell 2.7 percent on Thursday, to $164.89 — leaving them down nearly 15 percent from their 2018 high.
The 33-year-old tech mogul followed up a late afternoon Wednesday statement with an interview on CNN that night.
“I’m really sorry that this happened,” a stiff and clearly uncomfortable Zuckerberg said to CNN’s Laurie Segall, adding that he feels “really bad.”
But Zuckerberg’s apparent guilt didn’t stop him from avoiding any sort of candid answer during the interview — instead falling back to the PR talking points he had posted on his Facebook page earlier in the day.
In just about parroting the statement, Zuckerberg reiterated the moves Facebook will make moving forward and stressed that management takes the problem very seriously.
As multiple Washington lawmakers and state attorneys hone in on the scandal, Zuckerberg said he would gladly testify about Facebook’s safeguarding data — unless someone else at the Menlo Park, Calif., company is better suited to address it.
“The short answer is, I’m happy to if it’s the right thing to do,” he said, before hedging: “What we try to do is send the person at Facebook who will have the most knowledge. If that’s me, then I am happy to go.”
The founder — who has seen his personal net worth drop more than $5 billion as Facebook’s stock has plummeted — marveled at how much responsibility comes with being CEO of a social platform with over 2 billion users.
“If you told me in 2004 that a big part of my responsibility today would be to help protect the integrity of elections against interference by other governments . . . I wouldn’t have really believed that,” he said.
Zuckerberg had admitted that the incident with Cambridge Analytica — which saw the controversial data firm hoover up private info on 50 million users in an effort to tip the 2016 presidential election to Donald Trump — represented a “breach of trust” between the social network and its users.
Pivotal Research Group analyst Brian Wieser told The Post that Zuckerberg breaking his silence was a good first step — but that many more steps are needed.
“The interview [Wednesday] was a necessary thing, but barely represents the beginning of their efforts here,” he said. “This will probably get worse before it gets better for them.”
In an interview on CNBC Thursday afternoon, Facebook Chief Operating Officer Sheryl Sandberg said, too, the social network was “sorry” — but went on to deflect any blame by insisting that there will always be “bad actors” looking to game the system.
Facebook will be able to move forward without fundamentally changing anything about its ad-based business model, she said.
Source>https://nypost.com/2018/03/22/zuckerbergs-apology-was-not-enough-for-wall-street/
Posted by theodore miraldi at 7:50 AM