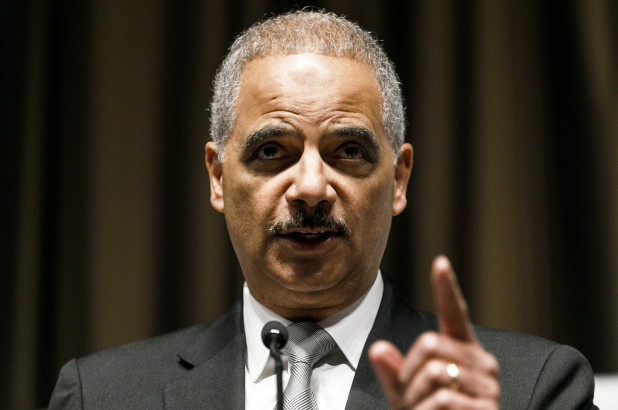 Ex-Attorney General Eric Holder will speak at the annual New Hampshire “Politics & Eggs” breakfast hosted by Saint Anselm College and the New England Council, according to a report Wednesday.
Holder said again this week that he was still considering a run for the presidency in 2020, and past speakers at the breakfast include President Trump, Hillary Clinton and presidential aspirants Sen. Ted Cruz of Texas and Ohio Gov. John Kasich, The Hill reported.
Holder said on MSNBC’s “All In with Chris Hayes” this week that he was “thinking about” a run but that he had not made a final decision.
Holder said in March he would only run if he believed he could unify the country against the Trump administration — a daunting task for former President Barack Obama’s AG, a polarizing figure frequently demonized by Republicans.
“If I were going to do it, I would do it because I would think I would have concluded that I could maybe unify the country, because it’s bigger than any one person,” Holder said then.
The Granite State holds the nation’s first presidential primary every four years, making the state important despite its small size and population.
Source>https://nypost.com/2018/04/18/another-sign-eric-holder-might-run-for-president/
Posted by theodore miraldi at 4:04 PM