Comey Says Trump is ‘Morally UNFIT to Be President’


Sad commentary of a Lawman who believes the Law applies to everyone but himself. A proven Liar, Leaker and Manipulator who turned the FBI into a Political Hit Squad for the Democrats.
...tmiraldi 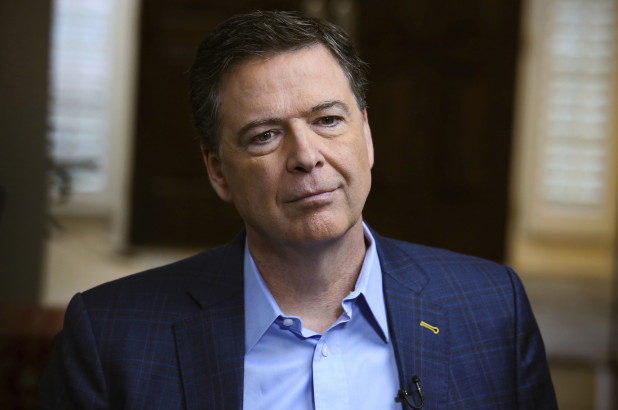 
James Comey savaged President Trump on Sunday in his first interview since being fired as FBI director — branding the president as a liar who is “morally unfit” to lead the country just hours after the chief executive ripped Comey as a “slimeball” and the “worst FBI director in history.”
Comey compared Trump’s presidency to a “forest fire” during the “20/20” interview — blasting the commander in chief for everything from his problematic legal issues to his treatment of women.
“I think he’s morally unfit to be president,” Comey said.
“A person who sees moral equivalence in Charlottesville, who talks about and treats women like they’re pieces of meat, who lies constantly about matters big and small and insists the American people believe it, that person’s not fit to be president of the United States, on moral grounds,” Comey added.
ABC’s George Stephanopoulos asked the former FBI director whether Trump was “obstructing justice” when he asked Comey to let former National Security Adviser Mike Flynn off the hook.
“It’s certainly some evidence of obstruction of justice,” Comey answered. “It would depend upon other things that reflected on his intent.”
The former fed also expressed his astonishment with Trump’s relationship with the truth.
“It reminded me of the inauguration crowd thing,” Comey said, referring to the president’s dubious statements about crowd size. “That his inauguration crowd was bigger than that Barack Obama’s first inauguration. That’s just not true. That’s not a perspective, that’s not a view, that’s just a lie.”
Comey continued: “His presidency is doing, and will do, tremendous damage to our norms and our values. But I’m an optimistic person. And so I choose to see the opportunity in a forest fire ‘cause what forest fires do is allow things to grow that never could’ve grown.”
Comey’s interview aired Sunday as he continues to promote his new book, “A Higher Loyalty: Truth, Lies and Leadership.” The show came just hours after President Trump teed off on him in a series of blistering tweets.
Earlier Sunday, Trump had preempted Comey’s interview with a series of angry tweets.
“I never asked Comey for Personal Loyalty. I hardly even knew this guy. Just another of his many lies,” Trump tweeted.
Later on, the president branded Comey as a historical failure at his job leading the FBI.
“Slippery James Comey, a man who always ends up badly and out of whack (he is not smart!), will go down as the WORST FBI Director in history, by far!” Trump wrote.
Source>https://nypost.com/2018/04/15/comey-says-its-possible-russians-compromised-trump/
Posted by theodore miraldi at 8:24 AM