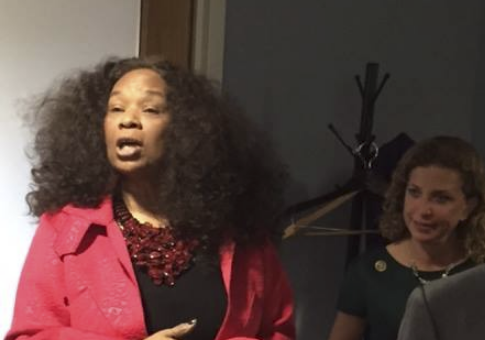 The Democratic National Committee’s Black Caucus chairwoman Virgie Rollins said Saturday that she used to be a member of the Black Panther Party.
DNC vice chairman Keith Ellison was listening and appeared to notice the Republican tracker who was secretly taping the conversation. About a minute after Rollins first mentioned the Black Panthers, Ellison seems to look directly at the tracker and began whispering with someone next to him, but before the video cut off, it captured Rollins’ comments.
"I’m a former Black Panther," Rollins said. "And when we talked about the movement, as a former Black Panther with Angela Davis and Kathleen Cleaver, it was important for us to make people understand that it was about the movement for us, educating us."
She touted the group’s community work, including teaching and helping to feed the poor. She also invoked Martin Luther King, Jr., even though the civil rights leader took issue with the Black Panthers’ movement.
"Mass incarceration did not just happen in Republican hands," she said, adding a range of other issues including police brutality and charter schools.
She told listeners that they need to help direct the party as they seek to win back Congress.
"We’ve got to be out here in masses in the midterms if we want to change this country because it’s all about changing the Congress now," she said.
"They [Democrats] cannot win without black folks and women, so it’s up to us," she added.
She said Democrats have to do more to put money toward grassroots organizers that can deliver more victories like Doug Jones’ in the Alabama Senate election.
"We’re going to do grassroots organizing in this election," Rollins closed. "That is so important."
"We’ve got to turn back to the revolution because it’s important," she said. "They depend on us."
This is not the first time Rollins has brought up her connection to the Black Panthers. In 2016, the Michigan Chronicle quoted her describing how she was "all into" the Black Panthers marching with guns when she was younger.


"There are nine girls and seven boys in my family. So we all learned how to shoot," she said. "And the Black Panthers were talking about walking down the street with a rifle? I’m getting all into this stuff! Cause you know it’s in the blood, and I’m the real McCoy."
Source>http://freebeacon.com/politics/dnc-black-caucus-chair-im-former-black-panther/?utm_source=Freedom+Mail&utm_campaign=6161c4d8e5-
Posted by theodore miraldi at 11:36 AM