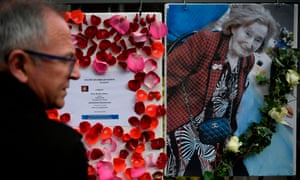 
More than 300 French dignitaries and stars, including ex-president Nicolas Sarkozy and actor Gérard Depardieu, have signed a manifesto denouncing a “new antisemitism” marked by “Islamist radicalisation”, following a string of killings of Jews.
France’s Jewish community of more than half a million is the largest in Europe but has been hit by a wave of emigration to Israel in the past two decades, partly due to the emergence of virulent antisemitism in predominantly immigrant neighbourhoods.
“We demand that the fight against this democratic failure that is antisemitism becomes a national cause before it’s too late. Before France is no longer France,” reads the manifesto, to be published in the county’s Le Figaro newspaper on Sunday.
The signatories condemn what they called a “quiet ethnic purging” driven by rising Islamist radicalism, particularly in working-class neighbourhoods. They also accuse the media of remaining silent on the matter.
“In our recent history, 11 Jews have been assassinated – and some tortured – by radical Islamists because they were Jewish,” the declaration reads.
The latest attack to rock France took place last month when two perpetrators stabbed Mireille Knoll, an 85-year-old Jewish woman, 11 times before setting her body on fire, in a crime treated as antisemitic. Her brutal death sent shockwaves through France and prompted 30,000 people to join a march in her memory.
Condemning the “dreadful” killing, the president, Emmanuel Macron, reiterated his determination to fight antisemitism.
The murders referenced in the manifesto reach as far back as 2006 and include the 2012 deadly shooting of three schoolchildren and a teacher at a Jewish schoolby Islamist gunman Mohammed Merah in the south-western city of Toulouse.
Three years later an associate of the two brothers who massacred a group of cartoonists at satirical newspaper Charlie Hebdo killed four people at a Jewish supermarket in Paris.
In April 2017 an Orthodox Jewish woman in her sixties was thrown out of the window of her Paris flat by a neighbour shouting, “Allahu Akbar” (God is greatest).
“French Jews are 25 times more at risk of being attacked than their fellow Muslim citizens,” the manifesto in Le Figaro reads.
It adds that some 50,000 Jews had been “forced to move because they were no longer in safety in certain cities and because their children could no longer go to school”.
Source>https://www.theguardian.com/world/2018/apr/22/ethnic-purging-french-stars-and-dignitaries-condemn-antisemitism
Posted by theodore miraldi at 7:20 AM