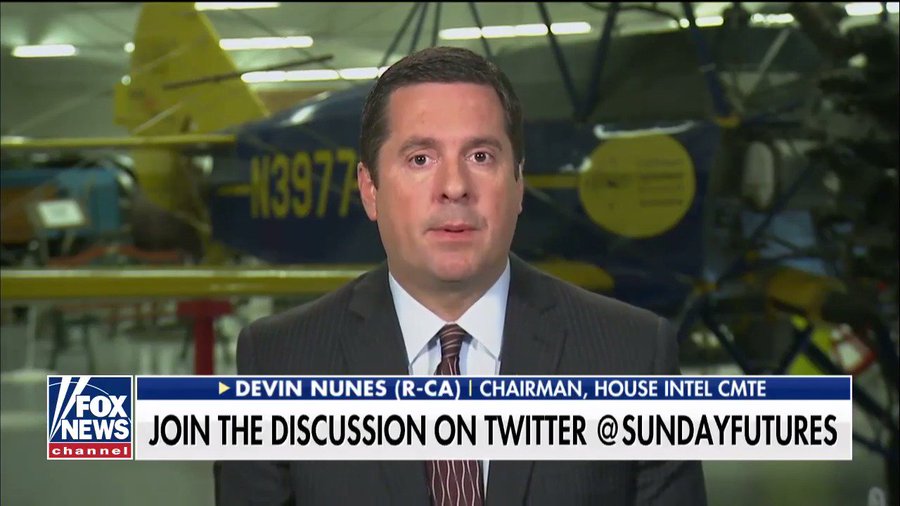 ,@DevinNunes: "We do know that longtime associates of @HillaryClinton, including Sidney Blumenthal and another person named, I think, Cody Shearer, were actively giving information to the @StateDept that was somehow making its way to the @FBI." #SundayFutures @MariaBartiromo

Nunes explained the “Five Eyes” agreement between the U.S., the U.K., Australia, Canada and New Zealand, five countries that share intelligence.
“We are not supposed to spy on each other’s citizens, and it’s worked well,” Nunes said. “And it continues to work well. And we know it’s working well because there was no intelligence that passed through the Five Eyes channels to our government. And that’s why we had to see that original communication.”
However, The New York Times reported in December that it was the Australian intelligence service that first triggered the FBI investigation. (emphasis mine)

During a night of heavy drinking at an upscale London bar in May 2016, George Papadopoulos, a young foreign policy adviser to the Trump campaign, made a startling revelation to Australia’s top diplomat in Britain: Russia had political dirt on Hillary Clinton.
About three weeks earlier, Mr. Papadopoulos had been told that Moscow had thousands of emails that would embarrass Mrs. Clinton, apparently stolen in an effort to try to damage her campaign.
Exactly how much Mr. Papadopoulos said that night at the Kensington Wine Rooms with the Australian, Alexander Downer, is unclear. But two months later, when leaked Democratic emails began appearing online, Australian officials passed the information about Mr. Papadopoulos to their American counterparts, according to four current and former American and foreign officials with direct knowledge of the Australians’ role.
The hacking and the revelation that a member of the Trump campaign may have had inside information about it were driving factors that led the F.B.I. to open an investigation in July 2016 into Russia’s attempts to disrupt the election and whether any of President Trump’s associates conspired.

The Times article, with “four current and formal American and foreign officials” cited as anonymous sources, was published just weeks after a string of stories appeared to reinforce the suspicion that the unprecedented FBI investigation into a presidential campaign was initiated by the infamous “Russian dossier” which turned out to be nothing more than unproven political opposition research paid for by the Hillary Clinton campaign.
In February, former CIA Director John Brennan was asked on NBC News’ Meet the Press if “Five Eyes” intelligence on Popodopoulos triggered the FBI investigation:

CHUCK TODD: Is the Papadopoulos thing come through the C.I.A. via the Five Eyes thing? That would have been a piece of information that gets to the F.B.I.? Is that how that works?
JOHN BRENNAN:   Now I’m not going to get into details about how it was acquired. But the F.B.I. has very close relationship with its British counterparts. And so the F.B.I. had visibility into a number of things that were going on involving some individuals who may have had some affiliation with the Trump campaign. And so the intelligence that we collected was pulsed against that. And I thought it would have been derelict if the F.B.I. did not pull the threads, investigative threads, on American persons who might have been involved with Russia and working on their behalf either wittingly or unwittingly.

So Brennan implies it was British intel and the Times said it was Australian and now Nunes says it was not from any of the “Five Eyes” countries that forced the FBI investigation.
These contradictions and Nunes‘ revelation force an inconvenient question for the FBI, the Obama Justice Department and the CIA: What really did initiate the FBI to investigate Trump’s campaign if it wasn’t official intelligence from the “Five Eyes”?
Nunes did add one other tantalizing suggestion in his back-and-forth with Bartiromo. “We know that Sidney Blumenthal and others were pushing information into the State Department. So we’re trying to piece all that together and that’s why we continue to look at the State Department,” the Intel Chairman said.


“We know a little bit about that because of what some of the State Department officials themselves have said about that,” Nunes continued. He went on to say that although his committee does not know if former Secretary of State Clinton (then Trump’s opponent for president) was “pulling the strings with the State Department and the FBI investigation. But, Nunes did confirm that Blumenthal and Cody Shearer, both long-time Clinton operatives and confidantes, were “actively” giving information to the State Department, which “was somehow making its way to the FBI.”
Source>https://www.washingtontimes.com/news/2018/apr/22/nunes-no-official-intelligence-used-start-fbi-inve/
Posted by theodore miraldi at 8:04 AM