If President Trump were my client, I would make Robert Mueller crawl over hot coals all the way to the Supreme Court and back before I would give up a single scrap of paper. 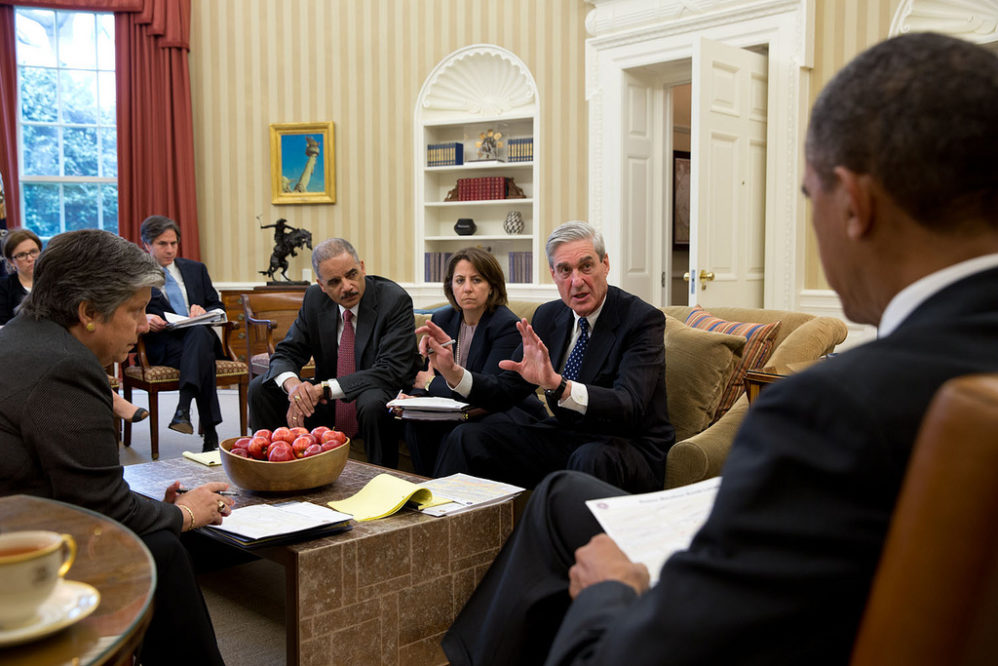 George Parry
Most of the time, practicing criminal law is pretty simple. Since the vast majority of clients are guilty as charged and lack the financial resources to pay for a trial, you cut a plea deal and do the best you can at sentencing.
But if you have an innocent client who is the target of an investigation or has already been charged, things can get complicated. How to save your client from being unjustly arrested or convicted? Should you resist and fight? Or should you cooperate with the prosecution and lay your client bare in an effort to demonstrate his innocence?
The answer to those questions depends on the prosecutor’s trustworthiness and motive. Is the prosecutor after the truth or a scalp? Whether to fight or cooperate is a function of the prosecutor’s character and agenda.
In my long experience, most prosecutors have been honest, motivated to seek the truth, and lacked any interest in charging or convicting the innocent. In those cases, I have had my clients fully cooperate with the prosecution, and the results have been most gratifying.
On the other hand, in those few instances where the prosecutor appeared to be on a mission to take down my client regardless of the law or facts, I have waged all-out war. Under such abnormal circumstances, there can be no other choice.
This is why I have been dumbfounded by President Trump’s lawyers’ approach to Special Counsel Robert Mueller’s Russian collusion investigation. To my dismay, the president’s counsel have totally cooperated with Mueller. According to media reports, they have voluntarily produced more than a million pages of documents and made administration witnesses available for interrogation. At one point, Trump’s lawyers even publicly hinted the president might voluntarily submit to an interrogation by Mueller.

All of this appears to be premised on counsels’ stated belief that the Trump campaign did not collude with Russia and that the president did not obstruct justice by firing FBI Director James Comey. Fair enough, but given the toxic, highly partisan atmosphere in Washington, Mueller’s glaring ethical shortcomings, and the Hillary Clinton sycophants who comprise his staff, it is irrelevant whether Trump is innocent.
Based on the declassified House intelligence committee Republicans’ memo and the Senate Judiciary Committee’s referral to the Justice Department of British spy Christopher Steele for possibly lying to the FBI, it appears that the hierarchies of Comey’s FBI and President Obama’s Justice Department conspired to save Clinton’s candidacy by running a fake investigation of her unsecure private email server and conducting illegal electronic surveillance of the Trump campaign. If Trump somehow managed to win the election, their backup objective was to take him down and end his presidency.
All of this raises the question of the true purpose of Mueller’s investigation. Is it an honest search for the truth or a continuation of the anti-Trump plot hatched during the campaign?
In the Philadelphia Inquirer I have time and again warned against cooperating with Mueller. If Trump were my client, I wouldn’t give the special counsel the time of day without a court order. I would make him crawl over hot coals all the way to the Supreme Court and back before I would give up a single scrap of paper. When he wanted the next scrap, I would make him do it all over again. Under no circumstances would my client voluntarily submit to questioning.

What a Hostile Prosecutor Can Do With an Interrogation

A few weeks ago, The New York Timesreported that John Dowd, who recently resigned as Trump’s lawyer, had counseled the president to refuse interrogation unless it could be shown that only Trump possessed information the prosecutors didn’t already know. Under normal circumstances, this could be a reasonable legal position.
But, since these are not normal times, I can see no reason for the president to voluntarily undergo interrogation. For even if Trump answered every question truthfully, he would be still be charged with lying. Why? Consider the following.
After he was fired, Comey illegally leaked memoranda of his conversations with Trump for the express purpose of having a special counsel appointed to investigate the president. It has been reported that, shortly thereafter, the president interviewed Mueller to fill the vacant FBI director’s position. But the day after Trump decided not to name Mueller, Deputy Attorney General Rod Rosenstein appointed him special counsel to investigate Trump.
Pause and think that one over. Through his illegal leaking, Comey laid the foundation for the appointment of a special counsel. Out of the thousands of eminently qualified and conflict-free lawyers available, Rosenstein picked Mueller, Comey’s good friend and former colleague whom Trump had just rejected, to decide whether Trump or Comey is telling the truth about their conversations. Guess who will win that contest.

If Mueller had any ethical sense, he would have declined to serve. But not only did he take the job, he proceeded to staff his operation with lawyers who have represented Hillary Clinton, the Clinton Foundation, and the IT specialist who set up Clinton’s private email server and destroyed Clinton’s Blackberrys with a hammer.
Andrew Weissmann, Mueller’s first assistant, attended Clinton’s abortive election-night victory celebration and openly praised former acting U.S. Attorney General Sally Yates for ordering Justice Department lawyers not to defend the president’s order banning travel from certain unstable countries.
Of even greater concern, Weissmann has a checkered history of wrongfully and illegally hiding exculpatory evidence and pursuing unfounded legal theories to achieve courtroom victory at all costs. What does his selection as first assistant say about Mueller’s commitment to the ethical and fair treatment of the president and others who may be targets of the investigation?
Mueller also hired the now-discredited FBI Special Agent Peter Strzok and FBI lawyer Lisa Page. After the Justice Department’s Office of Inspector General unearthed their rabid anti-Trump text messages, Mueller quietly sent them back to the FBI. He must have known of their virulent hatred of Trump when he brought them on board.
As for the rest of Team Mueller, almost without exception, they have contributed to either the Clinton campaign or other Democrat causes. In short, the operation might as well be an adjunct of the Democratic National Committee.

A Mueller Interrogation Is Only an Ambush

All of the foregoing reinforces my belief that the president has no chance of emerging unscathed and uncharged from an interrogation by Team Mueller. It would be an ambush, pure and simple. The president should absolutely refuse to voluntarily submit to interrogation.
With every passing day, as ever more disclosures of the corruption in Comey’s FBI and Obama’s Justice Department emerge, the time and tide are running out on Mueller. Soon to be released will be the inspector general’s findings, which reportedly will expose the FBI’s fake investigation of Clinton’s email server and the backup plan to sabotage Trump’s presidency should he win. With that, Mueller’s position will become even more beleaguered, and the pressure to end his safari will mount.
If Trump declined to voluntarily submit to questioning, Mueller would have to issue a subpoena to compel him to appear before the grand jury. That would afford Trump’s lawyers the perfect opportunity to move to quash the subpoena based on, among other things: Rosenstein’s illegal appointment of Mueller to conduct a counterintelligence operation with no jurisdictional limits, Team Mueller’s glaring conflicts of interest, Trump’s overwhelmingly justified firing of Comey, the legal impossibility of a president facing criminal charges for discharging a member of the executive branch, and, as appears increasingly likely, the special counsel’s furtherance of the plot hatched during the presidential campaign to destroy Trump by any means necessary.
If that happens, you should buy popcorn futures and sit back for one terrific show.
Source>http://thefederalist.com/2018/03/30/president-trump-play-hardball-robert-mueller/

Posted by theodore miraldi at 9:22 AM