Facing legal action, Deputy Attorney General Rod Rosenstein allowed House Intelligence Committee chairman Rep. Devin Nunes, R-Calif., and Rep. Trey Gowdy, R-S.C., to view the FBI memo that instigated the bureau's counterintelligence investigation of contacts between Russia and the Trump campaign, Nunes confirmed on Wednesday.
The meeting came a day after Nunes threatened to take legal action -- including contempt proceedings and impeachment -- against Rosenstein and FBI Director Christopher Wray for failing to produce a clean copy of the memo, known as an electronic communication or EC, that was responsive to an August 2017 committee subpoena.
"Although the subpoenas issued by this Committee in August 2017 remain in effect, I’d like to thank Deputy Attorney General Rosenstein for his cooperation today," Nunes responded.
When asked on Fox News' "The Ingraham Angle" Tuesday if he would hold the officials in contempt of Congress, Nunes said, "we're not going to just hold in contempt. We will have a plan to hold in contempt and to impeach ... we're not messing around here."
A government source told Fox News that Nunes, Gowdy and committee Republican staff were able to view the two-page memo with relatively few redactions. The source described those redactions as "minimal and justified." 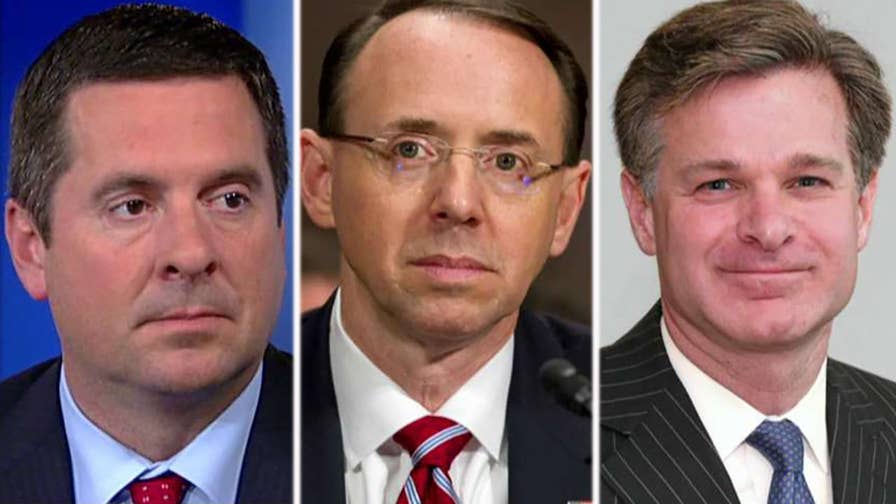 Fox News has previously reported that the memo was either drafted by or had significant input from FBI agent Peter Strzok, who was removed from special counsel Robert Mueller's probe after the discovery of anti-Trump text messages between him and another FBI official, Lisa Page.
Despite Rosenstein making the minimally redacted version of the memo available, the government source said committee Republicans remained concerned about the memo’s underlying intelligence and the credibility of the sources which would require further investigation.
A Justice Department official told Fox News that the memo's redactions had been "narrowly tailored to protect the name of a foreign country and the name of a foreign agent... These words must remain redacted after determining that revealing the words could harm the national security of the American people by undermining the trust we have with this foreign nation."
The official added that the words "appear only a limited number of times, and do no [sic] obstruct the underlying meaning of the document."
"With this production, in conjunction with the 1,000 pages of classified materials—much of which is now being provided to entire [House Intelligence] committee membership—we believe we have substantially satisfied Chairman Nunes August subpoena in an appropriate fashion," said the official. "The Department will be pleased to continue to work with the Committee on other, related requests for information."
Fox News' Jake Gibson and Samuel Chamberlain contributed to this report.
Source>http://www.foxnews.com/politics/2018/04/11/rosenstein-lets-nunes-gowdy-review-fbi-memo-that-kick-started-russia-probe.html
Posted by theodore miraldi at 7:16 AM