'Straight Out of James Bond': NEW Details in Dem IT Staffer SCANDAL 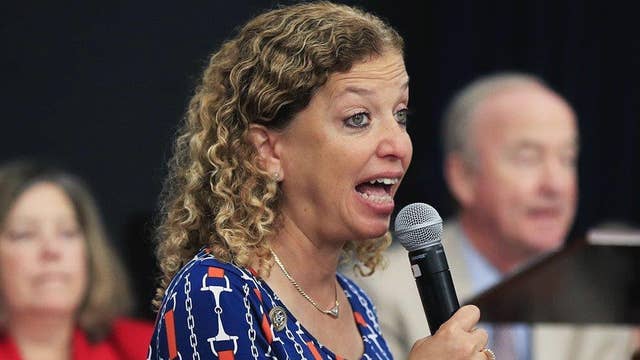 A new report could prove that President Trump was right when he tweeted about a so-called "Pakistani mystery man" who kept Democratic National Committee documents and servers out of the hands of investigators.
The report, by The Daily Caller's Luke Rosiak, says that Imran Awan -- the IT aide of former DNC chair Rep. Debbie Wasserman Schultz (D-Fla.) -- took a laptop with him in 2017 after being banned from the House computer network for “unauthorized access to data.”
The report also says that Awan left the laptop, which had the username "RepDWS," "in a phone booth with a letter to prosecutors" in April 2017.
"This is like straight out of James Bond," Rosiak said on "Fox & Friends First" Tuesday.
OPINION: The Democrats' IT scandal just got even more bizarre
Rosiak wrote:

Let that sink in. A Pakistani IT aide, who had just been fired by all his other employers for being a suspected hacker, left a laptop with the username RepDWS in a phone booth. The laptop was placed next to a letter to prosecutors. What it said is not publicly known. The cache of documents also included copies of Awan’s ID (which assured that police tied the laptop to a criminal suspect and seized it as evidence rather than returning it as lost property) and a note that said “attorney client privilege,” which put the laptop into legal limbo.

The president tweeted on Friday that the administration wants access to documents "held by the Pakistani mystery man."

Just heard the Campaign was sued by the Obstructionist Democrats. This can be good news in that we will now counter for the DNC Server that they refused to give to the FBI, the Debbie Wasserman Schultz Servers and Documents held by the Pakistani mystery man and Clinton Emails.


Awan has been enrolled in a High Intensity Supervision Program with curfew restrictions after his July 2017 arrest on charges of bank fraud.
He is awaiting trial in the case after pleading not guilty, with numerous hearings having to be postponed.
Rosiak, who has traveled to Pakistan for his reporting, said he sees the case as "everything the Russia collusion story was supposed to be."
Wasserman Schultz blamed the “right-wing media circus fringe” for drawing attention to Awan, denying any wrongdoing. She faced criticism for keeping Awan on the payroll for months, even after a criminal investigation was revealed and he was barred from the House IT network, Fox News reported last year.
Source>http://insider.foxnews.com/2018/04/24/pakistani-mystery-man-new-details-dem-it-staffer-imran-awan-debbie-wasserman-schultz
Posted by theodore miraldi at 3:06 PM