Trump has the Constitutional AUTHORITY to FIRE Mueller. Here's Why 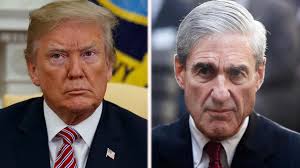 OpEd: An Election of Common VALUES, and Common SENSE