ANOTHER OBAMA BLUNDER! 'I Gave the US Trucks and Ammunition to Al Qaeda' 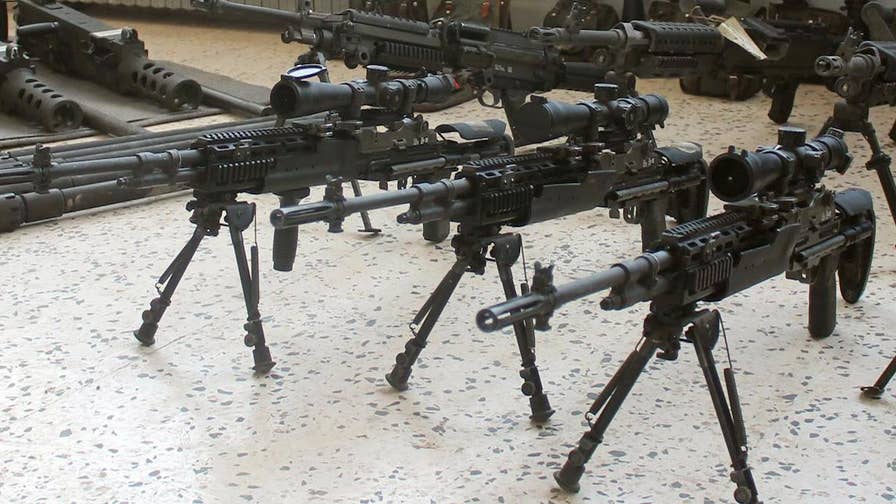 REYHANLI, Turkey –  U.S. military equipment and ammunition, sent to Syria as part of a failed Obama administration plan to find and arm moderate forces to defeat ISIS, were instead simply handed over to an Al Qaeda group, according to the man who said he himself brokered the deal.
“I communicated with Al Qaeda’s branch, Al Nusra, to protect and safely escort me and my soldiers for two hours from North Aleppo to West Aleppo,” Maj. Anas Ibrahim Obaid, better known on the battlefield as Abu Zayd, told Fox News from his home in the western Aleppo area. “In exchange, I gave them five pickup trucks and ammunition.”

Maj. Anas Ibrahim Obaid, better known on the battlefield as Commander Abu Zayd, admitted to Fox News that he gave US-issued trucks and ammunition to Al Qaeda in Syria.
Those trucks and ammo were issued to him by the United States in 2015, part of a $500 million Department of Defense effort to "train and equip" a new "ideologically moderate" force to battle ISIS. The program, one of at least two designed to funnel arms to so-called moderate Syrian rebels, proved to be a spectacular failure for the Obama administration.
Zayd, who said he defected from the Syrian Army to the opposition in 2012, described a program that was rife with inconsistencies and incompetencies.
He claimed the main prerequisite for inclusion in the program was proof of association with a group that had fought ISIS, the Islamic State. That was followed by a few basic questions, like, "With which faction did you fight?" and "What do you think about ISIS?"
After undergoing training in Turkey, the first batch of 54 trained fighters crossed back to Syria in July 2015 – only to be almost instantly ambushed by Al Nusra militants. Several of the men were kidnapped, and their U.S.-issued weapons were stolen.
Zayd said he was part of a second group to be sent into Syria -- this time without proper firepower.
The U.S. trainers "wanted us to go into Syria without weapons because of the ambush, and said we could get the weapons inside instead. This was crazy,” Zayd recalled. “We refused.”
The weapons issue was worked out, and the rebels eventually started their journey back to Syria on Sept. 19. But Turkish border guards found something else in their bags: Syrian regime flags, rather than the flags of the opposition group the fighters were being sent to support.
Zayd said fighters charged back to their base in Turkey, demanding answers. U.S trainers took responsibility for the “flag mistake,” Zayd said, and the following day the rebels continued back to Syria.

Abu Zayd's ammunition warehouse, believed to hold some American-issued items.
But morale was already a problem, Zayd said, and fighters who were being paid a $250 monthly salary by the Defense Department began defecting. His group of 72 shrank to just 25, he said.
Zayd said he, too, became quickly fed up with the program and planned to return to his hometown in western Aleppo to fight the Syrian regime.
But getting home entailed moving through Al Nusra territory. That's when he called the Al Qaeda-affiliated leaders and made the arrangement to hand over the five U.S-issued trucks and scores of ammunition, in exchange for free passage and an armed escort home.
“The Americans were so angry when they found out, they cut my salary,” Zayd said nonchalantly. “But this was our only option through their territory to get home without getting killed.”
Zayd said the Pentagon halted the troubled program about a month after his deal with Al Nusra. “I got many messages the Americans do not want to deal with me anymore. But they can’t get their weapons back,” he boasted.

Abu Zayd's weapons arsenal, in which he claims many of the arms were issued through U.S training programs.  (Fox News)
Over Skype from his living room, Zayd showed off an assortment of M-16 and M-24 sniper rifles, as well as ammo, mortar rounds and machine guns. He claimed most in his arsenal were U.S.-issued, with more in a nearby warehouse.
Sources close to Zayd told Fox News his American-funded goods routinely surface on the black market, and constitute something of a lucrative business. Zayd today remains a commander for the Free Syrian Army.
A second Obama administration program, "Timber Sycamore," was started by the CIA in late 2012 with the similar aim of arming rebels. This particular operation was active along the Turkish border to Syria's north, and a Jordanian crossing in the south, referred to as the “Southern Front.”
But Syrian opposition figures say this program was also compromised, with arms falling into the hands of ISIS or Al Nusra.
The program initially supplied light weapons. But as the Syrian civil war intensified, the U.S. strengthened its commitment by providing selected rebels with American “tune-launched, optically tracked, wire-guided” antitank missiles, better known as BGM-71 TOWs.
One opposition group backed by Washington in 2014 to use the TOWs was the FSA group Hazem Movement.
“We became optimistic we could overthrow the regime,” Asem Zidan, 27, formerly a media activist for the FSA’s Hazem, told Fox News. “And the TOW missiles helped us to prevent the regime pushing forward for some time ... but it wasn’t enough.”
Zidan said only 10 TOWs at a time were issued, which he said fell well short of what was required to defeat regime forces. And matters only worsened when Al Nusra started to attack and “steal their weapons.”
Another rebel fighter, Suheil Alhamoud, 30, who defected from the Syrian Army in March 2012 -- where he was a specialist in missiles – also expressed frustration over what he called insufficient efforts to help.

Suheil Alhamoud, now 30, was trained by the U.S and allied countries as part of the CIA's clandestine effort to arm Syrian rebels against the Assad regime in 2014.
After a string of several successful attacks against ISIS forces, Alhamoud said that in late November 2014 he received a supply of malfunctioning TOWs, believed to have come from surplus Saudi stockpiles. But despite having a stated range of more than two miles, some missiles would travel no more than 150 feet.
“I suffered a lot because of that,” Alhamoud contended. “And so the regime and the terrorists advanced. We were told more TOWs would come, but it took weeks for them to arrive.”
Alhamoud also conceded that Al Nusra managed to steal a number of TOWs, many of which have since landed on the black market, fetching up to $30,000 apiece.
EXILED AFGHAN LEADER AND ONETIME U.S. ALLY WARNS AGAINST 'PEACE' WITH TALIBAN BORN OF WEAKNESS
Ibrahim al-Jabawi, who defected from his position as vice president of Police in the Syrian province of Homs in 2012 to take on a role as the Amman-based spokesperson for the Southern Front,  concurred that “some of the TOW rockets ended up with Al Nusra.”

Ibrahim al-Jabawi, former spokesperson for the U.S-backed Southern Front Syrian opposition outfit.
In July 2017, citing its ineffectiveness and on recommendation from then-CIA director Mike Pompeo, President Trump ended the faltering Syrian rebel supply program. While the cost of the program and the amount of arms and aid provided remains mostly classified, it is estimated that more that $1 billion was spent on the effort.
The CIA declined to comment on this story. A spokesperson for the Defense Department acknowledged that they “clearly faced challenges” with the now-discontinued train-and-equip effort.