Chelsea Clinton says Trump 'DEGRADES What It Means to Be an AMERICAN,'

I guess she was never taught that Lying, Cheating on Mom in the White House, Destruction of Evidence, Causing the Death of Americans and Impeachment is NOT being a Good American. As far as the Isms, the Clintons put most if not all of them on the Front Page across the nation. An American Family of Hypocrites...tmiraldi 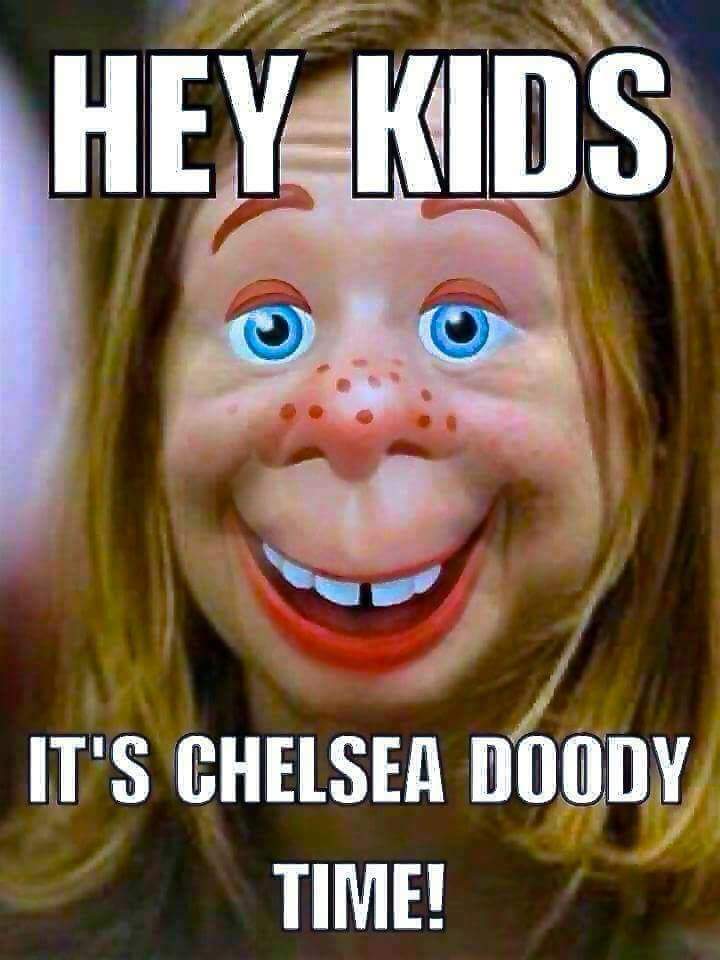 During a wide-ranging interview to promote her latest book, Chelsea Clinton said that President Trump “degrades what it means to be an American” and said she would protest his planned July visit to the U.K. if she was British.
The former first daughter, who just published "She Persisted Around the World," blamed the Trump administration for having “mainlined hate” and cited reports of a rise in hate crimes — as documented by organizations like the Southern Poverty Law Center and the FBI.
“Not just the hundreds, but now thousands of instances in schools across America, where children are citing the president as they’re demeaning a little girl, or they’re chanting ‘Build a wall’ in an attempt to demean and degrade brown children,” she told the Guardian.
Trump made building a wall at America’s southern border a cornerstone of his 2016 presidential campaign, and, despite the fact that it has become comedic fodder for late-night talk show hosts —the wall is being built.
“I think those of us who have platforms to do that have to say this is wrong and unacceptable, so we don’t normalize it but try to detoxify what has been unleashed. Because if we don’t, we leave a vacuum. And I think the darkness fills that vacuum,” she added.

Chelsea Clinton is seen with her mother, Hillary Clinton, at a campaign rally in Raleigh, North Carolina, November 8, 2016.  (Reuters)
When asked by the Guardian how British people should respond to Trump’s planned visit in July, Clinton referenced her children, saying:
“Well, I’ve been to multiple protests since the election. Charlotte’s been to at least three, maybe four. Aidan’s been to one. If I lived in Britain I would show up to protest, because I don’t agree with what he’s doing to degrade what it means to be an American.”
Of her reported friendship with Ivanka Trump, current first daughter and assistant to the president, Clinton said the two haven’t spoken “in a long time” and implied that Ivanka is fair game in terms of her advocacy for her father’s policies.
“She’s an adult. She can make the choices for herself. I mean, she’s 36. We are responsible for our choices. In 2008, I was really proud to support my mom — but I disagreed with her fundamentally on a few things, particularly her then opposition to equal marriage rights for LGBTQ Americans,” she explained. “I never defended that position, because it wasn’t what I believed was the right thing to do.”
Clinton said that liberals have been too focused on “tolerance” when it comes to different minority groups. In her view, that's not enough.
“People tolerated casual misogyny, but casual misogyny is maybe the gateway drug. We have freedom of speech, which I do think is hugely important — and yet people thought you couldn’t dispute hateful things, because they’re like — well, it’s freedom of speech. Well, freedom of speech doesn’t mean there is freedom of consequences.”
The 38-year-old, who serves as vice chair of the Clinton Foundation and has two children with her husband Mark Mezvinsky, remains focused on electing Democrats but said the country will have a long way to go to repair the damage that’s been done.
“I think the wreckage that we’re seeing at this moment is one that will, I hope, be repaired on the policy standpoint when we elect Democrats,” Clinton said. “But I think we will still then have work to do on repairing the tone in our country, the exposure of the real racist and sexist, homophobic, Islamophobic and anti-Semitic feeling which is on the rise in our country – a rot that has been exposed.”
Source>http://www.foxnews.com/politics/2018/05/27/chelsea-clinton-says-trump-degrades-what-it-means-to-be-american-says-brits-should-protest-his-uk-trip.html
Posted by theodore miraldi at 9:12 AM