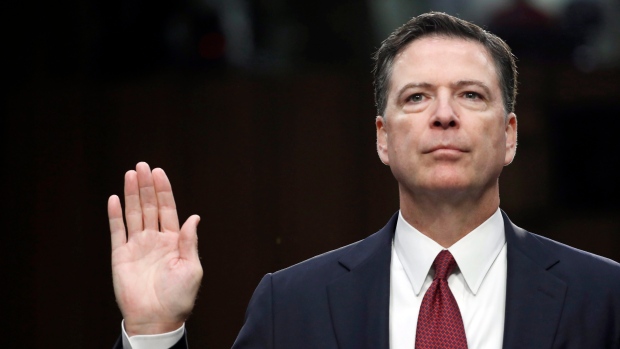 Americans know that fired FBI Director James Comey released material from his meetings with President Trump to an outsider in order to trigger a special investigation into the president.

That’s because he boasted about it in testimony to Congress.
Talking about the memos he made while FBI director of official meetings with the president, Comey said he took them and, “I asked a friend of mine to share the content of the memo with a reporter. Didn’t do it myself, for a variety of reasons. But I asked him to, because I thought that might prompt the appointment of a special counsel.”
Now emails have been uncovered that show Comey had more or less top-level access to the FBI, and special counsel Robert Mueller, even after he was fired by the president.
Officials with Judicial Watch say they’ve obtained emails from the DOJ showing that Comey was “advised” by FBI in May 2017 “to consult” with Mueller before testifying about claims of Russian meddling in the 2016 presidential election.
Mueller apparently has been investigating that issue for more than a year now, and has released no evidence of any such meddling.
“These documents show that James Comey, who was fired by the president, nevertheless had easy, friendly access to the FBI as he prepped his infamous anti-Trump testimony to the Senate,” said Judicial Watch President Tom Fitton. “This collusion led to Comey’s attacking President Trump and misusing FBI records as part of a vendetta against the president.”
The DOJ and FBI have said Comey’s leaks were unauthorized, but as yet, there has been no prosecution regarding Comey’s use of government information.
But the new emails are the first to show high-ranking FBI officials helped in Comey’s blast against Trump.
They came as a result of a Freedom of Information Act (FOIA) lawsuit against the DOJ on January 31, 2018. The lawsuit was filed after the DOJ failed to respond to an August 14, 2017 FOIA request seeking “records of communications between the FBI and Comey prior to and regarding Comey’s testimony before the Senate Select Committee on Intelligence on June 8, 2017, records of communications between the FBI and Comey relating to an upcoming book to be authored by Comey and published, and records, including but not limited to forms completed by Comey, relating to the requirement for prepublication review by the FBI of any book to be authored by Comey with the intent to be published or otherwise publicly available.”
Comey had just gotten notices to appear before Congress, including the Senate Select Committee on Intelligence, when an email chain with the subject line “Future testimony” was started.
In that, then-FBI Chief of Staff James Rybicki, then-Deputy FBI Director Andrew McCabe and Assistant Director Gregory Brower, Comey and others strategized about what Comey would say.
“In this chain, on May 18 at 6:30 pm, Comey wrote to Rybicki to confirm that he had accepted the invitation to testify before the Senate Select Committee on Intelligence (SSCI) but declined the invitations from the Senate Judiciary Committee and House Oversight and Government Affairs Committee,” the report said.
Comey, at one point, wrote, “Last, would you please tell OGC [Office of the General Counsel] that I would like to be able to review any documents authored by me or on which I am copied that will be produced to SSCI in connection with my testimony and would like the opportunity for that review before I testify?”
Another note, apparently from Comey, to Rybacki, he said, “I just got off a call with Senators Burr and Warner. They would like to have a hearing next Wednesday at which I testify, first in open session and then in closed, if necessary. I asked them not to announce it until I check with FBI/DOJ to see if you want to discuss anything before they do that. I told them I had asked for guidance on any institutional prerogatives and for the opportunity to review any documents FBI has produced that relate to me. I told them I would communicate with them by the end of the day to either ask them to hold announcing the Wednesday hearing or go ahead.”
Rybicki responded: “Director: We just met to discuss the requests outlined in the two emails below. Before responding the general counsel has asked me to confirm that you have discussed with the attorneys representing you, and that you are comfortable discussing these issues with us rather than communicating through your counsel.”
They also exchanged a draft of comments to Comey.
That resulted in recommendations that Comey’s lawyer let them know about coming testimony, and that his lawyer also consult with Mueller about the timing of that testimony.
It was in Comey’s opening statement to Congress that he told how he confronted Trump with the salacious details of a political opposition document that was paid for by Hillary Clinton’s campaign.
Only he apparently cast the document as a possibly truthful research piece.
He immediately raised claims of an effort to “compromise an incoming president.”
In the statement he said he was offering help to the president, but he then felt “compelled” to document his conversation, so he wrote up what happened from memory.
There was no evidence in his statement that he shared with the president the fact that the document was a political opposition piece assembled by those with loyalties to Hillary Clinton.
Source>http://www.wnd.com/2018/05/fired-comey-coordinated-with-fbi-on-anti-trump-testimony/
Posted by theodore miraldi at 8:19 AM