After Trump Orders DOJ to Investigate FBI’s Campaign Infiltration
You've got to Love these Rats issuing warnings trying to Bully their way to look Innocent as the Guilt becomes Evident...tmiraldi 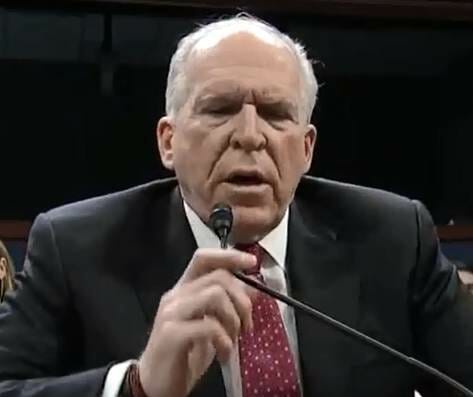 Former CIA Director-turned-Twitter troll, John Brennan lashed out at Trump on Sunday evening after the President ordered the DOJ to investigate the FBI’s infiltration of his campaign.

Brennan also fired a warning shot to House Speaker Paul Ryan and Senate Majority Leader Mitch McConnell, claiming they will ‘bear the majority of the responsibility of the harm done to our democracy’ if they don’t stop Trump.

As previously reported by TGP’s Kristinn Taylor, President Trump tweeted Sunday afternoon he is ordering the Justice Department to investigate whether the Obama administration spied on his 2016 presidential campaign.
The order comes on the heels of leaks to the New York Times and Washington Post that the Obama administration had an “informant” make several approaches to three Trump campaign officials, included one that involved an offer of cash and another an offer to “advise” the campaign.
Trump tweeted: “I hereby demand, and will do so officially tomorrow, that the Department of Justice look into whether or not the FBI/DOJ infiltrated or surveilled the Trump Campaign for Political Purposes — and if any such demands or requests were made by people within the Obama Administration!” the president tweeted.
John Brennan warned Speaker Paul Ryan and Senate Majority Leader Mitch McConnell after Trump ordered the DOJ to review the FBI’s infiltration of his campaign.
Brennan tweeted: Senator McConnell & Speaker Ryan: If Mr. Trump continues along this disastrous path, you will bear major responsibility for the harm done to our democracy. You do a great disservice to our Nation & the Republican Party if you continue to enable Mr. Trump’s self-serving actions.
Brennan also sent out a peculiar cryptic tweet earlier on Sunday that had Twitter buzzing:
John Brennan is in hot water which is why he continues to lash out at President Trump from his Twitter account.
Brennan is caught in a perjury trap over his statements about Hillary’s phony dossier in a May 2017 testimony to the intel panel.
Obama’s former CIA chief was also involved in setting up Russian espionage traps for minor players in Trump’s camp, according the investigative reporter, Paul Sperry.
On Sunday evening, the DOJ asked Inspector General to probe any alleged “impropriety or political motivation” into the FBI’s investigation into Russian
interference in the 2016 election.
Source>http://www.thegatewaypundit.com/2018/05/john-brennan-fires-warning-shot-to-paul-ryan-and-mitch-mcconnell-after-trump-orders-doj-to-investigate-fbis-campaign-infiltration/
Posted by theodore miraldi at 8:52 AM