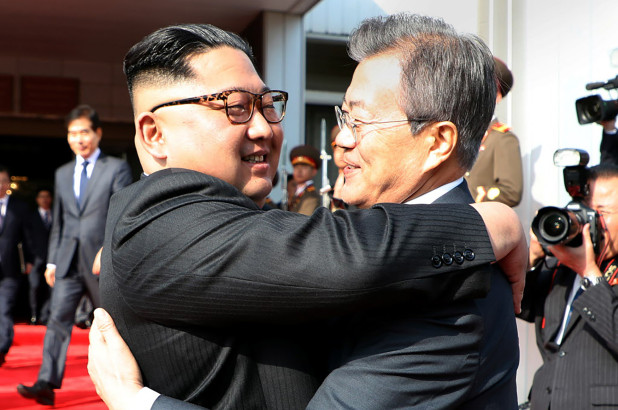 Moon Jae-in bids fairwell to Kim Jong Un as he leaves after their summit in Panmunjom, North Korea.Reuters


North and South Korea’s leaders huddled for a surprise summit Saturday to try to salvage the planned June 12 negotiations between Kim Jong Un and President Trump.
The unannounced meeting, the latest twist in the high-stakes drama surrounding the talks, came just hours after Trump tweeted that his on-again, off-again summit with the North Korean dictator might go forward, after all. On Thursday, he abruptly cancelled the meeting.
But on Saturday, South Korean President Moon Jae-in crossed the border and met Kim on the North Korean side of the village of Panmunjom, where they talked for two hours about “making the North Korea-U.S. summit a successful one,” according to Moon’s spokesman.
The confab in the Demilitarized Zone came just a month after the two held the first inter-Korean summit in more than a decade, where they pledged to denuclearize the Korean peninsula.
Trump roiled plans for the June 12 US-North Korea meeting Thursday with a letter that decried Kim’s “tremendous anger and open hostility.” The North had issued a vicious official statement labeling Vice President Mike Pence a “political dummy,” and US officials said Kim’s negotiators had blown off a planning meeting in the previous days.
Another swerve came late Friday. “Very good news to receive the warm and productive statement from North Korea,” Trump tweeted. “We will soon see where it will lead, hopefully to long and enduring prosperity and peace. Only time (and talent) will tell!”
Source>https://nypost.com/2018/05/26/north-south-korea-meet-to-discuss-kims-summit-with-trump/