Fired FBI Deputy Director Andrew McCabe wrote a secret memo on circumstances leading up to the firing of his former boss James Comey.
A person familiar with the situation told the Associated Press on Wednesday that the previously unknown document was turned over to special counsel Robert Mueller.
Mueller and his team are investigating whether the Trump campaign coordinated with Russia during the 2016 presidential election and if the president’s decision to fire Comey last May was an attempt to obstruct the investigation.
The memo reportedly recalls a conversation McCabe had with Deputy Attorney General Rod Rosenstein about his preparation for Comey’s firing. 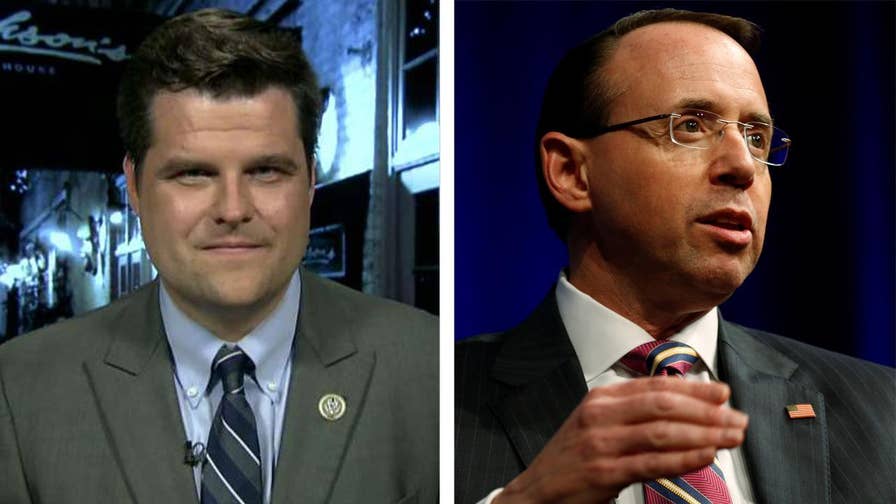 Rosenstein, who’s currently facing calls to resign from members of the U.S. Congress amid his reluctance to comply with U.S. House oversight, played a role in the downfall of Comey as he penned a memo that criticized Comey for his handling of the Hillary Clinton email investigation that the White House used to justify the firing.
ROSENSTEIN FIGHTS HOUSE GOP IMPEACHEMENT PUSH, SAYS DOJ ‘IS NOT GOING TO BE EXTORTED’
The memo by McCabe reportedly claims Rosenstein suggested to him that he was initially asked to reference the Russia investigation in the memo about Comey. The final memo by the deputy attorney general didn’t mention Russia and instead focused on the Clinton email case.
Rosenstein appointed Mueller just a week after Comey was fired from his role. The job fell to Rosenstein because Attorney General Jeff Sessions had recused himself from the case because of his advisory role in Trump's campaign.
McCabe is known to have kept personal notes on his interactions with Trump, some of which included what Comey told him about his encounters with the president, Fox Newsreported. He turned over the memos to Mueller.
Trump criticized the documents, saying in March that he never saw McCabe take notes about their conversations, suggesting the memos should be called “fake memos.”
“Spent very little time with Andrew McCabe, but he never took notes when he was with me. I don’t believe he made memos except to help his own agenda, probably at a later date. Same with lying James Comey. Can we call them Fake Memos?” Trump tweeted.

Spent very little time with Andrew McCabe, but he never took notes when he was with me. I don’t believe he made memos except to help his own agenda, probably at a later date. Same with lying James Comey. Can we call them Fake Memos?

Twitter Ads info and privacy
McCabe was fired in March, just days before he would have been eligible for a lifetime pension, amid a report by an inspector general, claiming he misled internal investigators reviewing the bureau’s probe of Clinton’s email server and leaked a self-serving story to the media.
Sessions, who authorized the McCabe firing, said at the time that McCabe “made an unauthorized disclosure to the news media and lacked candor − including under oath − on multiple occasions.”
DOJ IG RELEASES EXPLOSIVE REPORT THAT LED TO FIRING OF EX-FBI DEPUTY DIRECTOR ANDREW MCCABE
Inspector General Michael Horowitz, who also penned the damning report, determined that McCabe authorized the leak yet later told the investigators that he did authorize the disclosure and did not know who was responsible.
“[W]e concluded that McCabe’s decision to confirm the existence of the CF investigation through an anonymously sourced quote, recounting the content of a phone call with a senior department official in a manner designed to advance his personal interests at the expense of department leadership, was clearly not within the public interest exception," the report said.
Fox News’ Adam Shaw, Brooke Singman and the Associated Press contributed to this report.
Source>http://www.foxnews.com/politics/2018/05/31/secret-mccabe-memo-in-muellers-hands-gives-details-comeys-firing-report.html
Posted by theodore miraldi at 7:34 AM