Shaming teen for wearing ‘racist’ dress to prom is crazy -- Where does nonsense of cultural appropriation end? 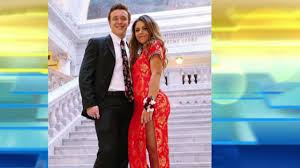 Keziah Daum, an 18-year-old high school student in Woods Cross, Utah, has found herself on the receiving end of vicious and scathing abuse on social media for shocking act of … daring to wear a traditional Chinese dress to a prom.
Say what?
Keziah is not Asian. So she is guilty, in the minds of those mindless cowards of the keyboard, of a newly developed left-wing cardinal sin called “cultural appropriation.”
As of Tuesday afternoon, Keziah’s tweet showing her wearing the red and yellow dress had been retweeted more than 6,000 times and liked more than 94,000 times.
Keziah is not apologizing. Her tweet said she wore the dress to show respect for Chinese culture.
But a nasty tweet from a young Asian-American man responding to Keziah, saying: “My culture is NOT your g------ prom dress” has been retweeted more than 41,000 times and liked more than 178,000 times.
If you’ve never heard of cultural appropriation, consider yourself lucky – it means you aren’t surrounded by politically correct pinheads who are only happy when they consider themselves offended (or “alienated,” in their own language) by something, somewhere.
The term cultural appropriation is borrowed from sociology – itself a dubious academic discipline to begin with. The term means that people from a majority culture are borrowing aspects of minority culture without the permission of those minority members.
But there’s another way to express the concept of cultural appropriation – it’s called human nature. It’s only natural for people to appreciate the contributions of other groups – ethnic, religious, racial, or whatever – and to adapt those ideas or appearances for themselves.
It’s been going on for millennia.
These days, the McCarthyites of the left are demanding that no one ever use anyone else’s appearance, culture, clothing, music, or anything else, without the express written permission of the group from which that item or idea comes.
What a relief that cultural appropriation wasn’t a “thing” in the late 18th century, when Britain, France and Germany went gaga for Chinese porcelain, creating massive wealth for Asian artisans who sent millions of pieces of china to Europe and created huge domestic industries for china in those nations.
I sure hope none of the Cultural Appropriation Fan Club use china in their homes … because if they are, they’re guilty of cultural appropriation themselves!
In 1837, the great French composer Hector Berlioz based the Dies Irae movement of his great Requiem on a line of Gregorian chant, which had been composed almost 800 years earlier. Should we put Berlioz on a new “index” of forbidden cultural items, because he dared borrow from a religious order of which he was not a part?
Should we slash all the Paul Gauguin canvases across the world’s museums, because he painted women from Tahiti?
Pablo Picasso developed a fascination with African masks, which led to African art becoming known and admired in Europe in the first half of the 20th century.
Bad Picasso! Bad Picasso!
Should non-Latinos never be allowed into Mexican restaurants?  Should non-Asians be barred from Chinese restaurants? Should white people not be permitted to listen to jazz, or Asians be barred from listening to the Beatles? Should leftists whose first language isn’t Latin be allowed to use words derived from Latin … of which “cultural” and “appropriation” are just two?
Oh, and by the way, back to the subject of clothing: about 33 percent of all clothes and 72 percent of all shoes, boots and other footwear sold in the U.S. are made in China. And more than 97 percent of the clothes and 98 percent of the shoes and other footwear sold in the U.S. are made in other countries.
Getting rid of all those items in our closets could give new meaning to phrase “I have nothing to wear.” Not to mention terminating employment for people around the world making our clothes and shoes.
Where does the nonsense of cultural appropriation end?
How about right here, right now?
America is supposed to be an appreciation of cultural mores – whether we’re a melting pot or a salad bowl, we’re a society that honors contributions from immigrants and visitors from all over the globe.
The left wants us to step backwards into a world where we are suspicious of one another and not allowed to get to know each other or what we think about or stand for. That’s the exact opposite of what’s needed today, when there is little positive communication across the barricades that seem to have been erected in society.
Cultural appropriation really means cultural Balkanization, a world where we are afraid to admire the works and contributions of people who are different from ourselves.
Combine that concept with a system of social media that allows for the condemning of those who dare to cross the line – a line they may never even have heard of.
What happened Keziah on Twitter is a public shaming far worse than the 17th century witch hunts, because the shunning doesn’t stop at the edge of one’s neighborhood. Every disparaging tweet or post travels internationally and becomes a part of that person’s permanent, indelible online record. That’s the real shame.
The proponents of cultural appropriation didn’t likely intend for their clever little idea to be picked up by haters across the planet and used as a means of humiliating people they never met … in this case, a young woman who merely committed the outrageous crime of wearing a dress to her prom. Or maybe they’re thrilled by all this.
I’ll tell you the real reason Keziah has come in for such vitriol:  it’s because  she’s a beautiful young woman, judging by the photographs, and she looks terrific in her Chinese dress.
I think all those haters out there are just jealous.
Source>http://www.foxnews.com/opinion/2018/05/01/shaming-teen-for-wearing-racist-dress-to-prom-is-crazy-where-does-nonsense-cultural-appropriation-end.html
Posted by theodore miraldi at 8:06 AM