Trump is Putting the US Back on TOP 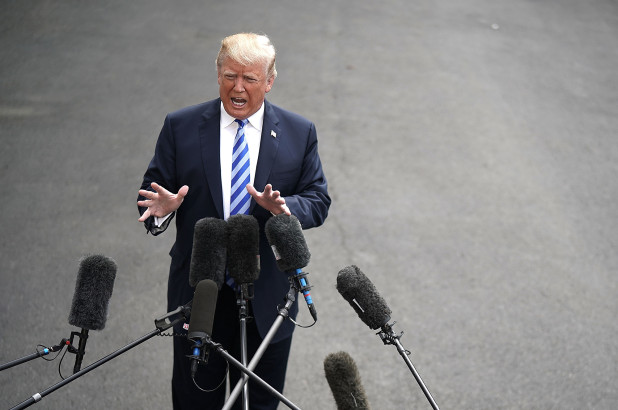 During a recent dinner, a liberal friend gave me a shock. “I didn’t vote for Trump,” she said, “but I have to admit I like that our country is on top again. I’m proud that we’re the most powerful country and that others respect our power.”
Hear, hear, I’ll drink to that.
It’s premature to declare the death of the foolish idea that America is in permanent decline and must accept a lower rung on the global ladder. But as my friend astutely observed, it is already clear that American Exceptionalism is making a comeback, and you don’t have to support President Trump to appreciate the benefits of his policies.
No rational American can oppose North Korea’s tentative promise to give up its nuclear weapons. Almost as important is the fact that Trump’s threat to withdraw from the Iran deal is leading Europe, especially France, to concede that the deal is flawed and must be toughened.
Then there’s the ground-breaking agreement of Arab countries to work with America — and Israel — to curb Iran’s aggressions. There also are signs that China, Japan and South Korea are willing to revise their trade deals with the United States.
These changes are still in the early innings and could collapse in a pile of false hopes. But the fact that they are on the table and moving forward marks a dramatic turnaround from the recent certainty that the post-World War II order America had fashioned and policed was kaput.
Recall that it was fashionable to conclude the United States had reached its zenith of power relative to the rest of the world and the future was all downhill.
For many of us, American Exceptionalism never went out of fashion. But its light dimmed during the Obama administration, when the president reshuffled our alliances and voluntarily put constraints on America’s freedom to act, with the Iran deal and the Paris climate accords prime examples.
Obama’s rhetoric and policies reflected a desire to accept decline and manage it rather than reverse it.
From the shrinking of the military to his apology tours to a preference for ceding power to multinational organizations, he accommodated rivals and even sworn enemies under the guise of progress.
Similar thinking dominated economic policies as well, with many economists rationalizing slow growth as the “new normal” and predicting that stagnation was here to stay.
The theme that our slide was inevitable and perhaps desirable in some respects was captured in a 2008 Fareed Zakaria book called “The Post-American World.” There and elsewhere, the argument was that the rising power of other nations and cultures would curtail America’s ability to shape events.
If we were smart, the theory went, we would limit our resistance to existential threats and otherwise work in harmony to boost the up-and-comers. Many of these so-called declinists wanted America to shrink its military even further and use the savings to fund social welfare programs like those in Europe.
Trump’s election — under the America First banner no less — provided the first jolt to the Obama-Zakaria world view. A second jolt must be how relatively fast big changes are coming, and how arguing against them could be politically perilous for Democrats.
Few active Dems, for example, raced to defend Susan Rice, Obama’s former national security adviser, when she urged Trump to live with North Korea as a nuclear power. She argued for a containment strategy like the one we had with the Soviet Union.
That amounted to a counsel of surrender, and Trump thankfully ran the other way. But it’s not as if Trump is guilty of shooting first and speaking second.
Although the president clearly likes to talk tough and rattle sabres, he has shown restraint when it comes to action.
Instead, whether by design or simple personal preference, Trump is following the Roman admonition that, “If you want peace, prepare for war.” He is in the process of rebuilding the military and building coalitions against North Korea and radical Islam.
His sanctions against Russia are tougher than those of the two previous presidents, despite the fact that Vladimir Putin carved up Georgia under George W. Bush and stole Crimea from Ukraine under Obama without paying much of a price.
North Korea, of course, remains the ultimate test case of Trump’s approach and the key to success elsewhere. His planned summit with Kim Jong-un is a first for an American president, and his pledge to walk out if the meeting is fruitless reflects a determination not to be taken for a fool.
At the same time, by pressuring China to pressure North Korea, and seeming to link the outcome to China trade negotiations, Trump is playing a unique card that he created with his threats of tariffs.
Again, all this may come to nothing, or the worst case scenarios may materialize.
But the potential upside is enormous: an historic accord to rid the Korean peninsula of nukes without a shot being fired. And if a Nobel Peace Prize followed, well, just imagine the sound of exploding heads among the declinists.
That would be exceptionally sweet.
Source>https://nypost.com/2018/05/05/trump-is-putting-the-us-back-on-top/
Posted by theodore miraldi at 8:33 AM