Why Is The FBI OUTING Stefan Halper As Their INFORMANT In The Trump Campaign?


This is just insane.
The FBI and Department of Justice has been fighting tooth and nail to not tell Congress the identity of the informant they used to gather intelligence on the Trump campaign. And their allies in Congress and elsewhere have chimed in with all manner of ridiculous and bullsh** threats directed at Devin Nunes…though not at Trey Gowdy who is working with Nunes to identify this FBI source. A reflexively leftwing law professor (but I repeat myself) made this astonishing statement tonight:
View image on Twitter 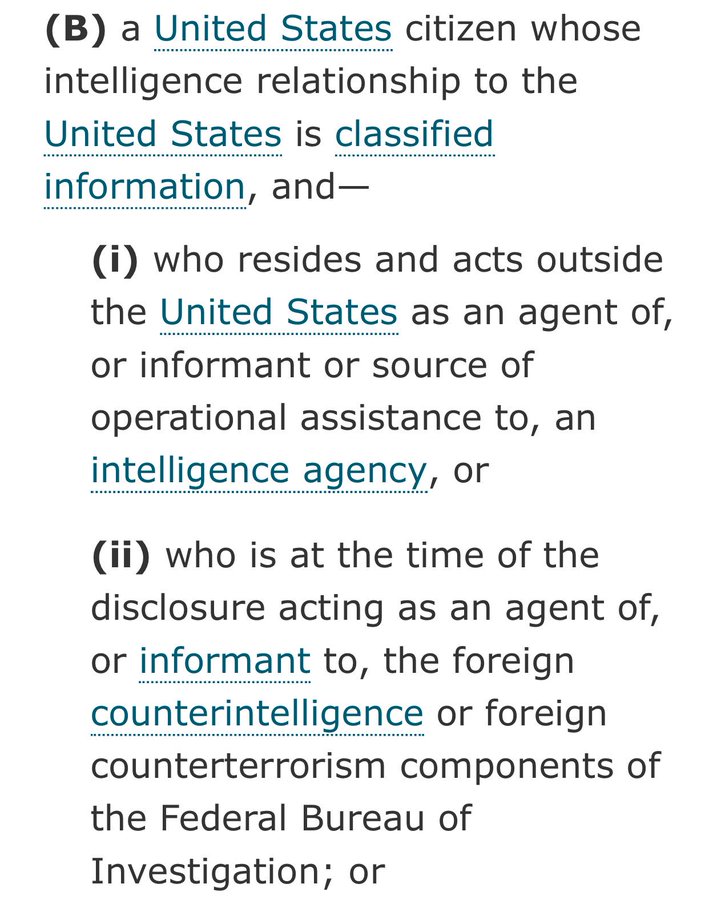 Just a friendly note to remind you that leaking the identity of an FBI informant in the context of a foreign counterintelligence investigation is a felony in violation of the Intelligence Identities Protection Act of 1982:https://www.law.cornell.edu/uscode/text/50/3126 …

Twitter Ads info and privacy
This is just stupid. The law clearly defines who it covers as employees of an intelligence agency. This does not cover informants or sources and intelligence agencies are forbidden by law from collecting information on US persons. And the very idea that the Department of Justice is going to okay a grand jury investigation and indictment of a member of Congress when the FBI has leaked the same information to multiple media outlets is simply insane.
The ranking member of the Senate Intelligence Committee made a similar threat today:

The top Democrat on the Senate Intelligence Committee warned Friday that his colleagues could be committing a crime if they obtain the identity of a secret FBI source and use it to undermine the ongoing investigation into Russian interference in the 2016 election.
Sen. Mark Warner (D-Va.) raised the alarm in a Friday evening statement, as Republican allies of President Donald Trump have pressed the Justice Department for details about a source believed to have aided the FBI and Special Counsel Robert Mueller’s probe into Trump campaign contacts with Russians.
“It would be at best irresponsible, and at worst potentially illegal, for members of Congress to use their positions to learn the identity of an FBI source for the purpose of undermining the ongoing investigation into Russian interference in our election,” Warner said. “Anyone who is entrusted with our nation’s highest secrets should act with the gravity and seriousness of purpose that knowledge deserves.”

If Warner were truly concerned about irresponsible or illegal he’s be worried about the FBI and Justice because they have effectively outed their informant. Last week, there was speculation that the informant was a US academic teaching at Cambridge named Stefan Halper. He had a connection to US intelligence. He had a friendship with a retired head of MI6. He contacted George Papadopoulos out of the blue and paid for his flight to London in addition to several thousand dollars for a “research paper.” Papadopoulos broke off contact with Halper started asking about Clinton emails. Halper struck up a friendship with Carter Page.

Today, the FBI and Justice go back the the leak well and give us enough information that we can say pretty conclusively that Halper is the man.
Secret FBI source for Russia investigation met with three Trump advisers during campaign.

In mid-July 2016, a retired American professor approached an adviser to Donald Trump’s presidential campaign at a symposium about the White House race held at a British university.
The professor took the opportunity to strike up a conversation with Carter Page, whom Trump had named a few months earlier as a foreign policy adviser.…The Washington Post — after speaking with people familiar with his role — has confirmed the identity of the FBI source who assisted the investigation, but is not reporting his name following warnings from U.S. intelligence officials that exposing him could endanger him or his contacts.…Page recalled his conversation with the professor as pleasant, if not particularly memorable. It was the first interaction they ever had, he said.…Page and the FBI informant stayed in touch after the conference, meeting several times in the Washington area, Page said. Page said he did not recall exactly what the two men discussed.…People familiar with his outreach to Papadopoulos said it was done as part of the FBI’s investigation. The young foreign-policy adviser had been on the radar of the FBI since the summer, and inside the campaign had been pushing Trump and his aides to meet with Russian officials.
[Trump campaign emails show aide’s repeated efforts to set up Russia meetings]
“Please pardon my sudden intrusion just before the Labor Day weekend,” the professor wrote to Papadopoulos in a message described to The Post.
He said he was leading a project examining relations between Turkey and the European Union. He offered to pay Papadopoulos $3,000 to write a paper about the oil fields off the coast of Turkey, Israel and Cyprus, “a topic on which you are a recognized expert.”

Here the FBI claims that they are trying to protect this guy’s identity but they give it to the Washington Post who then calls people to ask them about their contacts with the source.
And apparently Trump’s tweet today on the subject acted like catnip for the New York Ties because this

Donald J. Trump ✔@realDonaldTrump
Reports are there was indeed at least one FBI representative implanted, for political purposes, into my campaign for president. It took place very early on, and long before the phony Russia Hoax became a “hot” Fake News story. If true - all time biggest political scandal!

Twitter Ads info and privacy
yielded this:
F.B.I. Used Informant to Investigate Russia Ties to Campaign, Not to Spy, as Trump Claims.

Law enforcement officials have refused, saying that handing over the documents would imperil both the source’s anonymity and safety. The New York Times has learned the source’s identity but typically does not name informants to preserve their safety.…The informant is well known in Washington circles, having served in previous Republican administrations and as a source of information for the C.I.A. in past years, according to one person familiar with the source’s work.
F.B.I. agents were seeking more details about what Mr. Papadopoulos knew about the hacked Democratic emails, and one month after their Russia investigation began, Mr. Papadopoulos received a curious message. The academic inquired about his interest in writing a research paper on a disputed gas field in the eastern Mediterranean Sea, a subject of Mr. Papadopoulos’s expertise.
The informant offered a $3,000 honorarium for the paper and a paid trip to London, where the two could meet and discuss the research project.
“I understand that this is rather sudden but thought that given your expertise it might be of interest to you,” the informant wrote in a message to Mr. Papadopoulos, sent on Sept. 2, 2016.…Mr. Page, a Navy veteran, served briefly as an adviser to Mr. Trump’s campaign until September 2016. He said that he first encountered the informant during a conference in mid-July of 2016 and that they stayed in touch. The two later met several times in the Washington area. Mr. Page said their interactions were benign.
The two last exchanged emails in September 2017, about a month before a secret warrant to surveil Mr. Page expired after being repeatedly renewed by a federal judge. Mr. Trump’s congressional allies have also assailed the surveillance, accusing law enforcement officials, with little evidence, of abusing their authority and spying on the Trump campaign.
The informant also had contacts with Mr. Flynn, the retired Army general who was Mr. Trump’s first national security adviser. The two met in February 2014, when Mr. Flynn was running the Defense Intelligence Agency and attended the Cambridge Intelligence Seminar, an academic forum for former spies and researchers that meets a few times a year.

The identity of the informant could not be more clear. And the identification didn’t come from a leak by Congress, it came from multiple leaks by the FBI and DOJ who are burning Halper to the ground for their own reasons And I think those reasons will be come abundantly clear as the DOJ IG finishes up his investigations.
Source>https://www.redstate.com/streiff/2018/05/18/fbi-outing-stefan-halper-informant-trump-campaign/?utm_source=rsmorningbriefing&utm_medium=email&utm_campaign=nl
Posted by theodore miraldi at 2:41 PM