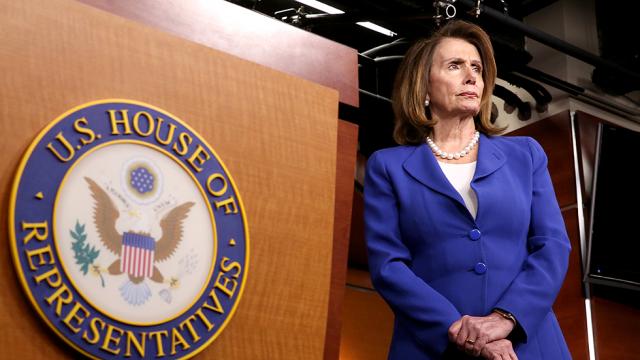 House Minority Leader Nancy Pelosi (Calif.) and other top Democrats are vowing to abide by fiscally hawkish pay-as-you-go rules if they seize the majority next year, rejecting calls from liberals who feel they’d be an impediment to big legislative gains.
Pelosi, who adopted “pay-go” rules when she held the Speaker’s gavel more than a decade ago, says she’ll push to do it again if the Democrats win the House in November’s midterm elections.
“Democrats are committed to pay-as-you-go,” Pelosi spokesman Drew Hammill said Tuesday, affirming the policy would be a 2019 priority.
Rep. Steny Hoyer (D-Md.), the minority whip, is also endorsing the notion that a Democratic majority should adopt the budget-neutral rules next year.

“The pay-go rule is a good rule and we ought to reinstitute it,” Hoyer told The Hill last week.
Yet the idea is already prompting howls from some liberals in the caucus, who want to pursue an ambitious legislative agenda next year — including costly, big-ticket items such as expanding health-care access, subsidizing education opportunities and boosting infrastructure projects — and fear pay-go might be too confining.
Rep. Raúl Grijalva (D-Ariz.), who heads the Congressional Progressive Caucus (CPC), said the Democrats would be foolish to adopt the fiscal restraints, especially in light of the Republicans’ newly adopted tax-reform law, which is estimated to add almost $2 trillion to the debt over the next decade.
“The pay-go thing is an absurd idea now given the times and given what’s already been done to curry favor with corporate America,” Grijalva said.
Politically, Republicans will surely bash the Democrats if they pursue expensive government programs without offsets. But the GOP under President Trump has lost the fiscal high ground, having busted budgets themselves, particularly with the enactment of their tax-reform law. The Congressional Budget Office predicts the annual deficit will top $1 trillion by 2020.
Grijalva noted that the revenue losses created by the tax law are already squeezing federal programs favored by Democrats. Adopting pay-go rules on top of that, he argued, would only pinch them further.
“It would be, I think, irresponsible to try to tie up Congress’s ability to respond to economic downturns or, in the current discussion, to slash programs,” he said. “We’re going down a path that I think helped cause the Great Recession.”
If Democratic leaders are looking to adopt budget rules, he said, “How about requiring full audits of programs, including the Department of Defense?”
The liberal position could create a headache for Pelosi and other party leaders, who have hammered the Republicans for being reckless with the budget and want to portray themselves as the more fiscally responsible party. Republicans had bashed former President Obama and the Democrats for rising deficits amid the recession — a message that helped the GOP win the House in a 2010 wave — and Democrats are hoping to turn the tides this year.
“We all have responsibility for reducing the debt for our children,” Pelosi said last month at a forum hosted by the Peter G. Peterson Foundation, which advocates for reducing the national debt.
“Democrats believe that you must pay as you go. Whatever you want to invest in, you must offset.”
The Democrats have a long history of supporting pay-go, which was first adopted as a platform item at their 1982 convention. In 2007, after Democrats took control of the House, they adopted a pay-go rule, which governed legislation moving through the lower chamber while Pelosi held the Speaker’s gavel. Two years later, with more Democrats in the Senate and President Obama in the White House, the Democrats went even further, enacting a statutory pay-go rule applying to both chambers.
The Republican critics of the strategy argue that pay-go, by the Democrats’ design, is too weak to be effective, since it hasn’t applied to some of the biggest federal cost drivers, including Social Security. The critics also maintain that Democratic leaders have too easily evaded the pay-go guideline by simply passing a rule to waive it. The rules also haven’t applied to emergency spending bills, such as responses to natural disasters.
Rep. Barbara Lee (D-Calif.), a CPC member who ranks among the most liberal lawmakers on Capitol Hill, said Democrats can push an ambitious legislative agenda while also finding the revenue to pick up the tab without piling onto deficits.
“This government has the resources to make sure that everyone has an opportunity to move into the middle class,” Lee said. “It’s the priorities and who we believe should have access to the American dream is the question.”
Source>http://thehill.com/homenews/house/390898-dem-leaders-embrace-pay-go
Posted by theodore miraldi at 10:13 AM