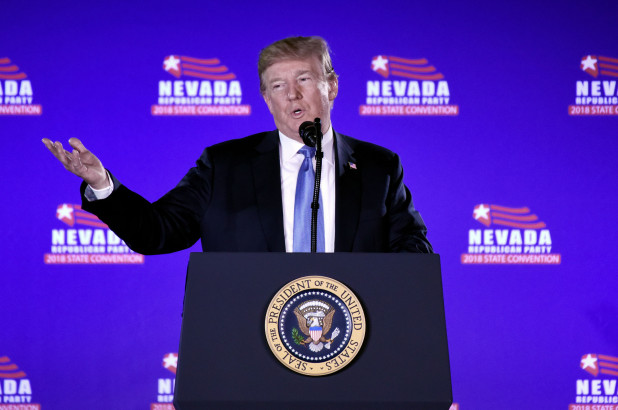 
In politics, as in life, lucky is the person with clumsy and incompetent enemies. By that measure, President Trump is the luckiest man on Earth.
As illustrated by the growing proof of FBI bias against him and the left’s incoherent rage over his immigration policies, Trump’s political enemies these days resemble the passenger list on a ship of fools.
Consider the expanding revelations of FBI misconduct during the 2016 campaign, especially the text where top agent Peter Strzok vows that “we’ll stop” Trump from becoming president.
Strzok was dumb to make the promise — and doubly dumb for making it to his FBI lover on a government-owned phone. Inspector Clouseau reporting for duty!
Not so long ago, Trump’s claims that Barack Obama’s administration tried to rig the election were widely ridiculed. Now those claims look to be spot on, and added revelations are certain as probes continue into former FBI boss James Comey and others.
Then there is the left’s reaction to the president’s fumble on separating families at the border. Democrats and their media handmaidens declared war with little to say except that Trump is worse than Hitler and all immigrants, legal or not, deserve a welcome wagon.
Those are not winning arguments outside hate-Trump progressive bubbles, but 20 months ­after Trump’s victory, the left remains contemptuous of the values and views of the 63 million Americans who voted for him.
Take the example of one Bill de Blasio, aka Mayor Putz. New York City’s chief executive said he was surprised to learn that more than 200 immigrant children picked up on the Mexican border were being cared for in a Harlem facility, but that didn’t stop him from jetting to Texas for a photo-op.
After traveling 2,000 miles — on the taxpayers’ dime, of course — The Putz stood outside a fence at an El Paso immigration site so TV cameras could record his futile ­request to get inside.
“Hi, how you doing? Mayor Bill de Blasio, mayor of New York City, is there a supervisor to talk to here?” he asked a guard.
The guard didn’t respond, but no matter. Mission accomplished.
After all, what would de Blasio have done if he got inside to actually meet a federal official? And if he really wanted to help immigrant children, he could have stayed in New York.
Ah, but he would get no political points for that. He scored by demonstrating his commitment to the left’s outrage of the moment and going on MSNBC to preach to the choir.

De Blasio is not alone in exploiting the human suffering at the border. A whining Hillary Clinton and the odious Linda Sarsour are among those trying to fundraise off other people’s misery.
They rattle their tin cups, issue calls to marches and attack Trump, but none offers a practical response to one of America’s most vexing problems: What to do about the human waves washing up on our southern border.
Certainly the previous administration didn’t have an answer other than to apprehend tens of thousands of illegal crossers and bus them to unsuspecting communities across America while they supposedly waited for immigration hearings. Federal officials say 97 percent — 97 percent! — never showed up for those hearings.
Unfortunately, Trump doesn’t have the answer either, as the poorly planned “zero tolerance” policy showed. The brainchild of Attorney General Jeff Sessions, it included no preparations for dealing with the predictable clamor over separating families so the adults could be prosecuted.
Trump quickly realized he could not fight the power of a thousand heart-rending photos (a few of which were staged or mislabeled) and tried to get off the hook with a new executive order that would keep families together. It may buy him a little time — but only a little.
That’s because, in addition to the logistics of handling the sheer number of illegal crossers and asylum seekers amid the thicket of laws and court rulings, the GOP can’t get its act together to pass legislation despite controlling Congress.
So Trump stands alone, which means immigration will continue to defy solution. Though he has vacillated on details, the president at least offers a sensible position that’s easy to grasp: America must control its borders and decide who gets to come in, as virtually every other nation in the world does.
In addition to repeating his promise to build a wall, he met Friday with “Angel Families,”who lost loved ones during crimes committed by illegal immigrants, some of whom had been deported numerous times. To the media and advocates who celebrate all immigrants, the “Angel Families” are invisible.
Because stopping illegal immigration is popular in much of the nation, it is not surprising that an early poll finds most criticism directed at the Central American parents who risk their children’s lives by bringing them on the dangerous journey or sending them with smugglers.
Rasmussen reports that 54 percent of likely voters said the parents are more to blame for the crisis, against 35 percent who say the government is more to blame.
Meanwhile, the left is going in the opposite direction by uniting behind California Sen. Dianne Feinstein, who turned 85 last week and is seeking another six-year term. Trying to rally the far-left base in her blue state, Feinstein ­authored a bill that would, among other things, prohibit an arrest for illegal entry anywhere within 100 miles of a border.
Incredibly, the other 48 Senate Dems signed on, meaning they’ve all cast their lots with an outlandishly radical policy.
Yet Feinstein and others insist they don’t favor open borders. OK, then, let’s put it this way: they favor no borders and want the US to admit the whole world, free of charge and no questions asked.
Yeah, that’ll sell in November.

“Things That Matter” was the title of Charles Krauthammer’s 2013 book, a collection of essays on politics, baseball, medicine and Western Civilization, to name a few of his favorite topics.
An update would include the author himself. Krauthammer, who died Thursday at 68, lived a life that mattered.
His range of knowledge, brilliant insights and precision of expression have no equal on the public stage today. That he achieved such eminence despite a youthful accident that left him paralyzed from the neck down adds to the aura.
He is missed already.

New York is freeing another cop-killer from prison

What is it with Gov. Cuomo and convicted cop killers?

With murderer Robert Hays about to be the second one released on parole, Cuomo is hiding behind a fig leaf. He appointed 10 of the 12 members on the state parole board, but insists the board is “independent” and there’s nothing he can do.
Strange. He isn’t so modest about other supposedly independent agencies, including the MTA, where he picks the leaders and dictates spending priorities.

Headline: For the second year, Bernie Sanders earns more than $1 million.
Who knew socialism paid so well?
Source>https://nypost.com/2018/06/23/democrats-refuse-to-acknowledge-safe-borders-are-necessary/
Posted by theodore miraldi at 8:38 AM