Republican Rep. Trey Gowdy tore into Deputy Attorney General Rod Rosenstein on Thursday over the long-running Russia collusion probe -- telling the Justice Department at a public hearing to “finish it the hell up because this country is being torn apart.”
Gowdy’s excoriation marked a stunning moment at the already-tense House Judiciary Committee hearing, amid a months-long battle between congressional Republicans and the Department of Justice over its handling of both the Russia probe and Hillary Clinton email investigation.
At the hearing, Gowdy, R-S.C., spoke to frustration over the protracted Russia investigation that Rosenstein oversees, suggesting that despite a host of charges against Trump-tied figures, the investigation has not found evidence of presidential wrongdoing.
“We’ve seen the bias, we need to see the evidence,” Gowdy said. "If you have evidence of wrongdoing by any member of the Trump campaign, present it to the damn grand jury. If you have evidence that this president acted inappropriately, present it to the American people.”
“Whatever you got, finish it the hell up, because this country is being torn apart,” he said.
“The best thing we can do is finish it appropriately, and reach a conclusion,” Rosenstein assured, adding that nobody should "draw any conclusions" beyond the charges filed.
Rosenstein, meanwhile, was grilled repeatedly Thursday by House Republicans over everything from his department’s role in Trump campaign surveillance to alleged stonewalling of congressional document requests to the damning watchdog report on FBI conduct during the Clinton email probe.
The top DOJ official, who oversees the special counsel’s Russia probe, sought to defuse tensions – vowing to hold wrongdoers accountable in the wake of the inspector general report and defending the response to congressional requests for documents related to the Russia investigation.
“As with most things in Washington, the real work is not done on television and it is not all done by me,” Rosenstein said. “Trump administration officials are meeting and talking to your staffs every day to accommodate requests and produce relevant information to this committee, other committees and several Senate committees.”
Yet as the hearing was ongoing, the House of Representatives was debating and voting on a non-binding resolution insisting the Justice Department comply with House committee subpoenas for documents. It passed 226-183 along party lines, with Rep. Justin Amash, R-Mich., voting present.
Rep. Jim Jordan, R-Ohio, cited that looming vote as he personally challenged Rosenstein at the hearing over his compliance.
“Why are you keeping information from Congress?” Jordan asked.
“It is not accurate, sir,” Rosenstein said. 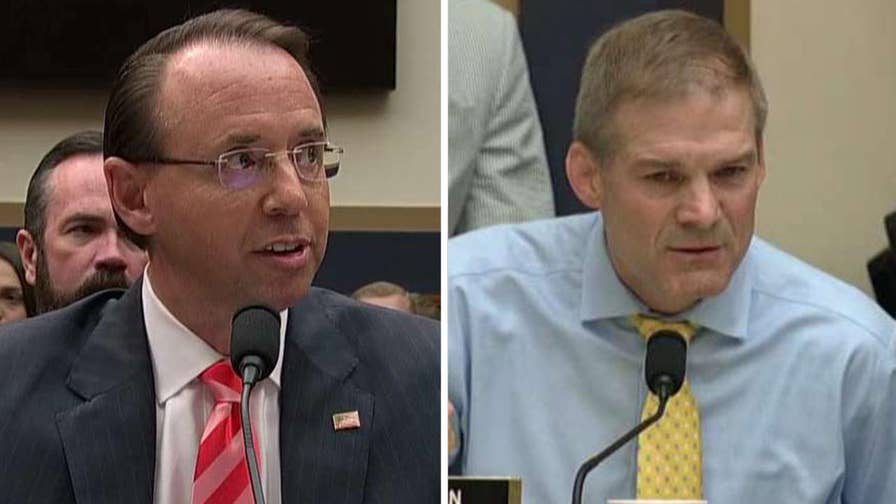 “We have caught you hiding information,” Jordan countered.
Rosenstein insisted his team was responding to their requests.
Rosenstein also said “we’re not withholding anything,” in response to questions from committee member Rep. Ron DeSantis, R-Fla., over newly revealed texts between FBI agent Peter Strzok and former FBI lawyer Lisa Page. A bombshell text in the IG report showed Strzok vowing to "stop" the election of President Trump.
Rosenstein also denied allegations from Jordan that he had Strzok avoid answering certain questions during a closed-door appearance before the committee a day earlier.
Further, he said he could not discuss classified information in an open setting when asked what the DOJ and FBI did to surveil the Trump campaign, including the reported work of an informant apparently in contact with members of that campaign in 2016.
Rosenstein further rebuffed GOP suggestions that he recuse himself from the Russia probe, repeatedly denied allegations first reported by Fox News that he once threatened to subpoena GOP committee members and declined to comment about his role in approving a surveillance application for a Trump adviser. Rosenstein would not say whether he read the application, but stressed he’s “confident” about his conduct and sees it as “highly, highly unlikely” that the inspector general would find wrongdoing on his part as part of an ongoing review.
Rosenstein, meanwhile, discussed the DOJ inspector general findings on the Clinton email case, saying “today is not a happy occasion.”
Rosenstein said it showed some FBI officials “deviated from important principles.”
“Everyone knew about some of those departures as they occurred. We learned about others through the internal investigation, such as leaking to the news media, and political bias,” Rosenstein said. “We need to correct errors, hold wrongdoers accountable and deter future violations.”
Rosenstein said that the Justice Department has already implemented “mandatory annual training” to address the concerns.
Rosenstein and Wray have been criticized for months by Republicans on Capitol Hill who have suggested that the agencies are stonewalling congressional committees’ requests for documents related to the beginning of the Russia investigation. Committees have requested documents related to Foreign Intelligence Surveillance Act warrants issued to surveil former Trump campaign associate Carter Page and on the FBI’s use of a confidential human source in the Trump campaign—also known as an FBI informant. 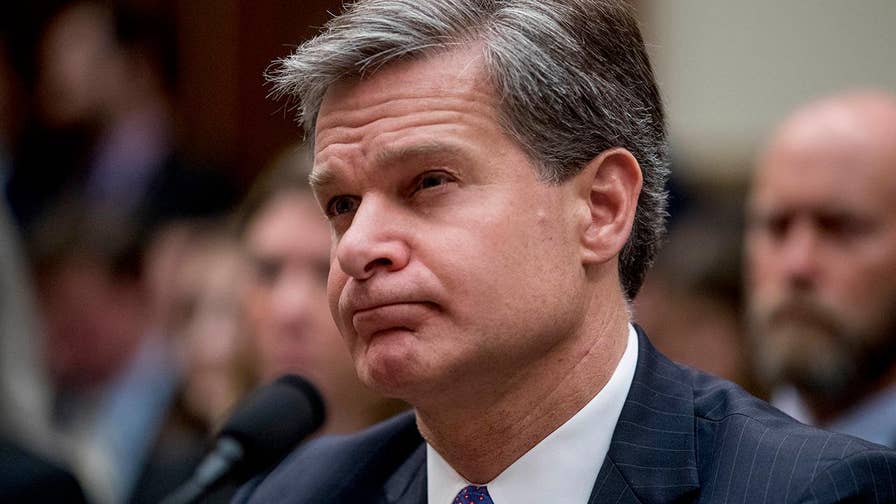 But Democrats have pushed back against those requests, with Democratic leaders sending a letter to Rosenstein and Wray on Tuesday, expressing concern that the agencies are bowing to pressure from Republicans to disclose sensitive information.
“With every disclosure, DOJ and FBI are reinforcing a precedent it will have to uphold, whether the Congress is in Republican or Democratic hands, of providing materials in pending or closed cases to the legislative branch upon request," the letter signed by House Democratic Leader Nancy Pelosi, D-Calif.; Senate Democratic Leader Chuck Schumer, D-N.Y.; House Intelligence Committee Ranking Member Adam Schiff, D-Calif.; and Senate Intelligence Committee Vice Chairman Mark Warner, D-Va., said.
"As the attacks on the Special Counsel intensify, it is imperative that you withstand pressure on DOJ and FBI to violate established procedures and norms. Your role in preserving the integrity of the Special Counsel’s investigation and, most importantly, our justice system has become even more vital," the letter says.
Last week, the Justice Department gave House Republicans some of the documents they sought related to the Russia investigation and the Hillary Clinton email probe—after lawmakers threatened to hold officials in contempt of Congress for stonewalling requests.
The House Judiciary Committee and House Intelligence Committee had requested more than a million documents from the FBI and DOJ related to the Clinton investigation and surveillance of members of the Trump campaign during the 2016 presidential campaign.
Fox News' Judson Berger and Chad Pergram contributed to this report.
Source>http://www.foxnews.com/politics/2018/06/28/rosenstein-wray-testify-before-house-judiciary-committee-amid-battle-over-documents-related-to-russia-probe.html
Posted by theodore miraldi at 1:15 PM