How Israel is Pulling Russia AWAY From IRAN 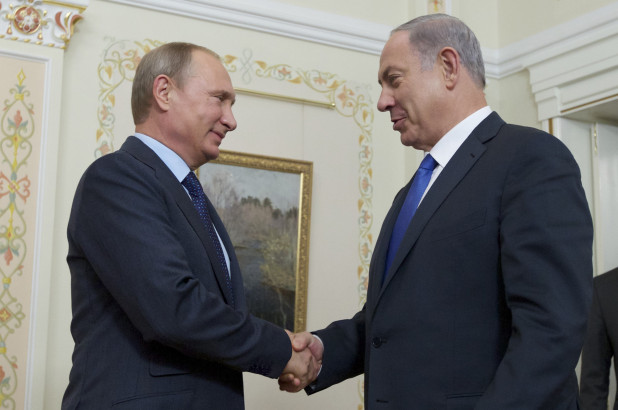 Since Iran and Russia reached an agreement in the summer of 2015 to coordinate a military campaign to save the regime of Syria’s dictator, that war has held together an unholy alliance of those three states. It worked. Bashar al-Assad has withstood the uprising.
Now, as that war comes to a close, the Iranian-Russian alliance that saved Assad appears to be fraying. Consider recent developments. Last month, Russian President Vladimir Putin told Assad foreign military forces will exit Syria at the onset of a political process to end the war. Last week, Russian Foreign Minister Sergei Lavrov said all foreign forces — a reference to Iran and its allied militias — should immediately leave the Daraa province, which borders Israel. On Friday, a leading Arab newspaper reported that Israel and Russia reached an agreement this week for just that.
All of this is significant for a few reasons. To start, being forced to withdraw from Syria would be a major blow to Iran’s prestige at a moment when its economy is bracing for crippling sanctions following America’s withdrawal from the nuclear deal. The removal of Iran and its allied militias from Syria would stymie Tehran’s plans for a land bridge to southern Lebanon — a supply line of advanced weapons to Iran’s most important client, Hezbollah.
Preventing a permanent Iranian presence in Syria has been a top priority for Israeli Prime Minister Benjamin Netanyahu in the last two years. In 2017, he pressed the Trump administration to commit to challenge Iranian forces in Syria after victory in the campaign against ISIS. He wasn’t successful, so he tried something different: He went to Moscow.
Israel has had a channel to Moscow since Russia first established its air presence in Syria in fall 2015. That channel, though, was primarily to warn Russia’s military when Israel launched airstrikes on convoys and shipments of arms to Hezbollah.
In the last year, Netanyahu and his top ministers have stepped up diplomacy with Moscow to make the strategic case that it’s not in Russia’s interest to allow Iran to turn Syria into a client state like Lebanon, according to US and Israeli officials.
The latest such visit was on Thursday when the Israeli defense minister, Avigdor Lieberman, flew to Moscow to meet with his Russian counterpart. Following those meetings, Lieberman tweeted: “The state of Israel appreciates Russia’s understanding of our security concerns, particularly regarding the situation at our northern border.”
So far, that understanding has resulted in a new policy from Russia toward Israeli airstrikes in Syria. Russia has the ability to protect Iranian forces with its own air force and air defense systems in Syria, but it has opted not to use them to stop Israel.
An element of the Israeli strategy has also been to back up the diplomacy with force in Syria. In the last two months, the Israelis have gone farther into Syrian territory to strike Iranian targets than they had before.
In April, Israeli airstrikes hit a base deep in Syrian territory, where Iranian commanders were coordinating militias. On May 10, a day after Trump announced the US withdrawal from the nuclear agreement, Iran and Israel exchanged strikes, with Israel hitting major Iranian infrastructure inside Syria.
What’s notable about the May 10 strike is that no Russian officials condemned it. The day before, Netanyahu was in Moscow for meetings with Putin. Netanyahu told Israeli reporters after he returned home that he did not expect Russia to try to protect Iranian targets from Israel.
It’s too soon to say whether Israel’s diplomacy with Russia will result in the removal of Iran and its allied militias from Syria altogether. A senior Israeli diplomat warned me this week no agreement has been made for all of Syria, and that Israel wouldn’t be satisfied with an agreement to only keep Iranian forces away from its border.
Even so, Netanyahu has succeeded diplomatically where the Obama and Trump administrations had failed. The prime minister understands something the Americans have forgotten: Diplomacy can be effective only if the other side believes you are willing to use force if it fails.
Source>https://nypost.com/2018/06/04/how-israel-is-pulling-russia-away-from-iran/
Posted by theodore miraldi at 4:35 PM