If America’s So EVIL, Why Does the LEFT Think IMMIGRANTS Keep Coming? 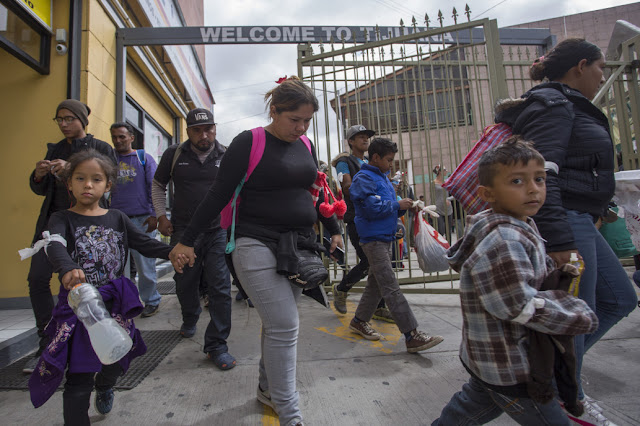 American women live under a suffocating patriarchy. Rape culture flourishes in the US. Toxic masculinity stunts the emotional and professional growth of American females. Sexual harassment and predation are ubiquitous in American workplaces.

These propositions are self-evident to a large, interlocking establishment of government bureaucrats, progressive politicians, college administrators, faculty, “activists,” professionals and journalists.
Yet this same establishment is up in arms over a recent declaration by US Attorney General Jeff Sessions that female aliens caught trying to enter the country illegally will no longer be automatically considered for asylum by dint of claiming that they are victims of domestic abuse.
House Speaker Nancy Pelosi accuses the Trump administration of “staggering cruelty” in condemning “vulnerable innocent women to a lifetime of violence and even death.” The American Bar Association charged that Sessions would “further victimize those most in need of protection.”
Sessions was right to return asylum law to its original intent: offering protection to individuals persecuted by their government for membership in a socially distinct group.
Domestic violence is a private crime, not a public one, and does not reflect general persecution of the sort that international law has codified as appropriate for asylum petitions.
Asylum petitions have mushroomed 1,700 percent from 2008 to 2016, according to The New York Times, driven in significant part by domestic-abuse claims, often underwritten by extensive coaching and encouragement from hard-left advocates.
But why should social-justice warriors want to subject these potential asylees to the horrors of America?
In coming to the US, if you believe the dominant feminist narrative, the female aliens would simply be exchanging their local violent patriarchy for a new one. Indeed, it should be a mystery to these committed progressives why any Third World resident would seek to enter the US.
Not only is rape culture pervasive in the US, but the very lifeblood of America is the destruction of “black bodies,” in the words of media star Ta-Nehesi Coates. Surely, a Third World person of color would be better off staying in his home country, where he is free from genocidal whiteness and the murderous legacy of Western civilization and Enlightenment values.
But the same left-wing establishment that in the morning rails against American oppression of an ever-expanding number of victim groups in the afternoon denounces the US for not giving unlimited access to foreign members of those same victim groups.
In their open-borders afternoon mode, progressives paint the United States as the only source of hope and opportunity for low-skilled, low-social-capital Third Worlders; a place obligated by its immigration history to take in all comers, forever.
In their America-as-the-font-of-all-evil-against-females-and-persons-of-color morning mode, progressives paint the US as the place where hope and opportunity die under a tsunami of misogyny and racism.
Which reality do progressives actually believe? They likely hold both mutually exclusive concepts in their heads simultaneously, unaware of the contradiction, toggling smoothly between one and the other according to context. But both claims cannot be true.
And actions speak more loudly than words. In pressing for an immigration policy determined by the desire of hundreds of millions of foreigners to enter the US, progressives implicitly acknowledge that the left-wing narrative about America is false. In fact, there is no place on earth less governed by tribal prejudice and machismo than the United States. The left-wing narrative is simply a form of moral preening.
The US southern border is currently beset by a flow of Central American migrants who have been coached to tell border guards the magic words: that they have a “well-founded fear of persecution” in their home country. Once someone claims asylum, he is usually released on his own recognizance, free to show up — or not — for his immigration hearing.
If he commits a crime, or otherwise ends up in deportation proceedings, his supporters will cry that he has an application for asylum “pending.” There is now a backlog of over 300,000 asylum claims in the courts.
The most important reason why the US is such a magnet to people the world over is the rule of law. Progressives would destroy that lawfulness, even as they publicly deny its legacy of tolerance and justice.
Source>https://nypost.com/2018/06/15/if-americas-so-evil-why-does-the-left-think-immigrants-are-rushing-in/
Posted by theodore miraldi at 9:38 AM