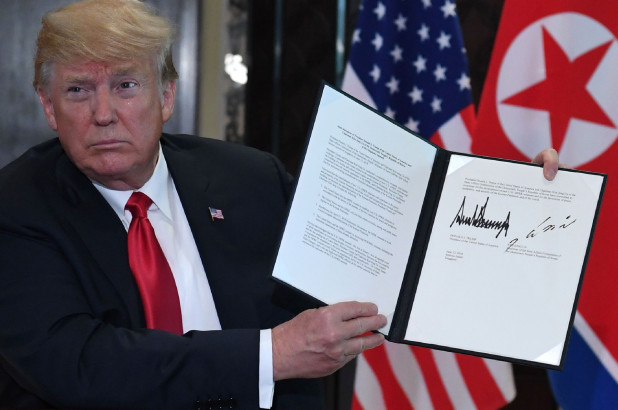 
President Trump and North Korean leader Kim Jong Un signed what Trump says is a “very important” and “pretty comprehensive” document after their Tuesday Summit in Singapore.
Trump and Kim refused to immediately tell reporters what the declaration said, saying it would be handed out later.
However, after signing it, Trump held up the papers for photographers – and the agreement was briefly visible.
“President Trump committed to provide security guarantees to the DPRK and Chairman Kim Jong Un reaffirmed his unwavering commitment to complete denuclearization of the Korean Peninsula,” according to a preamble of the document.
The document appeared to include a loose, four-point agreement between the nations:
Earlier in the day, Secretary of State Mike Pompeo defined security guarantees for North Korea as “sufficient certainty that they can be comfortable that denuclearization isn’t something that ends badly for them”.
Trump said Tuesday, as the leaders wrapped up their historic summit in Singapore, that he and Kim “have developed a very special bond” during their day together.
And he says, “Both sides are going to be impressed with the result.”
Kim told reporters that “the world will see a major change,” though it’s unclear how.
The summit marked the first between a sitting U.S. president and a North Korean leader.
With Post Wires
Source>https://nypost.com/2018/06/12/kim-jong-un-commits-to-complete-denuclearization-of-the-korean-peninsula-document/
Posted by theodore miraldi at 5:12 AM