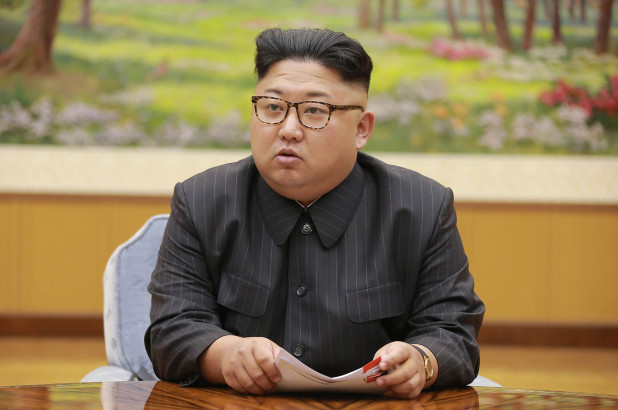 
Nix the nuclear warheads, cue the doves.
The North Korean government is erasing much of its anti-U.S. propaganda following dictator Kim Jong-un’s forays onto the world stage.
Gone are the posters depicting the U.S. as a “rotten, diseased, pirate nation” and promising “merciless revenge” on American forces for an imagined attack on the totalitarian country.
In their place are cheery messages touting praising the prospects for Korean reunification and the declaration Kim signed in April with South Korean President Moon Jae-in promising “lasting peace,” according to reports.
Still the most isolated country in the world, very few North Koreans have access to news and information from the outside world. So state propaganda plays a huge role in shaping their views.
Murals, banners and posters displayed throughout the capital, Pyongyang, have for decades depicted the U.S. as a brutal, imperialist aggressor hell-bent on destroying the North Korean regime. South Korea and Japan were also frequently targeted as willing allies of the U.S.
But things started to take an Orwellian turn in the run-up to Kim’s June 12 summit with President Donald Trump, with the old posters vanishing since then.
“All the anti-American posters I usually see around Kim Il-sung Square and at shops, they’ve all just gone,” Rowan Beard, a tour manager at Young Pioneer Tours, told Reuters. “In five years working in North Korea, I’ve never seen them completely disappear before.”
Infamous posters and postcards showing North Korean missiles on their way to Washington are a thing of the past. Also removed are the anti-American trinkets that used to be sold to tourists as souvenirs. In their place are items showing themes of Korean reunification.
The change extends to the country’s government-controlled media. News reports that once depicted the U.S. as hostile, and its involvement in places like Syria as proof of imperialism, are no longer critical. The Financial Times said the main newspaper, Rodong Sinmun, hasn’t featured a direct attack on Trump since March, when he agreed to meet with Kim.
The paper was filled with pictures of the two together at the summit, and is no longer reporting anti-U.S. news. Other international events, like Kim’s visit last week to China, are being reported right away, rather than after a waiting period, and in more neutral language.
“This is fascinating,” Peter Ward, North Korea expert and writer for NKNews, told the BBC. “Generally speaking, neutral or positive coverage is normally reserved for countries that Pyongyang has friendly relations with.”
In one sign that relations are improving, the U.S. military said it positioned at least 100 wooden coffins at the border of North and South Korea on Saturday to prepare for the return of the remains of U.S. service members missing since the Korean War.
While the preparation suggests that the repatriation could happen soon, details about timing and location remain unclear.
Kim agreed to return the remains during the June 12 summit.
The Defense POW/MIA Accounting Agency says 7,697 Americans are unaccounted for from the 1950-1953 war. About 5,300 of those are believed to be in North Korean territory. Roughly 400 remains have been recovered from North Korea since 1990.
Source>https://nypost.com/2018/06/23/north-korea-erasing-most-anti-us-propaganda/
Posted by theodore miraldi at 8:24 AM