Number ONE Again: US Restores TOP Ranking As Most COMPETITIVE Global ECONOMY, As Democrats FRET

Guy Benson
US voters will differ sharply on whether President Trump has 'made America great again,' but the economy over which he's presiding is undeniably on the upswing -- with several of his key policies playing essential roles in that comeback.  The latest piece of data that fortifies America's renewed economic vigor is a surge in international competitiveness, as measured by a closely-watched annual ranking from a Switzerland-based think tank.  Following tax reform's burst of hiring and growth, the United States has 'leapfrogged' back into the top slot (via Bloomberg):

The U.S. dethroned Hong Kong to retake first place among the world’s most competitive economies, thanks to faster economic growth and a supportive atmosphere for scientific and technological innovation, according to annual rankings by the Switzerland-based IMD World Competitiveness Center. The U.S., which reclaimed the No. 1 spot for the first time since 2015, scored especially well in international investment, domestic economy and scientific infrastructure sub-categories while earning below-average marks in public finance and prices. The renewed top ranking aligns with the positive U.S. growth narrative over the past year. Growth averaged 2.9 percent in the four quarters through March, versus 2 percent in the prior period.

Meanwhile, in addition to the fabulous May jobs report (which featured the lowest black unemployment rate ever recorded), US consumer confidence spiked to a 17-year high last month -- leading to a surge in consumer spending: "Americans’ spending gathered further momentum in April as incomes continued to rise, a sign consumers could drive stronger economic growth in the second quarter. Personal-consumption expenditures, a measure of household spending on everything from health care to magazines, increased a seasonally adjusted 0.6% in April from the prior month, the Commerce Department said Thursday. That was the largest increase in five months and above the 0.4% rise that economists...expected," the Wall Street Journal reports.  The good news doesn't stop there. On President Trump's 500th day in office, Senate Majority Leader Mitch McConnell delivered a floor speechhighlighting that more than one million American jobs have been created since the passage of tax reform:

"Since President Trump was elected alongside a Republican Congress, the number of Americans who say they’re optimistic about finding a good job has jumped by 25 percentage points. And small business owners report in record numbers that they’re optimistic about prospects of hiring new employees...But as impressive as some of these statistics may be, I think it’s important to keep in mind that these stories are -- at the end of the day -- human stories. More than one million new jobs have been created just since we passed tax reform last December. That’s not an abstract number...These aren’t just economic statistics. They are American men and women who have new chances to support their families and build their lives that they simply did not have under the policies of the previous administration. I’m glad we fought, won -- and will continue to win -- major accomplishments for the middle-class families we represent."

One million new jobs (and counting), a sizable portion of which the CBO attributes directly to the GOP tax law, which every single Democrat in Congress opposed -- making false, apocalyptic predictions to justify their hysterical, knee-jerk resistance. Like Hillary Clinton, they're being proven wrong by actual results, and they're responding with a 'repeal' tantrum. Repealing the tax cuts for middle class families (all income groups received a tax cut) would reduce incomes and hamper economic consequences. Repealing the business tax cuts, which restored American competitiveness, would claw back crucial progress on job creation and wage growth.  It's not hard to tell that the robust economic news is now a source of alarm to election-minded Democrats.  Here's tre hilarious spin:
The truth?  "Jobs report raises GOP hopes for midterms, while worrying Dems:"

A strong jobs report on Friday bolstered the GOP’s argument that the economy is humming under President Trump, raising Republican optimism for the midterms. The economy added 223,000 jobs in May, a bigger than expected number that was coupled with news that unemployment had fallen to 3.8 percent. It extends the good economic news for Trump and the GOP, which has seen a series of favorable jobs reports this year...The president’s party almost always loses congressional seats in the first midterm. At the same time, some acknowledge the economy could help the GOP. “I do think this is the single biggest challenge, by far, faced by the Democrats, and it will determine whether we pick up 30 seats or 50 seats,” Celinda Lake, a Democratic pollster, said of the economy. Democrats need to pick up 23 seats to win control of the House and two seats to seize the Senate. “We have to get ahead on the economy. We’re still behind today,” Lake added. Trump’s job approval rating has picked up this year, and the once-substantial lead that Democrats had on the generic congressional ballot has shrunk.

Why should voters trust Democrats on the economy? Their policies helped contributeto the 2008 meltdown, then choked what should have been a major bounceback with wasteful and destructive policies, leading to the slowest recovery since World War II. After that, they've railed against Republican-led progress, fighting it at every turn. If not for a unified GOP government, our economy would likely still be puttering along. Democrats see all this and wring their hands as Trump gets the credit, with 2018 polling moving accordingly:

I know what you’re thinking, that his numbers are rising and the Dems’ are falling because of Friday’s dynamite jobs report. Not really the case, as it turns out. Here’s Trump, who’s at 44.6 percent today, a number he hasn’t touched since March 12 of last year...In reality, though, only two polls of Trump’s job approval have been conducted since the jobs report came out. One was Rasmussen, which had him at 48 percent but which normally has him several points higher than other pollsters do. The other was Gallup, which put him at a ho-hum 41 percent. His 44.6 percent number is built on a trifecta of polls that came out *before* the jobs report: Reuters, YouGov, and Harvard-Harris all had him at 44-45 percent. And the generic ballot? Not a single poll has been published about that since Friday...Democrats are down to 43 percent even, nearly a full point lower than their next-lowest tally of the Trump era.

A blue wave may yet crash down on the GOP (this distinction is important, and references the late breaker effect that propelled Republicans to a smashing win in 2014), but the roaring economy is unquestionably buoying the GOP's chances.
UPDATE - More promising economic developments, suggesting that America's already-strong trajectory has room for even more improvement: 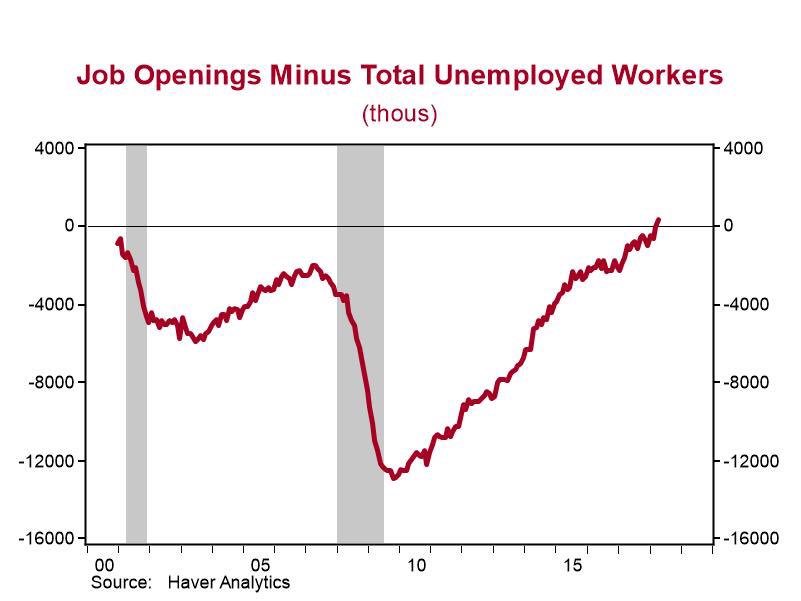