Deputy Attorney General Rod Rosenstein threatened to “subpoena” emails, phone records and other documents from lawmakers and staff on a Republican-led House committee during a tense meeting earlier this year, according to emails reviewed by Fox News documenting the encounter and reflecting what aides described as a "personal attack."
The emails memorialized a January 2018 closed-door meeting involving senior FBI and Justice Department officials as well as members of the House Intelligence Committee. The account claimed Rosenstein threatened to turn the tables on the committee's inquiries regarding the Russia probe.
“The DAG [Deputy Attorney General Rosenstein] criticized the Committee for sending our requests in writing and was further critical of the Committee’s request to have DOJ/FBI do the same when responding,” the committee's then-senior counsel for counterterrorism Kash Patel wrote to the House Office of General Counsel. “Going so far as to say that if the Committee likes being litigators, then ‘we [DOJ] too [are] litigators, and we will subpoena your records and your emails,’ referring to HPSCI [House Permanent Select Committee on Intelligence] and Congress overall.”
A second House committee staffer at the meeting backed up Patel’s account, writing: “Let me just add that watching the Deputy Attorney General launch a sustained personal attack against a congressional staffer in retaliation for vigorous oversight was astonishing and disheartening. ... Also, having the nation’s #1 (for these matters) law enforcement officer threaten to 'subpoena your calls and emails' was downright chilling.”
The committee staffer noted that Rosenstein’s comment could be interpreted as meaning the department would “vigorously defend a contempt action" -- which might be expected. But the staffer continued, "I also read it as a not-so-veiled threat to unleash the full prosecutorial power of the state against us.” 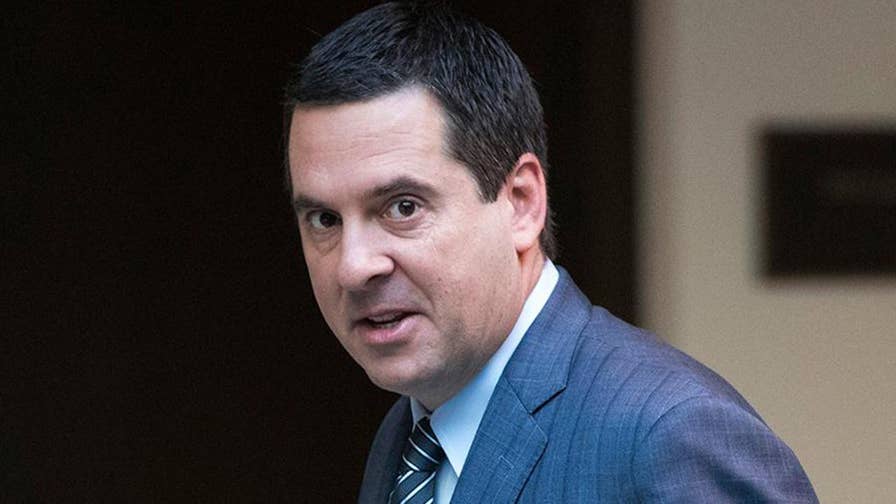 Representatives with both the DOJ and FBI disputed the account in the emails.
“The FBI disagrees with a number of characterizations of the meeting as described in the excerpts of a staffer’s emails provided to us by Fox News,” the FBI said in a statement.
A DOJ official told Fox News that Rosenstein “never threatened anyone in the room with a criminal investigation.” The official said the department and bureau officials in the room “are all quite clear that the characterization of events laid out here is false,” adding that Rosenstein was responding to a threat of contempt.

“The Deputy Attorney General was making the point—after being threatened with contempt — that as an American citizen charged with the offense of contempt of Congress, he would have the right to defend himself, including requesting production of relevant emails and text messages and calling them as witnesses to demonstrate that their allegations are false,” the official said. “That is why he put them on notice to retain relevant emails and text messages, and he hopes they did so. (We have no process to obtain such records without congressional approval.)”
Further, the official said that when Rosenstein returns to the United States from a work trip, “he will request that the House General counsel conduct an internal investigation of these Congressional staffers’ conduct.”
Details of the January 2018 meeting first trickled out in the immediate aftermath. Fox News' Gregg Jarrett tweeted in February on the purported subpoena threat.

A 2nd source has now confirmed to me that, in a meeting on January 10, Deputy A-G Rosenstein used the power of his office to threaten to subpoena the calls & texts of the Intel Committee to get it to stop it’s investigation of DOJ and FBI. Likely an Abuse of Power & Obstruction.

Twitter Ads info and privacy
But the emails, reviewed by Fox News, provide additional details about that encounter. A former Justice Department official said the account may help explain how the relationship between the DOJ and the Republican-led House committee has broken down in the months since.
“This is much worse than a deteriorating relationship – this is a massive breakdown in the system. A deputy attorney general does not make subpoena threats lightly. This is not the norm to say the least,” Tom Dupree, the former principal deputy assistant attorney general under the George W. Bush administration, told Fox News. “It’s hard to tell whether [Rosenstein] was sending a message to back off, or whether he was just trying to illustrate how invasive he considered the demands from Congress. But either way, it is a clear signal that the relationship is fractured, and it’s not clear how things will get repaired.”
The tense session over the boundaries of congressional oversight – and the Justice Department's concern for protecting sources and methods – appears to have set the tone for a sustained records dispute as well as the latest confrontation over Chairman Devin Nunes’ request for information related to an alleged FBI confidential human source who was in contact with the Trump campaign.
A senior Justice Department official said Rosenstein and others have offered to meet Thursday with a group of House leaders known as the Gang of Eight. In a letter, Nunes, R-Calif. – whose staffers documented the Jan. 10 meeting – made clear he wants the records made available to all intelligence committee members and select staff two days earlier.
The Jan. 10 meeting came amid government surveillance abuse allegations, outstanding House subpoenas for Russia probe records and the looming threat of contempt. The Capitol Hill session pertained to a request for a sensitive document, according to the emails – and included Rosenstein, Associate Deputy Attorney General Scott Schools, Assistant Attorney General for Legislative Affairs Stephen Boyd, then-FBI Assistant Director Greg Brower and FBI Director Christopher Wray, as well as Nunes and three committee staffers.
The emails reviewed by Fox News show at least two committee staffers memorialized their concerns about the deputy attorney general’s alleged statements, at the request of the Office of General Counsel.
“I know I’ve relayed the following to you over the phone, and per your suggestion reducing it to writing so there is at least some record of the event,” wrote Patel, who is now the committee's national security adviser.
The two staffers were pressed on whether Rosenstein could justify the comments as "merely referring to how DOJ would vigorously defend any litigation that the committee might initiate?” -- an apparent reference to Nunes' threat to hold Rosenstein and Wray in contempt for not providing records.
“I took ... it as the DAG’s clearly articulated course of action should the committee continue its investigation in the current manner, which he found unacceptable and improper. It was not in response to how they would defend litigation (ie contempt or the like),” Patel responded. "It was about leaks, source contact, and other alleged disclosures by the committee."
Asked about the January meeting, Nunes provided a statement to Fox News noting they referred the incident to House Speaker Paul Ryan’s office: “The Intelligence Committee considers staff concerns at the most serious level, especially those involving interactions with the executive branch. Based on the justified concerns expressed by our lead staff investigators, we referred this matter to the Speaker’s Office.”
Fox News provided extensive quotes from the emails and offered an opportunity to respond to all parties. The House Office of General Counsel declined to comment. A source close to the speaker said they “encouraged the Committee to work through the non-partisan DOJ Inspector General’s Office.”
A committee source said “going to DOJ IG is one of several steps under consideration.”
The DOJ official later said in an email that "no formal complaint was ever filed [with] the GC or IG." The official also said that Rosenstein and Nunes "went to dinner with a mutual friend the night of this meeting and the chairman didn't raise any concerns about the conversation at that dinner."
Dupree, though, said the tensions between Congress and the Justice Department go well beyond the traditional oversight negotiations.
"Rarely, if ever, has it deterioriated to this point where you have what appears to be threats going back and forth between the two sides," he said.
Fox News' Pamela Browne and Cyd Upson contributed to this report.