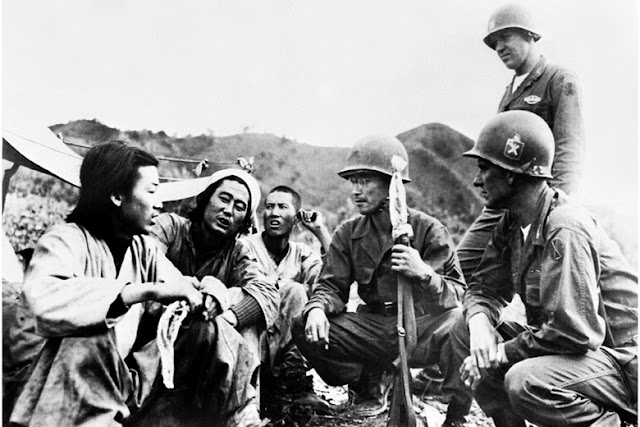 Two North Korean brothers who had fled their war-torn country by hiding in the forest tell their story to Charles Mount, a young American colonel on June 25, 1951.
AFP/Getty Images


“Can you believe that we’re talking about the ending of the Korean War?” President Donald Trump said to reporters after a recent White House meeting with a representative of the North Korean government, teasing that a formal end to the 1950–53 conflict “could happen” at his upcoming summit with Kim Jong-un. It’s quite possible that many in the room actually couldn’t believe it, because one can be an informed American in 2018 and not even realize we’re still in the Korean War.

When the Korean War ended, the participants in the conflict—North and South Korea, China, and U.N.-forces led by the United States—only signed an armistice, rather than a formal peace treaty, meaning that they are, in some sense, still at war. This fact is often mentioned in news coverage of tensions between these countries, though mostly as a historical curiosity. Despite the continuing presence of nearly 35,000 U.S. troops in South Korea and periodic scares and skirmishes over the past six decades, it hasn’t felt much like the U.S. is at war with North Korea. (In North Korea, where schoolchildren are encouraged to bayonet effigies of U.S. soldiers, it may be a different matter.) Then again, it didn’t feel like much of a war when the actual fighting was happening either. But in many ways, the Korean War set the template for the sorts of conflicts—and the domestic debates surrounding those conflicts—of the decades that would follow. America has been fighting the Korean War for the past 68 years, in more ways than one.

At the time, the Korean War was a little understood conflict, with inconclusive results, in a country few American knew much about. It didn’t involve anything like the mass national mobilization of World War II a few years earlier, or the television coverage that would bring the war in Vietnam into American living rooms a few years later. Despite the deaths of more than 36,000 U.S. troops and the fact that it was the last time troops from two major world powers—the U.S. and China—fought directly on the battlefield, it has become known as the “forgotten war.” Compared with other U.S. conflicts, there are few books about it. In debates about foreign policy and the use of force, politicians and experts constantly invoke the legacy of Munich, or the Vietnam syndrome, or the lessons of Iraq—but almost never Korea.

The Korean war was a preview of many of the mistakes made in wars to come, from Vietnam to Afghanistan to Iraq.

The main thing that the Korean War demonstrated was that America would, in fact, continue to face major armed conflict. In the late 1940s, this was an open question: World War II’s devastation in Europe had left the United States as the world’s pre-eminent superpower and the Cold War was only just starting to heat up. Given that the U.S. was in possession of the atomic bomb, it was unclear why it still needed to maintain hundreds of thousands of men and women in uniform. Budgets and manpower were cut sharply, and there was active discussion about the extent to which the Navy and Marines would be required in the wars of the future at all. As a result, when North Korean troops shocked the world by crossing the 38th parallel into U.S.-backed South Korea in 1950, America had a military that, as then–Chairman of the Joint Chiefs of Staff Omar Bradley put it, “could not fight its way out of a paper bag.” U.S. forces were nearly run off the peninsula by the more numerous and battle-hardened North Koreans in the early months of the war.

After Korea, things would be different: It became gospel that America would have to maintain not only permanent war readiness and an edge on spending and military technology over its communist adversary, but also the ability to dispatch troops into combat anywhere in the world. For many of us today, it’s sad to think that our current permanent war economy was not necessarily inevitable, but for the cold warriors, this shift was a godsend. “Korea saved us,” Secretary of State Dean Acheson said.

From Korea on, American wars would be different. For one thing, the United States would never again declare war. The Korean War was authorized not by Congress but by the U.N. Security Council (a fluke made possible by the fact that the Soviet Union was boycotting at the time). President Harry Truman never actually used the infamous phrase police action to describe the war—he just agreed with a journalist who used it—but the euphemism continued to dog him as the war dragged on and the body count rose. It was in Korea that a blurring of the line between peacetime and wartime began, a blurring that continues in today’s debates over the legal basis for the war on terrorism.

Starting with Korea, America’s conflicts would be “small wars in faraway places,” where the immediate implications for U.S. national security would be ambiguous, and victory elusive. World War II left the American public primed to expect total triumph. But rather than only ending the Korean War if North and South were reunified and communism defeated, the Truman and, later, Eisenhower administrations opted to settle for restoring the border between North and South Korea where it remains today. Americans were understandably outraged that thousands of young men were being asked to “die for a tie.” As David Halberstam writes, the unpopularity of Truman’s conduct of the war was born out of “frustration with a conflict that was so unsatisfying and distant and gray and brought so little in the way of victories and seemed so strangely beyond the reach of our absolute weapons.” That could describe any number of conflicts today.

America would learn in Korea that in a nuclear age, the prospect of a full-on showdown between superpowers—in this case, the U.S., Soviet Union, and China—was too terrifying to contemplate, and wars would be limited conflicts with limited goals and generally unsatisfying outcomes. Trump is right that when it comes to war, “we don’t win anymore.” There’s a good reason for that.

Korea was also a preview of many of the mistakes made in wars to come, from Vietnam to Afghanistan to Iraq. A short list: The U.S. was counting on the legitimacy of the brutal and corrupt (but scrupulously anti-communist) South Korean dictator Syngman Rhee, a mistake the U.S. would later repeat with flawed leaders like South Vietnam’s Ngo Dinh Diem and Iraq’s Nouri al-Maliki. Gen. Douglas MacArthur and his staff cherry-picked intelligence to both conceal from Washington how badly the war was going and downplay the risk that China would enter the conflict. The U.S. reliance on the one overwhelming military advantage it did have, air power, has led to decades of (somewhat justified, though heavily manipulated by the regime) anti-American anger from those who were under the waves of airstrikes. The U.S. military entered the conflict with little cultural understanding of Korea and racist notions about its North Korean and Chinese opponents that led it to downplay their capabilities. And as they would again and again in the decades to follow, leaders in Washington failed to understand that while they viewed themselves as leading a righteous crusade against communism, the people getting bombed saw them as just the latest in a long series of occupiers.

Back at home, the politics of the conflict also foreshadowed conflicts to come. With the rise of McCarthyism and the national debate over how the U.S. had “lost” China to Mao Zedong’s communists, the Democrats, under whose leadership the United States had vanquished both the Nazis and Imperial Japan just five years earlier, came to be seen as the party that was weaker on national security—an image the party has never really shaken. Korea was also the beginning of a process of separation between the U.S. military and society at large. Historian Max Hastings writes of one private who returned to his hometown in Connecticut after being discharged, only to be told “so you finally got out of jail,” by a woman he met on the street. After the draft was abolished later, and the proportion of Americans who served in the military continued to shrink, the divide between civilians and service members, and the degree to which civilians no longer felt they had much of a stake in America’s armed conflicts, would only grow.

More than anything else, Korea was an introduction to the sort of wars America would fight going forward—wars in which the U.S. has had overwhelming superiority in technology and firepower but has been hampered by a lack of on-the-ground understanding, unclear aims, and the stark fact that the locals are often more willing to fight and die for what they want for their own country than we are for what we want for someone else’s. It’s an open question whether these are the sorts of wars America will continue to fight as its global influence recedes and its rivals—including its old Korean War foe, China—rise to challenge its power.

With even Trump now acknowledging that “denuclearization” of the Korean Peninsula is unlikely to be achieved in the Singapore meeting, it’s starting to look like a peace agreement for a decades-old conflict might end up being the best hope for a deliverable from this highly anticipated encounter. What ending a war that no one is currently fighting would actually mean in practice is a little unclear. But with so many of the global power dynamics shifting, this does feel like a fitting time to wrap up this one piece of unfinished business from the beginning of the nuclear age.

Posted by theodore miraldi at 6:27 AM