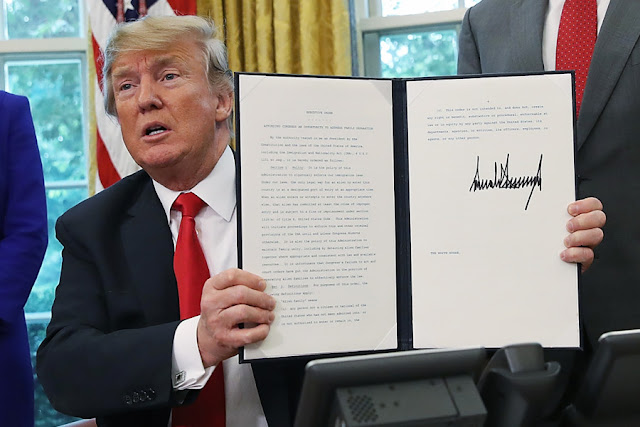 President Trump said Wednesday he will sign an executive order to end separation of migrant families at the border, moving to end a crisis that has engulfed his administration.
Mr. Trump told reporters he still expects Congress to follow up with action, but he’s taking steps now.
“We’re going to be signing an executive order in a little while,” he said. “We’ve got to be keeping families together.”
The president also said he’ll cancel the White House congressional picnic, slated for Thursday, saying it “just didn’t feel right to me.”
While it was not yet clear what the executive order would contain, there had been speculation that the administration was working on a plan to keep families together in detention in the custody of Homeland Security while awaiting criminal proceedings in the courts.
Such a move could raise legal questions.
It also would be a major retreat for the president, who for the last week had blamed Democrats for the separations and said it would take a change in law to stop it.
The fight emerged out of Mr. Trump’s zero tolerance policy, which expanded the jailing of people who try to sneak into the U.S. across the border.
Even as he promised a retreat, Mr. Trump talked about the “dilemma” he said he faced.
“The dilemma is that if you’re weak — like some people would like you to be — if you’re really, really pathetically weak, the country’s going to be overrun with millions of people,” Mr. Trump said. “And if you’re strong, then you don’t have any heart. That’s a tough dilemma. Perhaps I’d rather be strong, but that’s a tough dilemma.”
The crux of the zero tolerance policy is using the criminal code to try to deter illegal immigration. For decades, it’s been a crime to jump the border — though past administrations used those provisions only sparingly.
The Trump administration has said it wants nearly 100 percent prosecutions.
Currently those charged with crimes are supposed to be held by the Justice Department, whose jails are not equipped for family custody. Homeland Security does have some family detention facilities, but they are used for people in the immigration system, not the criminal justice system.
House Republicans’ new immigration bill, expected to be voted on Thursday, includes a provision that would write into law the ability for the government to keep migrants in criminal proceedings in Homeland Security facilities.
The House bill would only apply to parents charged with misdemeanors. Those with felony charges, such as smuggling or reentering the country after a previous deportation, would still go to the Justice Department under the House plan.
Keeping families together in Homeland Security detention will likely require an infusion of cash to create more family detention space.
The Obama administration, which faced its own surge of illegal immigrant families in 2014 and 2015, tried to open family detention centers but was met with fierce opposition by immigrant-rights advocates who said it was cruel to keep families detained.
They would prefer to see families released into the communities.
Another limitation on Mr. Trump is the timeline. Under a court agreement known as the Flores Settlement, children can only be kept in immigration detention for about 20 days.
That gives the government a choice of either releasing the child — which means family separation — or releasing the family as a whole, which is essentially the catch-and-release policy the president objects to.
Source>https://www.washingtontimes.com/news/2018/jun/20/trump-says-sign-something-stop-family-separation/
Posted by theodore miraldi at 1:46 PM