President Trump's nomination of Brett Kavanaugh to replace retiring Associate Justice Anthony Kennedy has set the stage for a bruising confirmation battle, as Senate Democrats and liberal groups vowed to resist what could be a dramatic and long-lasting rightward shift on the Supreme Court.
Within seconds of Trump's announcement in the White House Monday night, the far-left political action committee Democracy for America called Kavanaugh, 53, a "reactionary ideologue" whose confirmation would "directly lead to the deaths of countless women with the dismantling of abortion rights."
And in a statement, the Women's March said ominously: "Trump’s announcement today is a death sentence for thousands of women in the United States."
"Stripping a woman’s ability to make decisions about her own body is state violence," the group continued. "We cannot let this stand. We will raise our voices and take to the streets."
In an embarrassing blunder, though, the Women's March statement began: "In response to Donald Trump's nomination of XX to the Supreme Court" -- indicating that the group didn't expect to have to change its pre-written press release much on Monday night.

“Trump’s announcement today is a death sentence for thousands of women in the United States."
- Women's March statement

WATCH: HEAVY LAW ENFORCEMENT PRESENCE AT SUPREME COURT AS PROTESTERS SPAR
The mood outside the Supreme Court soured quickly throughout the evening, as protesters screamed and jostled in a markedly hostile atmosphere after Trump announced his selection. 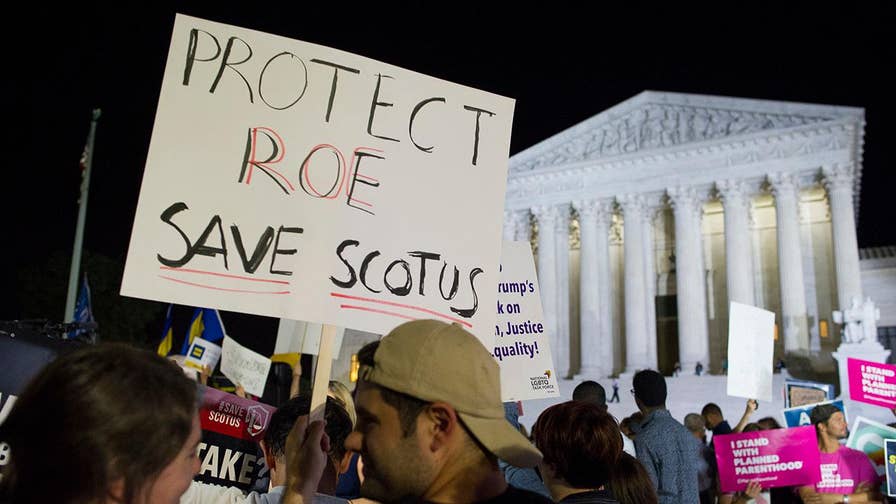 Kavanaugh, who is Catholic and formerly served as a law clerk for Kennedy, has long said he would broadly respect legal precedent, including Roe v. Wade. In his time in the Bush White House and his twelve-year stint on the influential D.C. Circuit Court of Appeals, Kavanaugh has variously alarmed both pro-life and pro-choice advocates.
PELOSI VOWS TO 'AVENGE OBAMA' IN SUPREME COURT SHOWDOWN
Top Senate Democrats, who have long said they would not seriously consider any of the candidates Trump was considering, also vowed to fight Kavanaugh, citing what they called an anti-abortion record.
Senate Minority Leader Chuck Schumer, D-N.Y., called for killing the nomination.
"If we can successfully block this nomination, it could lead to a more independent, moderate selection that both parties could support," Schumer said.
He continued: "In selecting Judge Brett Kavanaugh for the Supreme Court, President Trump has put reproductive rights and freedoms and health care protections for millions of Americans on the judicial chopping block."
All eyes Monday night were on moderate Republicans including Sen. Susan Collins of Maine, as well as several red-state Democrats, including West Virginia's Joe Manchin, North Dakota's Heidi Heitkamp and Indiana's Joe Donnelly.
WATCH: WHO IS BRETT KAVANAUGH, TRUMP'S PICK TO REPLACE JUSTICE KENNEDY?

Brett Kavanaugh's record as a judge and lawyer is clear: hostile to health care for millions, opposed to the CFPB & corporate accountability, thinks Presidents like Trump are above the law – and conservatives are confident that he would overturn Roe v. Wade. I'll be voting no.

Twitter Ads info and privacy
Their votes could prove decisive in the upcoming nomination decision, because Republicans hold a slim 51-49 majority in the Senate. One prominent Republican, John McCain, is expected to be unable to vote because of his ongoing battle with brain cancer. Vice President Mike Pence could break a 50-50 tie in the Senate.
That means Republicans can't afford to lose any Republican votes unless they also pick off at least one Democratic senator.
In a statement, Collins -- who has vowed not to vote for a nominee who would overturn Roe v. Wade -- said only that she would scrutinize Kavanaugh carefully. 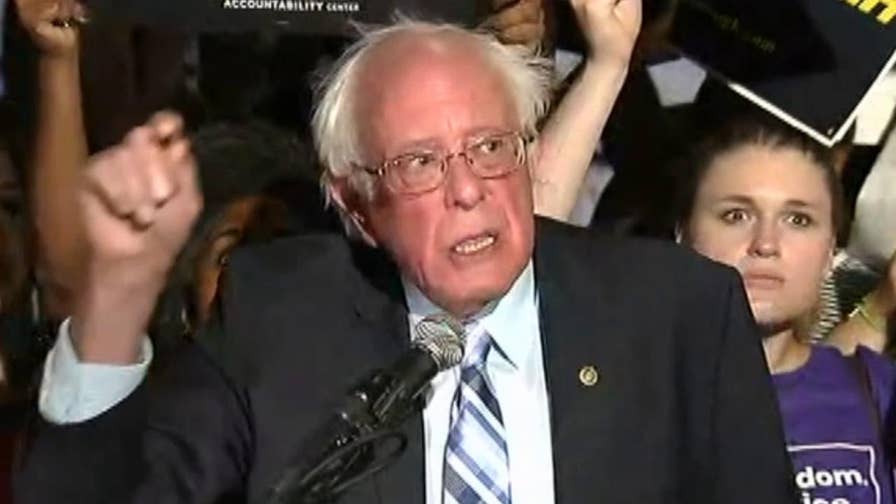 "Judge Kavanaugh has impressive credentials and extensive experience, having served more than a decade on the D.C. Circuit Court of Appeals," Collins said. "I will conduct a careful, thorough vetting of the President’s nominee to the Supreme Court."
Donnelly, a Democrat holding a vulnerable seat in red Indiana, echoed that assessment.
"I will take the same approach as I have previously for a Supreme Court vacancy," Donnelly said. "Following the president’s announcement, I will carefully review and consider the record and qualifications of Judge Brett Kavanaugh."
Kavanaugh's lengthy insider D.C. record -- from his tenure on the bench, as well as his work in the Bush White House and on the Kenneth Starr report that led to Bill Clinton's impeachment -- threatened to delay the confirmation process amid lawmakers' promises to vet the new nominee.
Pro-choice advocates will likely focus on Kavanaugh's decisions in cases like Priests for Life v. HHS, in which Kavanaugh wrote a dissent arguing that ObamaCare's contraceptive coverage requirements put undue burdens on some religious beliefs.
They are also expected to emphasize Garza v. Hargan, a recent case in which Kavanaugh dissented from a ruling that the Trump administration should permit an illegal immigrant in federal custody to have an abortion. Kavanaugh's dissent angered both sides of the abortion debate, because while Kavanaugh did not endorse the immigrant's right to an abortion, his dissent also did not specifically deny her that right in all cases. 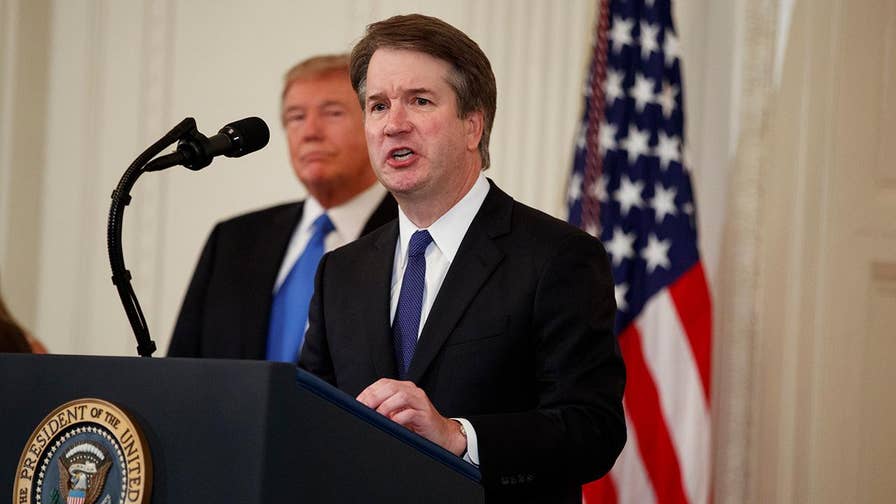 Meanwhile, pro-gun rights advocates might find comfort in Kavanaugh's dissent in the landmark Heller case, when it was before the D.C. Circuit. Kavanaugh argued that a D.C. ordinance unconstitutionally infringed on residents' right to own semi-automatic weapons by requiring them to keep them unloaded and unassembled, or bound by a trigger lock.
The Supreme Court eventually took the case and struck down the ordinance, and held that the Second Amendment protects the possession of semi-automatic weapons for purposes unrelated to militia use.
Despite Kavanaugh's paper trail, White House press secretary Sarah Sanders said Monday that she expected Kavanaugh to be confirmed by Oct. 1.
But despite that optimistic claim, top Republicans predicted an epic tussle in the days ahead.
Republican Sen. John Kennedy of Louisiana, a member of the Judiciary Committee, said he was bracing for "rough, tough, down in the dirt, ear-pulling, nose-biting fight."
For now, the next steps in the whirlwind process will be pleasantries. On Tuesday, Vice President Mike Pence and White House counsel Don McGahn will escort Kavanaugh to Capitol Hill.
They will then put him in the care of the so-called "sherpa," former Arizona Sen. Jon Kyl, who will guide Kavanaugh through the nomination process, including his meetings with senators.
Fox News' John Roberts contributed to this report.
Source>http://www.foxnews.com/politics/2018/07/10/kavanaugh-nod-touches-off-supreme-court-confirmation-battle-dems-warn-deaths-countless-women.html
Posted by theodore miraldi at 8:53 AM