'How Many Times Did You Look So INNOCENT Into Your WIFE'S Eyes and LIE to Her?'

Shouting match on the Hill after Gohmert blasts 'smirking' Strzok, asks about infidelity at hearing.

The Democrats on the Committee Support a man who Lied Under Oath, allowed Hillary Clinton to avert Criminal Charges, and for a follow-up, CHEATED on his Wife behind her back. Not hard to see why he supports Democrats. This man has no character!
...tmiraldi

An already raucous hours-long Congressional hearing into FBI agent Peter Strzok's apparent anti-Trump bias boiled over on Thursday afternoon, as a top Republican asked the "smirking" Strzok whether he was lying under oath the same way he "lied" to his wife while he carried on an affair with now-former FBI lawyer Lisa Page.
"The disgrace is what this man has done to our justice system," Rep. Louie Gohmert, R-Texas, shouted over objections by Democrats. "I can't help but wonder, when I see you looking there with a little smirk, how many times did you look so innocent into your wife's eyes and lie to her about Lisa Page?"
Democrats immediately erupted into more objections, with one yelling, "Mr. Chairman, this is intolerable harassment of the witness" and another calling out, "You need your medication."
Strzok and Page exchanged numerous text messages on their FBI-issued phones expressing hostility toward then-candidate Trump in the run-up to the 2016 presidential election, even as Strzok was a lead investigator on the Hillary Clinton and Russian meddling probes.
The two also communicated on their work phones to hide their affair from their spouses, according to a bombshell report released last month by the Justice Department's inspector general. 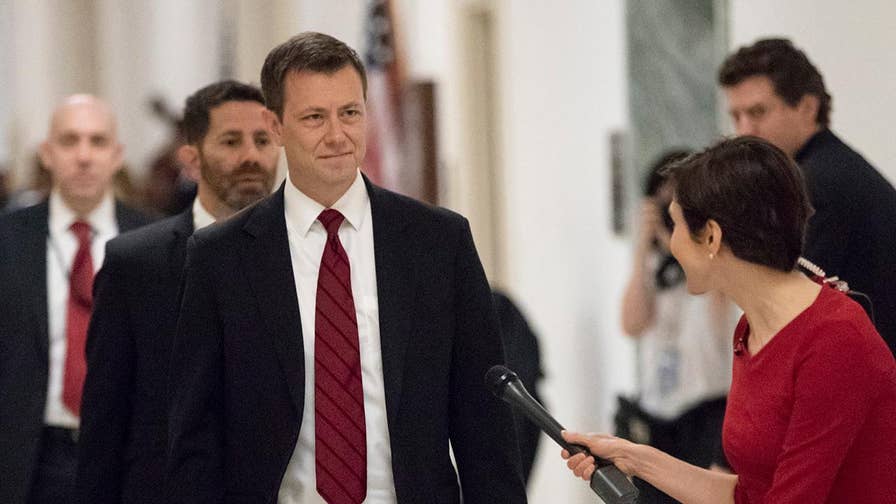 FBI LOVEBIRDS USED WORK PHONES TO HIDE AFFAIR, IG FINDS
Page had been expected to testify Wednesday in a closed-door session, but backed out at the last minute, saying she needed more time to prepare. She is now expected to interview privately on Friday with GOP leaders.
Gohmert's question was just one of several tense moments in the hearing, the Republicans' first opportunity to question the embattled FBI agent publicly. Democrats frequently interrupted the proceedings during questioning by GOP representatives.
At one point, Republicans threatened Strzok with contempt for initially refusing to answer questions on the Russia probe.

As I head out to a very important NATO meeting, I see that FBI Lover/Agent Lisa Page is dodging a Subpoena & is refusing to show up and testify. What can she possibly say about her statements and lies. So much corruption on the other side. Where is the Attorney General? @FoxNews

Twitter Ads info and privacy
Strzok, throughout it all, remained defiant and maintained that he did not show bias in those infamous messages with Page -- saying that while he had his own political opinions, they did not impact his official investigative actions.
Republicans sharply disputed that assessment, with Rep. Darrell Issa later making Strzok read examples of those texts aloud. Among them, Strzok read one message in which he called Trump a "disaster," and another calling him an "idiot."
FIREWORKS AT STRZOK HEARING, AS GOP LEADERS THREATEN CONTEMPT
The initial contempt threat surfaced after House Oversight Committee Chairman Trey Gowdy, R-S.C., questioned "how many witnesses" Strzok interviewed before an August 2016 text from Strzok to Page stating "we'll stop" then-candidate Trump from becoming president. 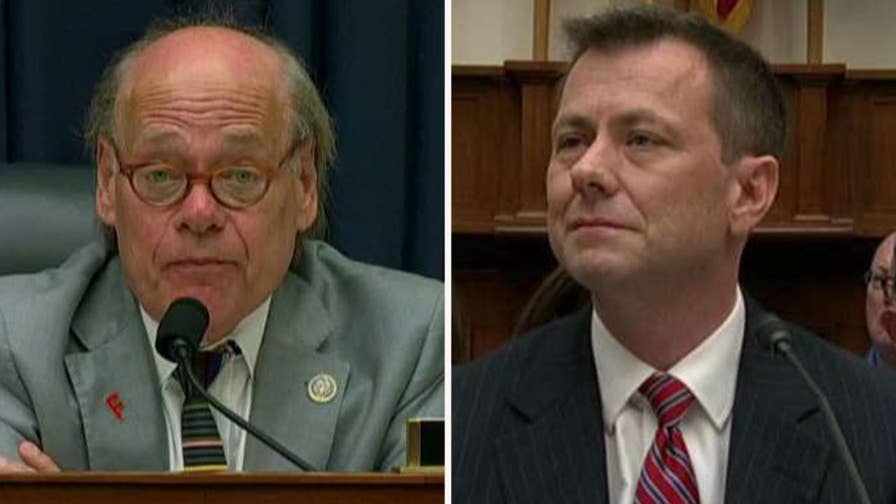 Strzok said he was not able to answer the question based on instructions from FBI counsel. House Judiciary Committee Chairman Bob Goodlatte, R-Va., rejected Strzok's claim.
"Mr. Strzok, you are under subpoena and required to answer the question," Goodlatte said.
This touched off a heated dispute. Judiciary Ranking Member Jerry Nadler, D-N.Y., blasted Goodlatte for putting Strzok in an "impossible position," while Strzok claimed he was there voluntarily. Goodlatte said Strzok could consult only with his own attorney, not the FBI's.

Several other committee members chimed in, blasting top Republicans on the committee, with Nadler even motioning to adjourn the hearing all together.
Gowdy also tore into Strzok at the opening of Thursday's hearing, saying he showed "textbook bias" on the job. This later escalated into a heated exchange in which Strzok claimed he was kicked off Special Counsel Robert Mueller's probe because of "perception," not because of bias.
After Strzok said he didn't "appreciate" how Gowdy was characterizing those events, the congressman fired back: “I don’t give a damn what you appreciate, Agent Strzok.”
However, there were moments for Congressional Democrats to lend some support for Strzok. At one point, Rep. Steve Cohen, D-Tenn., even suggested that Strzok, a former Army officer, deserved a Purple Heart for his service to the country.
Fox News' Brooke Singman contributed to this report.
Source>http://www.foxnews.com/politics/2018/07/12/gop-rep-gohmert-unloads-on-smirking-strzok-how-many-times-did-look-so-innocent-into-your-wifes-eyes-and-lie-to-her.html
Posted by theodore miraldi at 5:28 PM