Is Hillary Clinton SECRETLY Planning to RUN in 2020? 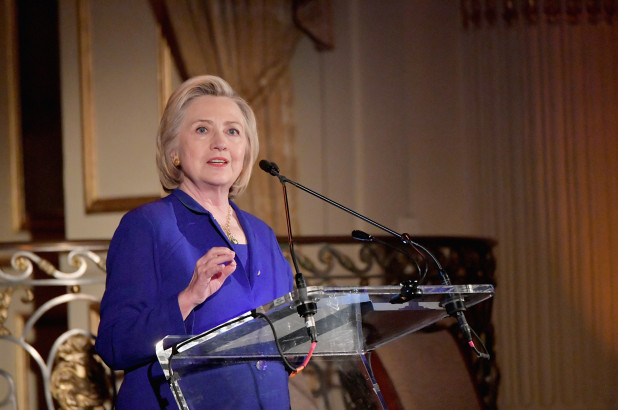 The messages convey a sense of urgency, and are coming with increasing frequency. They are short, focused reactions to the latest “outrage” committed by President Trump.
Some end by asking for money, some urge participation in protests. All read as if they are sent from the official headquarters of the resistance.
Hillary Clinton is up to something.
Five times in the last month alone, she sent e-mails touting her super PAC’s role in combating President Trump. Most seized on headline events, such as the family-separation issue at the southern border.
Under the message line, “horrific,” she wrote June 18: “This is a moral and humanitarian crisis. Everyone of us who has ever held a child in their arms, and every human being with a sense of compassion and decency should be outraged.” She said she warned about Trump’s immigration policies during the 2016 campaign.
Three days later, she was back again, saying that her group, Onward Together, raised $1 million and would split it among organizations working to change border policy, including the American Civil Liberties Union and a gaggle of immigrant, refugee, Latino and women’s groups.
And the day after Supreme Court Justice Anthony Kennedy announced his retirement, Clinton introduced a newly minted resistance partner. Called Demand Justice, it promises to protect “reproductive rights, voting rights and access to health care” by keeping Senate Democrats united in opposing any conservative Trump nominee.
The instant, in-house nature of Demand Justice was reflected by the name of its executive director: Brian Fallon, Clinton’s campaign press secretary.
In truth, Fallon’s role doesn’t tell us something we didn’t know. Onward Together, formed in May of 2017, is a Clinton 2020 campaign vehicle in waiting.
Its homepage says the group “is dedicated to advancing the vision that earned nearly 66 million votes in the last election.”
Advancing the vision? More like advancing the candidate who collected those votes despite not having a vision.
With the Democratic Party locked in a battle between its far left wing and its far, far left wing, no single leader has emerged to unite it. Clinton is trying to play that role by being a mother hen to the fledgling activists drawn to politics by their hatred of Trump.
If they were active in 2016, most probably supported Bernie Sanders in his primary challenge to Clinton. But by helping to fund them now, she is putting them in her debt for later.
Ah, but will she need their support later? Is she really going to make a third run for the White House?
Not long ago, I told a group of friends, all liberal Dems, that I believed she was keeping open the possibility of a rematch against Trump, and might already have decided to run.
It was unanimous — they were horrified. “I would not give her a single cent,” one man, formerly a big donor to Clinton, said emphatically.
Their reasons are no surprise: Her moment has passed, she was a terrible candidate and her endless claims of victimhood are tiring rather than inspiring. It’s time to find new blood.
Those assessments are unassailable, and certainly are shared by the 20 or so Dems lining up to take their shot at the nomination.
Moreover, there isn’t any clamoring for another Clinton run in Hollywood or other leftist hotbeds. They want a new blockbuster, not a sequel to failure.
So she’s toast, right? Maybe.
On the other hand, the odds are zero that she is playing community organizer just to be a kingmaker. When it comes to money and power, the Clintons assume charity begins at home.
Here’s how I believe she sees the playing field, and why she can’t be ignored.
First, because there’s no clear front-runner for the nomination 18 months into Trump’s presidency, Clinton remains the closest thing to an incumbent. She’s also got numerous advantages, from name recognition to campaign experience to an off-the-shelf Cabinet, that could give her a head start.
Second, a crowded, diverse field diminishes the chances of anyone knocking her off. Recall how Trump outlasted 16 GOP rivals by having a committed core of supporters that grew as the field shrunk. Clinton could be in a similar position — unpopular among many, but also unbeatable by a single opponent.
Third, looking ahead to the 2020 primaries, she sees no reason to fear the favorite daughters and sons in key blue states. She would almost certainly beat Sen. Kamala Harris in California, Sen. Cory Booker in New Jersey and Gov. Andrew Cuomo in New York.
And please — forget Sanders and Joe Biden. Sanders is already 76 and Biden, at 75, has never been a viable candidate for president and still isn’t.
Fourth, money is not an issue. Some donors will resist Clinton at first, but any Dem nominee can count on all the money in the world to run against Trump.
To be clear, there are scenarios where Clinton doesn’t run. Health reasons, for example, or a younger rival could rocket to the top of the pack and become the party’s next Barack Obama. Either way, recurring nightmares of two previous defeats would send her back to wandering through the Chappaqua woods.
For now, I am convinced Clinton wants to go for it. Doubters should recall the line about pols who get the presidential itch: There are only two cures — election or death.
Besides, the third time could be the charm.

The Empire State of anarchy

For their next trick, will New York Dems try to secede from the United States?
First, Gov. Cuomo proposed cockamamie schemes to avoid new federal limits on state and local tax deductions. Now Manhattan Assemblyman Richard Gottfried fantasizes about a “workaround” of the Supreme Court ruling that allows municipal workers to skip union fees.
Remember way back, when Dems warned Donald Trump would not accept the election results if he lost? Well …

Doth protest too much

Most immigrants are grateful for the opportunity and freedom they find in America. Then there is Therese Patricia Okoumou.
An immigrant from the Democratic Republic of the Congo, where civil war is endless and where protesters are shot, the 44-year-old Okoumou caused visitors to be evacuated from Liberty Island on July 4th when she climbed the base of Lady Liberty to protest American immigration policies.
She was also arrested in a demonstration last year. In 2011, she was hit with $4,500 in fines after illegally posting ads for services as a personal trainer, The Post reports.
Since America isn’t up to her standards, Okoumou should try another country. Perhaps a return to her homeland would make her happy.

The stomach-turning quote of the week comes from Joey Chestnut, the Nathan’s July 4th hot-dog-eating champ. Judges initially ruled he ate 64 dogs in 10 minutes, but Chestnut knew he had eaten 10 more.
“At the end,” he said, “I knew I’m at 74 — 64 feels a lot different in the stomach than 74.”
Source>https://nypost.com/2018/07/07/is-hillary-clinton-secretly-planning-to-run-in-2020/
Posted by theodore miraldi at 6:26 AM